The best ever putters, and how they did it

By Inside Golf on June 19, 2018 Comments Off on The best ever putters, and how they did it

By Terry Price on June 27, 2017 Comments Off on The Scoring Zone

Over the past year it has been wonderful to see the incredible improvement my students have enjoyed from tee to green. All are hitting the ball magnificently but what really excites me are the benefits derived in their short game from the use of the TrackMan technology along with teaching skills learned from my time […]

The secret to staying still? Move your body!

By Mark Allen on June 2, 2016 Comments Off on The secret to staying still? Move your body! mark allen, putting

When I played on tour I was obsessed with staying still when I putted. Greg Norman looked so quiet when he putted. So did Seve. And so did Nick Faldo. Then came Tiger – who was as still over a putt as I’d ever seen. The bigger the putt, the quieter I wanted to look […]

Getting a grip on putting

If you are having a lot of trouble missing way too many short putts, then please take five minutes to read this article and seriously consider what I am proposing. Over the past few weeks, two new clients have phoned me with the good news that the grip I have suggested they use (combined with fundamental technical drills […]

Wrists and putting do not go hand in hand

Are you the type of golfer who really struggles controlling the distance of your putts? In this issue we are going to show you a simple drill that you can do either at home, the office or on the putting green at your golf course which will improve your ability to control the speed of […]

Stay in your putt

By Glenn Whittle on May 1, 2014 No Comment glenn whittle, golf instruction, putting

Every now and then when I am playing, I remember one of the keys that I used to use regularly when competing in golf tournaments. This happened recently when I found myself doing exactly what I encourage my clients not to do, which is follow the ball with your eyes and head as soon as […]

Do you have the correct amount of loft on your putter?

You don’t often hear many golfers of any skill level talk about the loft of the putter, mainly due to the fact that they don’t even know that the putter should actually have loft, let alone how much is right for them. Putting is about feel, touch, seeing the line, reading the putt correctly, and […]

Control the speed of your putts

Are you one of the many golfers who have difficulty controlling the distance of your putts? It is one of the most common concerns people talk to me about when they visit me at The Sydney Putting Studio. Basically they are getting the read and line generally OK but then either waste shots, lose confidence, […]

What is the correct putting stroke for me?

One of the common questions golfers ask me during a putting lesson is which method of putting stroke do I teach people? My initial thought is: whichever one I think is going to help the player putt consistently well. I don’t teach one single method to putt. I don’t actually say this to the players, however, as I know […]

Starting your putts consistently on line

Whenever I am giving a putting lesson, I always start by watching the player putt outside on the practice green. This allows me time to see firsthand their routine, the accuracy of their read of the slope, the types of questions or comments they make as well as seeing their technical fundamentals such as posture, […]

This article was specifically written with golfers in mind who are missing way too many short putts. Having the benefit of designing putters for Precision Putters. I am fortunate enough to be able to ask for extreme but specific specifications on some putters every now and then, and this has been the case recently with […]

The effects of an incorrect lie angle on your putter

In my last article, I wrote about the effects of lie angle with your iron clubs, and I mentioned that the process of combining golf instruction with club fitting is very important, mainly because the two need to go hand-in-hand. This is no different when looking at the effect that lie angle has on putting […]

When I am coaching, it is common to see a number of golfers arrive to practice their putting. The coach in me cannot help but take a sneak peek at their basic technique, in particular their posture and putter length. In a nutshell, I am surprised just how many golfers are using putters that are […]

Constant grip pressure is the key to putting

I often ask golfers whether they think good putters on tour have a light or firm hold on the putter when they are putting well. Invariably these golfers answer “light, but I think mine is too firm.” Although I have seen a few good putters come through The Sydney Putting Studio that have a firm […]

This month we’ll discuss lag putting, a critical skill to improving around the greens (and lowering your scores).

What putterhead weight and swing weight should you be using?

By Glenn Whittle on July 26, 2012 Comments Off on What putterhead weight and swing weight should you be using? glenn whittle, golf instruction, putting

When hitting a putt, one of our major goals is to get the ball rolling as soon as possible, we have discussed in previous articles that the reason we need loft on our putter face is to assist in lifting the ball out of the small indent the ball sits it when it comes to […]

Which alignments are most important in putting?

By Glenn Whittle on May 1, 2012 No Comment glenn whittle, golf instruction, putting

Straight back and straight through – rubbish!

Practice does not make perfect!

The way you practice has a bigger influence over how you perform under pressure than anything else. If you are like most golfers you get to the golf course half an hour or so before you play, putt a few balls across the practice green, and try and work out whether they are fast or […]

Why do some putts turn or break more than others? Here are a few quick tips to help you on your way to reading the greens better and improving your score. 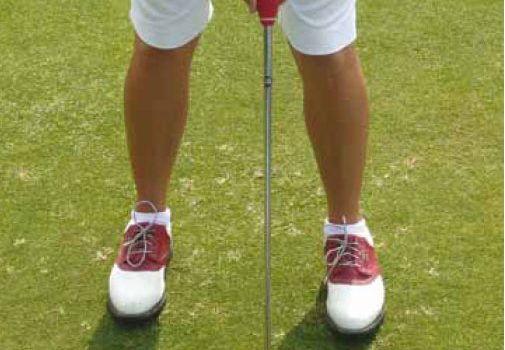