By David Newbery on December 19, 2014 Comments Off on Roo Beauty: Aussie winners in 2014 year of the roo, yearoftheroo

DESPITE going winless in the majors, it’s been a super year for Australian golfers around the world. For the record, more than 20 Aussies entered the winner’s circle including six on the toughest tour of all – the US PGA Tour. Adam Scott, Jason Day, John Senden, Steven Bowditch, Matt Jones and Geoff Ogilvy flew […]

By Inside Golf on October 19, 2014 Comments Off on Hend captures Hong Kong Open hong kong open, scott hend, year of the roo

Australian Scott Hend captured his sixth Asian Tour victory and his first on the European Tour with a dramatic playoff win over Angelo Que at the Hong Kong Open. Starting the day one back of the lead behind fellow Aussie Marcus Fraser, the 41-year-old Hend cruised the front nine in level par with two birdies […]

By Inside Golf on August 4, 2014 Comments Off on Geoff Ogilvy wins in Reno barracuda, featured, geoff ogilvy, reno-tahoe open, year of the roo, yearoftheroo

Inside Golf’s prediction that 2014 would be the “Year of the Roo” has gained further momentum,  with  former U.S. Open Champion Geoff Ogilvy becoming the sixth Australian to win on the PGA TOUR this year. Ogilvy took top honours in this week’s Barracuda Championship (formerly the Reno-Tahoe Open), with a five point victory in the […] 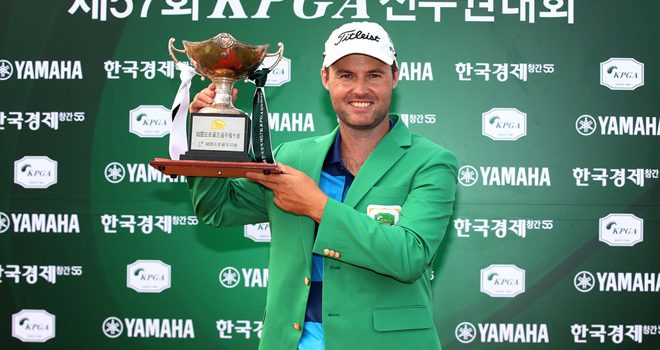 By Inside Golf on May 25, 2014 No Comment World Cup of Disabled Golf, disabled golf, featured, year of the roo

Geoff Nicholas and Shane Luke of Australia chased down South Africa’s Reinard Schuhknecht and Daniel Slabbert over the last four holes at Zebula Golf Estate and Spa to clinch the inaugural World Cup of Disabled Golf. The South Africans took a one stroke lead into the final round and stretched the gap to two shots […]

By Inside Golf on May 19, 2014 No Comment asian tour, featured, marcus both, philippine open, year of the roo

Marcus Both of Australia secured an emphatic victory at the ICTSI Philippine Open to revive his career after thinking of quitting the game last year. The towering Aussie, who lost his Asian Tour card last year for the first time since 2003, posted a two-under-par 70 for a winning total of six-under-par 282 at the […]

Bowditch on top in Texas

By Inside Golf on March 31, 2014 No Comment bowditch, featured, valero texas open, year of the roo

Australian Steven Bowditch has claimed his first PGA TOUR win at the Valero Texas Open and earned a place in The Masters. Coming into the final round with a three-shot lead Bowditch, like others in the field, found the Greg Norman designed TPC San Antonio layout challenging on the Sunday. With a front-nine that included […]

Another win for Webb!

By Inside Golf on March 25, 2014 No Comment featured, karrie webb, year of the roo

Queenslander Karrie Webb has secured her second LPGA title for the year after firing a final round of nine-under-par 63 at the Wildfire Go Club in Phoenix. The 39-year-old conjured one of her greatest rounds to reel in the leaders and win the JTBC LPGA Founders Cup, her 41st win on the LPGA Tour and […]

As good as it gets, says Senden Sr

JOHN Senden gave his father Gerry “the best birthday present ever” when he won the Valspar Championship in Florida. “My birthday was on the 11th of March and I told John he could win the tournament for my birthday,” Gerry Senden, 74, told Inside Golf. “Then I spoke to him straight after he won and […]

By Richard Fellner on January 1, 2014 No Comment year of the roo

While 2013 marked a banner year for our Aussie professionals on the various tours, 2014 presents an opportunity for even more success. Inside Golf’s Richard Fellner and David Newbery highlight some of the notable players to keep an eye on this year.