Bubba Watson claimed a thumping 7 and 6 victory over Kevin Kisner to win a second World Golf Championships title at the WGC – Dell Technologies Match Play. Kisner had beaten Alex Noren in a high-quality semi-final and the championship match looked set to be a tight affair but Watson won the first five holes […]

Phil thrills in Mexico to capture first win since 2013

By Inside Golf on March 5, 2018 Comments Off on Phil thrills in Mexico to capture first win since 2013 WGC

Phil Mickelson eclipsed a moment of magic from Justin Thomas to beat his compatriot in a play-off at the WGC – Mexico Championship and secure his first title since winning the Open in 2013. The American pair finished tied on 16 under par after an enthralling final round at Chapultepec Golf Club. Mickelson saw his […]

By Inside Golf on February 27, 2018 Comments Off on Australians set to challenge Johnson at WGC-Mexico Championship WGC

A casual observer likely would not have realized the history made solely from the moment alone. A stoic Dustin Johnson, with a short tap-in and a quiet fist pump. It appeared, on the surface, like any other win under his belt. But when Johnson raised the venerable Gene Sarazen Cup in 2017—its classic, yet intricate […]

Aussies at the WGC – Bridgestone Invitational

By Inside Golf on August 1, 2017 Comments Off on Aussies at the WGC – Bridgestone Invitational WGC, bridgestone invitational 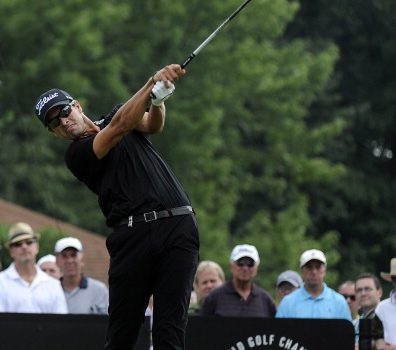 When a tournament has only been held 18 times, and one guy has won seven titles, wins by anybody else can, perhaps, feel a bit hard to come by. Such was players’ prevailing attitude when Tiger Woods was winning World Golf Championships-Bridgestone Invitationals at what was a remarkable pace. Consider that Woods won the inaugural […]

By Inside Golf on March 27, 2017 Comments Off on Johnson defeats Rahm in WGC – Dell Match Play final WGC, dustin johnson

Dustin Johnson held off a brilliant fightback from Jon Rahm to claim a one up victory in the final of the WGC – Dell Technologies Match Play, making him the first player in history to have won all four World Golf Championships and just the second player win back-to-back WGC events. The World Number One […]

By Inside Golf on March 6, 2017 Comments Off on Johnson confirms number one status with WGC win WGC, dustin johnson

World Number One Dustin Johnson denied Englishman Tommy Fleetwood his first World Golf Championship victory in Mexico as the American confirmed his status as the best player on the planet with a one-shot victory at Club de Golf Chapultepec. The reigning US Open champion recorded a closing 68 for a 14 under total, one better […]

By Adam Farmer on February 23, 2012 No Comment WGC, accenture

32 matches completed, 32 players left including two Australians. Jason Day rallied hard and in the end proved triumphant after 19 holes against Spaniard R. Carbrera Bello. It was an up and down affair early however Carbrera Bello stretched the lead to 3 up on the 14th. Needing something something special, Day dug deep within […]

Australian Adam Scott has won the World Golf Championship–Bridgestone Invitational in a sensational display of golf that held off challenges from many of the up-and-coming young guns of the game.