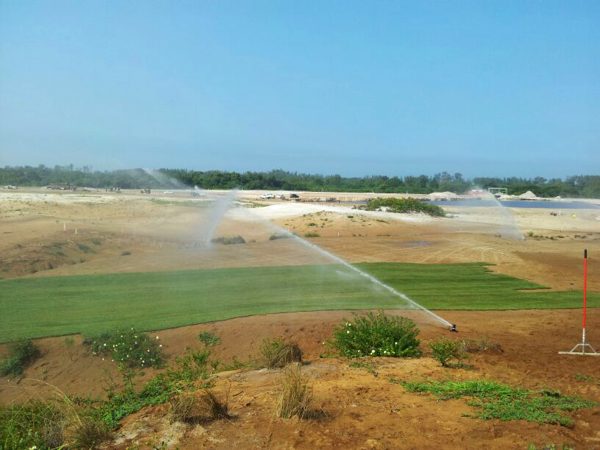 The Olympic Golf Course in Barra de Tijuca, Rio de Janeiro is taking shape. On Tuesday 20 May the process of planting grass commenced on the first of the 18 holes, hole number 8. Grassing is considered to be the final stage of the project and the predicted timeline for grass growth is 11 months.

“We have taken another important step in constructing the Olympic Golf Course today. The planting of grass is the last construction activity for each hole on the course, following the completion of the earthworks, irrigation and finishing,” explained Agberto Guimarães, Rio 2016 Director of Sport and Paralympic Integration.

The golf venue, which began construction in April 2013, is considered to be one of the legacies of the 2016 Games. Following the Olympic competitions, it will be opened to the public and will become the first public golf course in the city of Rio, contributing to the popularization of the sport, which is returning to the Olympic programme after 112 years.

The construction project has been riddled with obstacles, following land disputes and legal battles, and the project was considered to be at risk of failing to be completed on time. It has been hoped that “test events” would be staged on the course prior to the Olympics, and with grassing underway, this may still be achievable.

The golf course will be built at Reserva de Marapendi in Barra da Tijuca, the district that will contain the largest number of Rio 2016™ Olympic Games venues. It will be a unique Olympic Games venue, located approximately five kilometres from the Athletes’ Village and seven kilometres from the Main Press Centre (MPC) and the International Broadcast Centre (IBC), South of Avenida das Americas and North of Lagoa de Marapendi.