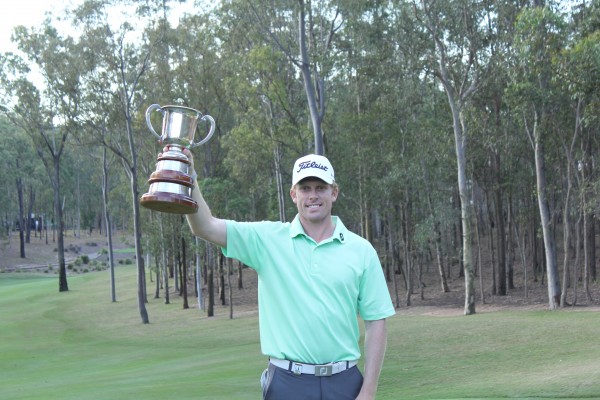 Starting the final round six shots off the lead, Dodt fired an impressive 67 today for a tournament total of 7-under 281.

He claimed the title by two shots from South Australian Tom Bond.

Having practiced at the Brookwater Golf and Country Club as an amateur, Dodt was confident from the start of the week that he could take out the title.

“I knew I was playing well and I know the course well. I had a good game plan and I stuck to that all week,” said Dodt.

Dodt played under the radar for most of the final round until four birdies in his closing six holes pushed him into the lead, a birdie on 18 sealing the title for him.

“I knew if I made some birdies early to put some pressure on, then get to the back nine within two or three of the lead that I would be a chance,” added Dodt.

“I was fortunate to do that and I am proud of myself for the way I handled it.”

This is Dodt’s first victory since winning the 2010 Avantha Masters on the European Tour and Asian Tour.

“This is my second win as a Professional so I am pretty pumped right now. To win your State Open means a lot,” added Dodt.

“I have worked hard in the last few months and it has paid off.”

Overnight leader and eventual runner-up Bond needed a birdie on the 18th to force a playoff with Dodt but a bogey put an end to his campaign.

Finishing the day on 3-over the card for a tournament total of 5-under 283, Bond was disappointed not to have closed out the tournament.

“At the moment I am feeling pure disappointment. I hit it well enough today to win comfortably but my putting let me down.”

“But that is why it’s such a tough game because you have to have everything working.”

“It was good being in the last group in a tournament like this and hopefully next time I am in that position I will do better.”

For all the final scores from the Isuzu QLD Open please click here.