By Inside Golf on February 25, 2019 Comments Off on Nisbet cruises to Queensland PGA victory

Daniel Nisbet has won the 2019 Coca-Cola Queensland PGA Championship presented by Toowoomba Regional Council in a dominant performance in his home state. Starting the day with a two shot lead, Nisbet won the title by six shots from Deyen Lawson and Harrison Endycott with rounds of 66, 63, 63 and 64 for a tournament […]

By Inside Golf on March 22, 2016 Comments Off on David Klein wins QLD PGA Championship

German David Klein has secured his maiden victory on the PGA Tour of Australasia winning the Coca-Cola Queensland PGA Championship in a thrilling one-hole playoff at City Golf Club in Toowoomba. Flying under the radar for much of the week, Klein started the final round 10-under the card and trailing overnight leader Kristopher Mueck by […]

By David Newbery on September 18, 2014 Comments Off on Queensland Open rises to occasion queensland open

GEEZ, there were a lot of positives to come out of the Isuzu Queensland Open at Brookwater Golf Club, according to Golf Queensland manager golf operations Luke Bates. He told Inside Golf crowds were up 40 per cent on last year and more than 2000 schoolchildren were introduced to the game. “We doubled the numbers,” […]

Queensland’s Andrew Dodt has won the 2014 Isuzu QLD Open played at Brookwater Golf and Country Club. Starting the final round six shots off the lead, Dodt fired an impressive 67 today for a tournament total of 7-under 281. He claimed the title by two shots from South Australian Tom Bond. Having practiced at the […]

By David Newbery on March 5, 2014 No Comment anthony summers

MOST players would have given up a long time ago, but not Anthony Summers. The New South Welshman ended a 23-year drought for his first title of his career. Summers turned professional in 1991 and last month registered his maiden victory at the Coca-Cola Queensland Championship at City Golf Club, Toowoomba. The 44-year-old carded rounds […]

Senior picks up another cup–without hitting a shot 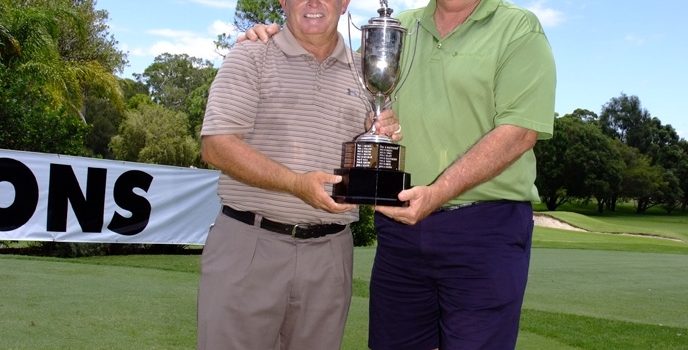 PETER Senior’s trophy cabinet is starting to get a little crowded after he picked up another trophy when he was presented with the Queensland PGA Championship cup.