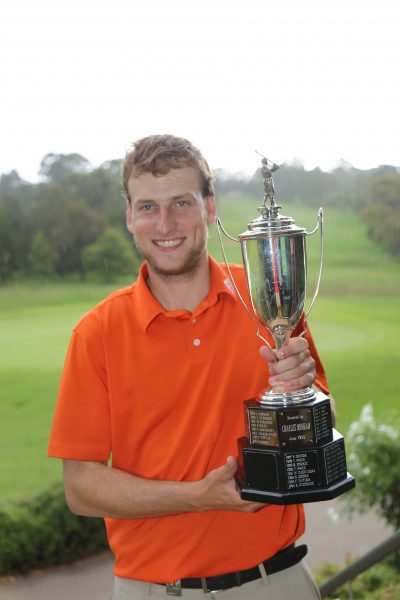 German David Klein has secured his maiden victory on the PGA Tour of Australasia winning the Coca-Cola Queensland PGA Championship in a thrilling one-hole playoff at City Golf Club in Toowoomba.

Flying under the radar for much of the week, Klein started the final round 10-under the card and trailing overnight leader Kristopher Mueck by three shots.

Klein opened his final round campaign quickly firing back-to-back birdies to make his ascension up the leaderboard, his only blemish came on the par-4 9th hole.

Tied for the lead with Queenslander Tim Hart by the end of regulation play, it was back to the 18th for the pair to determine a winner. Hart’s tee shot went wayward ending in the trees, requiring him to chip out to then get up and down for par.

Klein, who struck a beautiful tee shot, landed his ball on the left hand side of the 18th fairway with a perfect line to the pin setting him up to make a winning birdie.

“I set myself a goal to go 6-under, two on the front and four on the back, I started with a birdie on one and two and then just played pretty solid.”

For Hart, the runner-up finish was a bitter pill to swallow.

“I’m a bit disappointed after the last hole, I really played well all day to get myself in that position. I didn’t know the standings on the leaderboard which probably helped, but that’s no excuse.”

“This is where you want to be, you want to be contending for four round tournaments and I’ve been playing pretty well. I had a good year last year in the pro-ams and a good couple of tournaments to start this year so I’m just building on that.”

With this win, Klein receives $18,750 and Official World Golf Ranking Points, plus full exemption on to the PGA Tour of Australasia for the remainder of this season plus a further two years.

Rounding out the top-10 on 14-under the card were Christopher Wood (QLD), Darren Beck (nsw) and Kristopher Mueck (VIC). A further shot back on 13-under the card were Michael Sim (WA) and Steven Jeffress (WA), followed by Daniel Pearce (NZ), Taylor Cooper (QLD), Tom Power Horan (VIC), Daniel Valente (VIC) and Cory Crawford (QLD) who ended their week on 12-under the card.

Queensland amateur Anthony Quayle won the low amateur plate after firing a final round of 7-over 77 to end his week on 1-over the card.

From Toowoomba the PGA Tour of Australasia will head to Royal Port Moresby Golf Club in Papua New Guinea for the South Pacific Export Radler PNG Open from the 21-24 March.

For all final scores from the Coca-Cola Queensland PGA Championship please visit pga.org.au