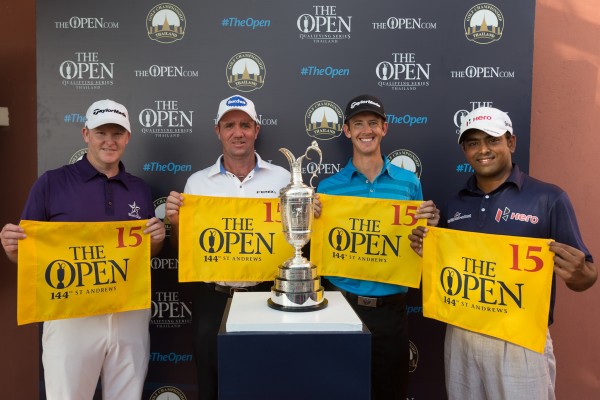 Marcus Fraser narrowly missed out on claiming his first win since 2010 at the 2014 Thailand Golf Championship, but his disappointment was largely offset by the knowledge that he had qualified for The Open at St Andrews next year.

The Australian, who finished in a tie for second alongside Martin Kaymer, a shot behind winner Lee Westwood, earned one of four places in the game’s oldest Major that were up for grabs at the Thailand Golf Championship, which forms part of the Open Qualifying Series.

“That’s why I came up here – to try and get one of those spots at The Open at St Andrews next year, so it’s great, I’m excited,” said Fraser, who bogeyed Amata Spring Country Club’s demanding 18th hole to miss the opportunity of forcing a play-off with Englishman Westwood.

Fraser’s fellow countryman Scott Hend (fifth), India’s Anirban Lahiri and Jonathan Moore of the United States (tied sixth) were the other non-exempt players to earn their places in the field at the Home of Golf in 2015.

“The Open at St Andrews in 2005 was the first Major I ever played,” said Fraser, who has been out of the game for most of the year due to a hand injury. “I remember I was jumping out of my skin on the first tee, but hopefully I’ll be a bit calmer next year.

“I’m really looking forward to getting back to The Open. It’s my favourite tournament – it’s the best tournament in the world.”

Long-hitting Hend, who won the Hong Kong Open in October to earn his European Tour card for next season, was equally effusive about winning his ticket to Scotland.

“I’m very excited. I was thinking more about the four spots in The Open [than winning the tournament]. It created a bit more pressure because I really wanted desperately to play in another Open. It’s awesome,” said Hend, whose caddie is former Australian pro Tony Carolan.

“2005 at St Andrews was my one and only Open and I’m really excited to have a crack again.

“It’s the Home of Golf. Of course you’d like to be a Major Champion but if you could possibly win The Open at St Andrews, that’s just the cherry on the cake. It’s the best accomplishment for all professional golfers.”

Unlike Fraser and Hend, the in-form Lahiri, who claimed the Venetian Macau Open in October, has never played the Old Course at St Andrews and is relishing the opportunity provided by the Open Qualifying Series.

“As a kid, I didn’t watch too much golf but I always watched The Open at St Andrews,” said Lahiri, who is currently second on the Asian Tour Order of Merit. “You see all of the things on television that you dream of experiencing for yourself, like the Swilcan Bridge and the Road Hole Bunker. You hear all the stories and legends, but to be there in person will be something very special.”

Moore, who was playing on a sponsor’s invitation at the Thailand Golf Championship, has experience of St Andrews having played in the Alfred Dunhill Links Championship in 2007.

“I didn’t even think I’d have a chance to try and qualify for The Open next year and now that I’m going, it’s incredible,” said Moore, whose wife Claire, who caddied for him in Thailand, is pregnant with the couple’s first child.

“My wife is due May 22nd, so there’s plenty of time to have the baby and come over to The Open.”