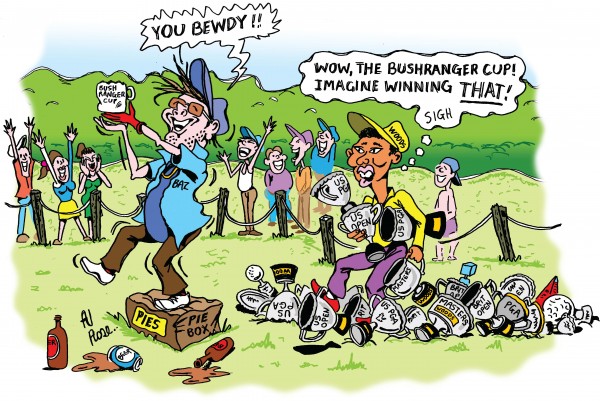 We are all familiar with the unwritten laws of golf. The third shot off the tee is usually a good one; long putts are easier to hole when they are for triple bogey; and golf balls always go further when you’re trying to lay up short of the water hazard.

Obviously, some are more steadfast than others are, but in the lead-up to a recent golf trip I learned of another one: The anticipation of an upcoming golf trip is directly proportional to the fear of playing poorly on it.

The anticipation can vary in different ways.

If we’re talking about a golf trip that has had at least six months of planning (primarily to give each golfer plenty of time to etch the event into the family calendar) then the anticipation will be palpable. Sleep will be lost on the night before the trip; the heart racing at a pace that only US Masters contenders can possibly relate to.

And what about the idea of holding bragging rights over your golfing mates for a full year? On the back of the revelations about peptide abuse in the professional sporting world, The Golf Trip Champion is now one of the most respected titles in world sport, and your mates will be bringing over the expensive imported beer at your next BBQ.

The anticipation of playing one of Australia’s best golf courses can also be huge. The thought of lush fairways, slick greens and using green-coloured sand to fill in your divots is enough to get any golfer excited. It’s hardly the environment you want bring your ‘D’ game.

I was fortunate enough to play Royal Adelaide for the first time recently. I’d watched Greg Norman and Nick Faldo walk those fairways as a kid but it’s probably an understatement to say they didn’t walk the course that I saw. My golf was a disaster. I hadn’t played that badly in years and while there was still some enjoyment in playing the highly-regarded golf course, I played a game that Sir Nick and The Shark wouldn’t have recognised.

More recently, I went on a golf trip to Barnbougle Dunes; an adventure that included a combination of every one of these aspects of anticipation.

The golf trip had been in planning for over six months–during which time the sledging had increased to a level that would have made Andrew Symonds proud–and we were about to spend three days walking the fairways of Barnbougle Dunes and Lost Farm; both rated in Australia’s top-10 best golf courses.

We arrived running on less than four hours’ sleep, primarily due to a fear of playing a version of golf resembling croquet for three days. We had caught a plane to be here and there was no place to hide on the northern Tasmanian coastline.

I’m pleased to say my golf wasn’t a complete disaster. I didn’t come home donning a nauseating dinner jacket or carrying a miniature trophy through the airport, but I did manage to play a few shots I can tell the kids about at bedtime.

Surely the whole experience must be a lot like making the cut at your first major golf tournament? Guys like Tiger Woods and Adam Scott have made it well-known that their whole year revolves around performing well at the majors, and the let-down when they don’t must be heart breaking.

Still, if they’re lucky, the best professionals can play a major golf tournament four times a year. The average amateur golfer is lucky to get the “all clear” to play golf on consecutive days perhaps once or twice a year–and not only is the fear of playing bad golf much greater, but also much more likely.

Michael Green is an avid golf fanatic, and the author/blogger of the Aussie Golfer Blog, one of Australia’s most popular golf blogging sites. Follow him on Twitter (twitter.com/AussieGolfer) or on Facebook: www.facebook.com/AussieGolfer