Playing golf with a reputation

By Michael Green on September 6, 2014 Comments Off on Playing golf with a reputation 19th hole, golf fun, golf jokes 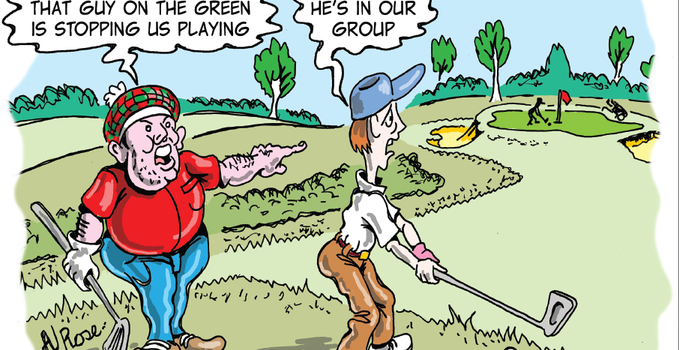 It had been some time since I’d played golf with someone with a reputation. But in this particular case, I wasn’t sure what the golfer’s reputation was. On a recent wintery, mid-week afternoon, things had fallen into place to allow me the opportunity to sneak out for 18 holes. It’s rare the planets align for […]

By Michael Green on September 5, 2014 Comments Off on 10,000 hours of golf, The Dan Plan in Australia Dan McLaughlin, dan plan, practice

It was no surprise to hear that my playing partner for the day had arrived at the course early and was spending his time practicing. For my playing partner was none other than Dan McLaughlin, and Dan has a plan to spend 10,000 hours on his golf game in an attempt to become one of […]

It’s not until I introduce some new golfers to the game that I remember how intimidating a golf club can be. The game of golf itself is difficult enough but it comes with a mind-bogglingly complicated rule book and a bizarre set of extra quirks that very few of us dare to question, if we […]

World-renowned golf instructor Shawn Clement recently visited Australia for the first time and presented his unique perspective on the golf swing to keen golfers at Bonnie Doon Golf Club. Clement is no ordinary golf instructor. The 46-year-old Canadian has been involved with golf for over 36 years; 26 of those have been instructing golfers on […]

Golf in the City an ace for Sydney

By Michael Green on March 15, 2014 No Comment sydney golf

A brand-new indoor golf centre has opened in the heart of Sydney’s CBD aiming to attract business men and women who want to work on their golf swing between meetings and business calls. Golf in the City opened late last year with great success, attracting golfers who don’t normally have the time to get out […]

Nine golf shots that will give you the shakes

By Michael Green on May 31, 2013 No Comment golf fun, michael green

I pity the world’s best golfers. The greatest fear they have on the golf course is missing the cut or if they’re lucky, tightening up as they get in contention on Sunday. To them, the life of a hacker must look like an extreme sport with enough fear-inducing shots during a round of golf to […]

We are all familiar with the unwritten laws of golf. The third shot off the tee is usually a good one; long putts are easier to hole when they are for triple bogey; and golf balls always go further when you’re trying to lay up short of the water hazard. Obviously, some are more steadfast […]