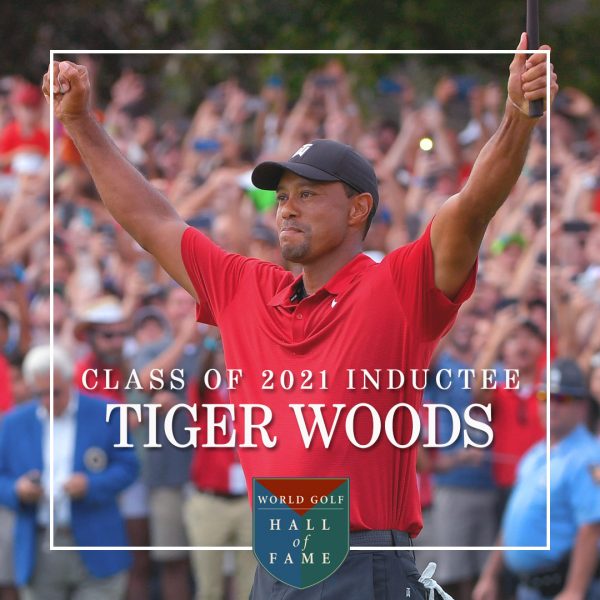 The World Golf Hall of Fame will enshrine 82-time PGA TOUR winner Tiger Woods as part of its Class of 2021. Woods received the news of his impending Induction in the Male Competitor category via phone today from PGA TOUR Commissioner and World Golf Foundation Board Chairman Jay Monahan.

“I am both honored and humbled to be inducted into the World Golf Hall of Fame,” said Woods. “This past year has been such an incredible journey and the support I’ve received from my family, friends and fans has been overwhelming. This achievement is the ultimate recognition to never give up and keep chasing.”

A winner of 93 worldwide events including a record-tying 82 on the PGA TOUR, Woods is a 15-time Major Champion and a three-time winner of the career Grand Slam. Woods completed the “Tiger Slam” in 2000-01 when he became the first golfer since Bobby Jones to hold all four major championship titles at the same time.

“Tiger has done more for the game of golf than anyone ever thought possible, and his historic feats on the course are only one aspect of his impact,” said Monahan. “His imprint on the game is immeasurable, and his unparalleled legacy is one we look forward to celebrating as he’s inducted into the World Golf Hall of Fame next year.”

A two-time champion of THE PLAYERS and the first two-time winner of the FedExCup, Woods has competed on eight Ryder Cup and nine Presidents Cup teams which includes when he served as a playing captain of the victorious U.S. Presidents Cup Team in 2019. He is an 11-time PGA TOUR Player of the Year winner and was awarded the Presidential Medal of Freedom in 2019 following his fifth career victory at the Masters.

“The World Golf Hall of Fame is honored to recognize the incredible career of Tiger Woods,” said Greg McLaughlin, CEO of the World Golf Foundation. “His impact on the game of golf and everyone associated with it will have a lasting effect on generations to come.”

The Class of 2021 is elected by the Hall of Fame’s Selection Committee, which discussed the merits of 10 finalists. The Selection Committee is a 20-member panel co-chaired by Hall of Fame Members Beth Daniel, Nick Price, Annika Sorenstam and Curtis Strange, and includes media representatives and leaders of the major golf organizations.

For more information on the Induction process, visit www.worldgolfhalloffame.org.