Jones, Pike and Kanaya qualify for The 149th Open 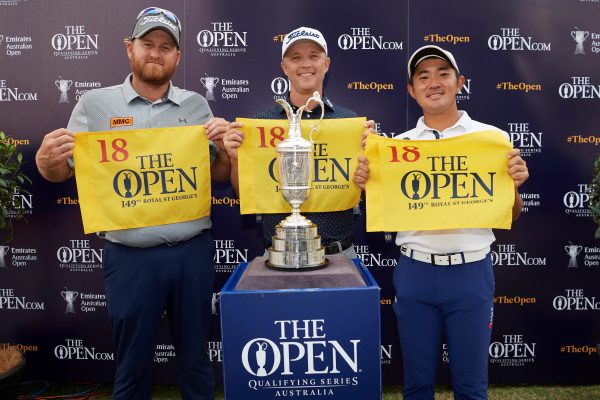 Matt Jones, Aaron Pike and World Number 1 amateur Takumi Kanaya have secured their places in The 149th Open after qualifying at the Emirates Australian Open.

The 104th playing of Australia’s national championship took place at The Australian Golf Club in Sydney and was the first event in The Open Qualifying Series which gives golfers around the world opportunities to book their place at Royal St George’s from 12-19 July 2020.

Playing his home course, Matt Jones recorded a one-shot victory on a 15-under-par total of 269 to secure his second Australian Open title after he also won at The Australian Golf Club in 2015.

The Australian took control of the top of the leaderboard during the second round with a blistering six-under-par 65, followed by a third round 3-under-par 68 to start the final round with a three-shot lead.

Jones was in control throughout the final round, never relinquishing his lead, with a two-under-par 69 enough to see his name engraved on the Stonehaven Cup as the 2019 champion.

This becomes the third time that Jones has earned a place in The Open via The Open Qualifying Series – he qualified for The 145th Open at Royal Troon after winning the 2015 Australian Open, qualifying again for The 147th Open at Carnoustie after finishing runner-up at the 2017 Australian Open. The Australian Golf Club being the qualification venue each time.

“It’s amazing, if there is one Major I would like to win it is this one,” Jones said. “Coming from Australia, waking up and watching Norman play, Peter Thomson is on there (the Claret Jug), it would be amazing to be on there too. The Open is the number one golf tournament in the world and I can’t wait to get there.”

A final round of five-under-par 66, highlighted by an eagle at the 18th hole, from South African Louis Oosthuizen saw the 2010 Champion Golfer of the Year finish runner-up with a 14-under-par total of 270.

With Oosthuizen already exempt for the 149th Open, Pike and Kanaya claimed the other qualifying spots for Royal St George’s after finishing tied for third on nine-under-par 275.

Following birdies on the 14th and 15th holes, Pike became acutely aware of the opportunity on offer. A further birdie on the par-4 17th hole saw him record a final round of 2-under-par 69. He will now make his debut in The Open when he joins the world’s best golfers at Royal St George’s in July.

‘I knew the spots were up for grabs and I knew going into the last day I was running top 10, so I had that idea in my head,” Pike said. “I birdied 17, I tried to birdie 18 to keep going, but it’s the biggest tournament in the world for me. It is. It’s as simple as that. It’s amazing to get in it.”

The final round proved a challenge for Kanaya, who found himself two-over par at the turn. Fighting back with a birdie at the par-3 11th it took until the 72nd hole of the championship and a six-foot birdie putt for the 21 year old to secure his place in The Open.

“I was seeing the leaderboard. I made a (birdie) putt, so I am joining The Open, I was so, so nervous,” Kanaya said. “I haven’t been to St George’s but I can’t wait for The Open next year.”
This will be the second Open appearance for Kanaya who made his debut at The 148th Open at Royal Portrush after winning the 2018 Asia-Pacific Amateur Championship.

The next event in The Open Qualifying Series will be the South African Open hosted by The City of Joburg at Randpark from 9-12 January 2020.