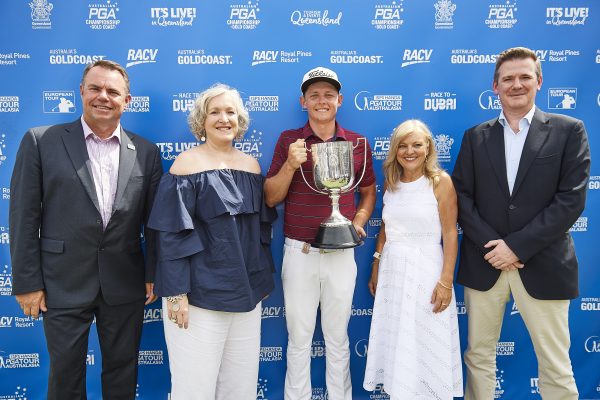 Tourism and Events Queensland (TEQ) and City of Gold Coast today announced their commitment to the PGA of Australia (PGA) to support the Australian PGA Championship for a further three years.

A day after the close of one of the most successful events to date, and where Queenslander Cameron Smith hoisted the Kirkwood Cup in a thrilling playoff over Jordan Zunic, the three organisations have celebrated the extension of their agreements.

This will tee off with the 2018 Australian PGA Championship which will be played from 29 November to 2 December 2018. The tournament is a flagship event on the ISPS HANDA PGA Tour of Australasia, and is co-sanctioned by the European Tour.

The Australian PGA Championship is a festival of golf and the tournament week also includes the MyGolf Kids Day presented by Cobra Puma and the Greg Norman Medal Dinner. Players and fans have also enjoyed the nerve wracking excitement of the Soniq Million Dollar Hole which is now synonymous with the event.

“TEQ has a proud history with this event and our successful partnership with the PGA of Australia has resulted in strong crowd numbers as well as new initiatives including the Soniq Million Dollar Hole and the Tournament Village,” she said.

“The Australian PGA Championship is an important part of the It’s Live! In Queensland events calendar and with the strength of the field growing each year, it has cemented itself as a premiere golf event.

“But more than that, the championship enhances the Gold Coast’s reputation as a world-class events destination and gives us a global platform to promote Queensland’s unique tourism offerings.”

Since the inaugural event on the Gold Coast in 2013, the tournament has found strong support in City of Gold Coast, and Acting Mayor Donna Gates.

“One of the biggest legacy outcomes for our city, post the 2018 Commonwealth Games, will be our drive to attract more world-class sporting events,’’ said Acting Mayor Gates.

“This announcement fits that bill perfectly with the Australian PGA Championship an absolute winner for the sport and our city. Well done to the PGA and Tourism and Events Queensland.’’

Gavin Kirkman, CEO of the PGA of Australia which oversees the ISPS HANDA PGA Tour of Australasia praised the strong, collaborative and positive relationship that the PGA has shared with TEQ and COGC over the last five years.

“The PGA has enjoyed a fantastic relationship with the teams at both TEQ and COGC.  TEQ has continued to show their commitment to the continued growth of the event, and have celebrated the successes of the tournament with us along the way. It’s wonderful to see that the Australian PGA Championship is an integral part of the It’s Live in Queensland events calendar.

“The City of Gold Coast is a key partner for the Australian PGA Championship and we are pleased to be working with them for another three years to ensure that this event continues to shine the world’s spotlight on the Gold Coast as a home of world class international sporting events. We are thrilled that the residents of the Gold Coast will continue to have the opportunity to see international golfing superstars in action for the next three years.”

Ben Cowen, Director of International Policy, European Tour, added: “We are delighted to be returning to Queensland for a further three years and with the support of TEQ and City of Gold Coast, we believe this tournament will continue its long and proud history as one of Australia’s premier sporting events.

“Our relationship with the ISPS HANDA PGA Tour of Australasia continues to go from strength to strength each year, and this tournament offers vital playing opportunities for our European Tour members in a superb setting. We had a fantastic winner last week in Cameron Smith, and we can’t wait to see more of the world’s best golfers out here on the Gold Coast.”