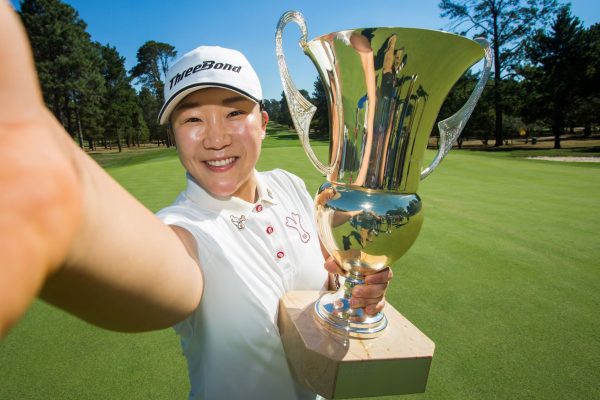 With just 50 days to go until the start of the 2019 ActewAGL Canberra Classic, ALPG is delighted to announce that Jiyai Shin has elected to defend the title she won so impressively at Royal Canberra Golf Club in 2018.

The win set Shin up for another incredibly successful season on the lucrative LPGA Tour of Japan, where the former world number one racked up 17 top-ten finishes including four wins and three second place finishes.

ALPG CEO Karen Lunn was delighted to announce the news of Shin’s defence.

“Jiyai is truly one of the greatest women golfers of all time and we are really honoured that she has chosen to defend her title this year. Apart from her incredible record on the course, Jiyai is one of the most humble and generous people you could meet, highlighted by her donating her prizemoney from last years’ event to the ALPG Next Generation Rookie Programme”

“It has been well documented that Jiyai has in recent years developed an affinity with Australia and has asked us to pass on the following message to her fans and friends here.”

“The event in Canberra is very important for me and I can’t wait to get back to see my friends and fans who I have come to know over the past years. I have won three tournaments in Australia, (2013 ISPS Handa Women’s Australian Open, 2016 RACV Ladies Masters and 2018 ActewAGL Canberra Classic) but have never successfully defended a title here. I have fantastic memories at Royal Canberra which I hope will inspire me to another victory in 2019”

ALPG is also delighted to announce that in addition to title sponsor ActewAGL and host venue Royal Canberra Golf Club, all of the tournament sponsors from 2018 have renewed their agreements to be involved once again in 2019.

In addition, in 2019 we will also have on board the University of Canberra as our official Education Partner and Schweppes as our beverage supplier.”

“I would very sincerely like to thank all of our event partners for the support they have shown us, to have all of these great brands associated with the ActewAGL Canberra Classic is a real boost for the tournament and also for women’s golf in Australia.”

“The fact that our loyal partners have jumped back on board for 2019 is a testament not only to the success of the tournament in 2018, but the quality of Royal Canberra as a tournament venue and the city of Canberra as a sporting destination.

“We are very fortunate to have a quality venue such as Royal Canberra as our host for the tournament. It is one of Australia’s finest courses in terms of the quality of the layout, and certainly one of our best in terms of hospitality and the setting it offers for an event of this stature.

“ALPG were delighted to be able to bring this event back to Canberra in 2018 and we hope that we will be here long into the future. The people of Canberra really love their sport and we hope that once again they will turn up in large numbers to watch some of the world’s best golfers in March 2019.”

The tournament in 2019 will once again be co-sanctioned by the ALPG and the Ladies European Tour, a field of 144 players will tee it up over 54 holes from 1st -3rd March competing for $150,000 prizemoney on offer.

Aside from the professional event, there will also be a number of other events and activities during the tournament week including junior and all-abilities events.

For any other information please contact Tournament Director Lee Harrington for further details at leeh@alpg.com.au