My phone has been ringing a little more than it usually does at this time of the year, with a lot of people seemingly keen to get an opinion on what had transpired on the back nine during the final round of the ANA inspiration, the first LPGA major of the 2017 season.

For those of you who were not watching, or did not witness the massive backlash in the media, South Korean world number three So Yeon Ryu won her second major championship in a play-off from American Lexi Thompson in highly controversial circumstances.

It appeared that, with six holes of the Championship remaining, 22-year-old Lexi Thompson was heading towards her second ANA Inspiration title and another major championship. The superstar American had teed off from the 12th tee with a three-shot lead, but had just given the chasing pack a glimpse of hope when she 3-putted from the fringe after pulling off an amazing recovery shot through the trees onto the edge of the putting surface.

While disappointed at the dropped shot, Thompson still looked composed and in control as she walked off the green; that was only her second bogey of the championship and she knew she was playing some of the best golf of her career. The way she was playing she was going to prove very hard to catch.

However, while the final group of Lexi and Norwegian Suzann Pettersen had been playing the 9th hole, someone (who apparently has very little going on in their life) had sent an email to the LPGA tournament office, stating that Lexi had not replaced her ball in the correct position after marking it on the 17th green during Saturday’s third round.
Two senior LPGA rules officials quickly rushed to the TV compound to study the video, and as millions watched on it was confirmed to TV viewers as Lexi was putting out on the 12th that she would be subject to a 4-shot penalty; a two shots for playing the ball from an incorrect position during the third round (rule 20-7c) ; and also a further two shots for signing an incorrect scorecard after the third round (rule 6-6d)
The only good news for Lexi was that before a 2016 rules change, she would have been disqualified for signing an incorrect scorecard!

As Lexi walked off the 12th green and headed to the 13th tee, she was stopped in her tracks by Sue Witters, the LPGA Vice President for rules and competitions, who notified Lexi that she had played from an incorrect position on the 17th hole on Saturday, and as a result she would be penalized four strokes. Obviously Lexi was shattered by this news and, not surprisingly, in tears as she realised what had just occurred and what it meant at that point to her chances of winning the tournament.

I have known Sue Witters for many years, and she is one of the fairest and most respected officials on tour. After the round she was clearly upset as she explained what had happened to waiting journalists. She said the ball was misplaced by “maybe an inch.” and added: “I’m 100 percent certain it was not intentional. Lexi is a classy lady.”

Asked if she was aware that the overwhelming reaction on social media was negative, Witters said: “Sure, but what was my choice? I ignore a violation of the rule then I get criticized for that. It made me sick but I had to do it.”

While on face value it may have seemed harsh, the decision made by the LPGA was 100% the correct one. The LPGA and other professional tours do not make the rules, their job is to enforce them and once they were notified of the breach they had no choice but to enforce the rules and apply the penalty.

“When you have a situation like this, it’s extremely difficult,” she said. “This is the last thing that the rules team want to do. But their job is to enforce the rules of the game, regardless of who the player is and what the situation is and what the championship is.”

Lexi’s ability to regain her composure through the tears and birdie the very next hole after being informed of the penalty is one of the most remarkable bounce-backs I’ve witnessed in golf. She was absolutely devastated as you would expect, and her ability to somehow put it behind her shows what a tough cookie she is.

“I just tried to gather myself to hit that drive,” she said after the round about her emotions on No. 13 tee. “I learned a lot about myself today and what I have in me. I’m proud of the way I played coming in.”

The enthusiastic galleries at Mission Hills Country Club rallied around Lexi when word of the penalty spread, as she walked past the grandstand to the 18th green brushing away tears they were chanting her name loudly. The Floridian is the only American ranked in the top 10 (number 4) on the Rolex Women’s World Rankings, and the partisan fans were not about to let her go down without a fight!

“The fans were amazing,” Lexi said after So Yeon Ryu had birdied the first playoff hole for the victory. “They got me through the whole round.”

The ANA championship was the second major win for So Yeon, who had won the U.S. Women’s Open back in 2011, and it was unfortunate that her second major championship victory was blighted by what had transpired on the back nine on Sunday. The popular Korean was clearly shocked and saddened by the events of the past two hours.

The stain that will hang over this tournament is that for the third time in less than a year, one of golf’s major championships was marred by a rules situation that could have been avoided. This time, Lexi was the victim, and there is little doubt that it cost her a second title at the ANA, for moving her ball less than an inch.

There is no doubt that Lexi should have been more careful in replacing her ball after she had marked it. While I am confident that there was no intent on her behalf to improve the position of her ball on the green, the fact remains if Lexi had replaced her ball and played it from the correct position none of this would have happened.
In her defence, Lexi was not marking the ball from the same angle she would normally do, as she was trying to avoid stepping on her playing partner’s line. It also looks on the video that she was attempting to line up the line she has marked on her ball to the hole which is not easy to do from the side.

At last year’s U.S. Open, Dustin Johnson was told on No. 12 tee that he might be penalized for causing his ball to move on No. 5 green. He was assessed two strokes although he was not told until his round was over,  but bailed out the U.S. Golf Association by winning anyway.

The U.S. Women’s Open a few weeks later went to a three-hole playoff between Brittany Lang and Anna Nordqvist, and Nordqvist was given a two-stroke penalty for inadvertently touching the sand with her club in a bunker. That violation was also determined on TV and Nordqvist lost by two strokes.

This latest episode was yet another embarrassment for the game of golf.

“Seriously people! We have policed ourselves for 200+ years! No need for call ins! @USGA needs to stop this.” 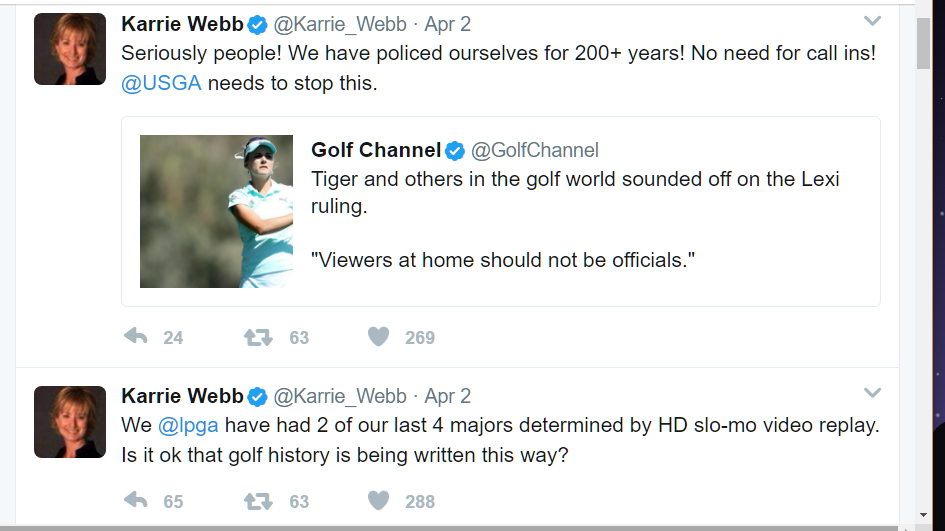 It does seem wrong that someone not at the golf course or involved in any way in the tournament itself is able to e-mail or phone in and threaten a player’s ability to win a golf tournament or at least to alter that player’s score. Golf seems to be the only sport that believes someone sitting in their living room or at a bar should have a say in the outcome of the tournament.
If the person who emailed in was a real golf fan they would have known that there would be serious consequences for Lexi, for the life of me I do not know what kind of person would want to do such a thing.

The USGA and the R&A, the governing bodies of the game, have come out recently with plans to modernize the Rules of Golf which is fantastic news for our game.
There is no doubt that the rules relating to this incident need to be reviewed. As the rules stand currently a player can be penalised retrospectively after any round apart from the final round, as once the tournament is complete and the results are published then the outcome or scores cannot be changed.
If Lexi had made the same mistake on Sunday and someone contacted the LPGA on Monday, no action could have been taken.
I think most people close to the game agree that once a player’s scorecard has been signed and returned that score should be final, regardless what facts are brought to light after the round.

My understanding is that if the new rules of golf are adopted they will come into force from 2019, and the proposed new rule below should prevent these kind of incidents from happening in the future.
1.3a(2) “so long as the player does all that can be reasonably expected under the circumstances to make an accurate estimation or measurement, the player’s reasonable judgement will be accepted even if later shown to be wrong by other information” (such as video technology)

However, there are still 21 months we must get through until this happens!

Karen Lunn is the CEO of the APLG.