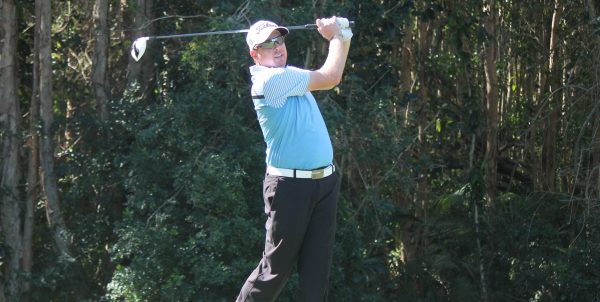 I only had a few days at home to sharpen the game with Benny before heading out to the Queensland Sunshine Tour’s Mining Towns events. Last year was my first trip to the mining towns but most of these Pro-Ams have been going for many years. The mining towns have a series, which comprises 10 rounds around 6 courses. There is a bonus for the top 3 accumulative scores at the end of the 10 rounds so consistency was going to be the key.

I flew into Emerald for the first event and my mate and travelling partner, Ed Stedman picked me up. I feel I got the best part of the deal as Ed left his house in the Hunter Valley of NSW at about 2am that morning and arrived at Emerald airport at 5.30pm to pick me up. The course was looking great and new club professional Matt the Professional did a great job in the organisation of the event. I played solid with the only blemish being a bogey on the 17th hole where I plugged the ball in a green-side bunker. I signed for 67, 5-under and won the event by 2.

After a couple of disappointing weeks in China and Korea it was nice to see some money coming back into my bank account instead of just out of it. I love what I do but at times when you see your bank account going the wrong way, you can sometimes think, what else could I be doing? I have to give a shout out to Harry Wills, a young fella who I played with and I must say, he is one of the nicest kids that I have played with, and can play!

Tieri was next and a mate of mine, Mat Line organised a house for Ed and I to stay in. He also organized passes into the mess halls where all the miners eat. The food in these places are all buffet style and there is pretty much whatever you what there. And they all have an ice cream machine! The course had improved a heap from last year and I was lucky enough to be paired with Ed. We had a good day but both struggled a little and I had to fight all the way but once again signed for a 5-under par 66, which at the end I was extremely happy with. Some days it comes easy and some days you have to fight.

There was a funny story that came out of the day. A couple of the boys were driving to Blackwater, which was our next event and one of them didn’t feel very good. They stopped in the middle of nowhere and while out of the car, one of them put his phone on the roof of the car. Well, they forgot about it until they arrived in Blackwater 50 minutes later. So they turn back around and drive out to roughly where they stopped and tried ringing the phone. In the middle of the road face down, they see a dim light (it was on silent). His phone had been sitting in the middle of the road for 2 hours and no one had run over it!

As I said, Blackwater was our next stop and once again the course was looking awesome. The event is basically run by one person, Lynlea. She does an amazing job, from finding the sponsorship money to accommodation. And the course was amazing. They were some of the best greens I have ever putted on. I started a little slow shooting 2-under in the first round but came home with a 5-under 67, to tie for the win. It was another great result as it kept me out in front for the circuit prize.

I had a fellow professional tell me a cool story. He said, “Jeffro, you may not remember but you were the first golf professional I ever played with when I was a young junior. I played with you in the Maryborough, Pro Am and you shot 64. You did it so easy, I’ll never forget it. You signed your ball and gave it to me at the end. That ball sat on my bedside table for about 3 years.”

Now when I first heard this story I didn’t know whether I felt old or honoured. But it’s really nice that I may have had some impact on this young man’s life moving into professional golf. I won’t mention his name but I can tell you he hits it a country mile and can play.

We headed to Moranbah next, where Ed and I stay with some friends, Noel and Lyn Busk. And do we get looked after! (Lyn, that is still one of the best baked dinners I’ve ever had). Anyway the accommodation must have helped as I opened with 8-under-par 64 to lead by a two shots. Unfortunately the second day wasn’t as good and 1-under was all I could mange to finish tied 2nd. Not a bad result but a little disappointing as I had the event in the palm of my hand. And I also let a couple of the guys just get a little closer to me in the circuit prize.

Middlemount was next and once again the mining town series didn’t let us down as Ed and I had a great 2-bedroom villa for the three days. Day 1 was the corporate day and they always turn on a great day. We saw the drink cart 3 times on the first hole. The miners get thirsty out there! I was a little flat at this event and could only mange 71 and 68 for a 5-under par total and about 7 behind the winner. To be honest I holed nothing over the two days but hey, it happens. Brett Rankin played great and climbed ahead of me in the circuit prize so with two rounds to go I had to lift my act.

The final event was at Dysart, a Pro-Am that I have won before so I had positive feelings heading back. It’s a great little course and is always in great condition. As in Middlemount I started a little slow, shooting 1-under on day 1 and sitting 6 behind. This also put me too far back to win the circuit prize but a good round and I could grab second. I played with Ed again the last day and shoot a solid 4-under, which boosted me into 4th position in the Pro-Am, and I finished 2nd in the series, which I was happy with. Brett, who won, played awesome golf to finish at 45 under-par and I finished at 37 under.

I love coming out to these places as it reminds you of what being a member at a golf course is all about. The whole club and community get behind the events so they always have an amazing feel. Most of the courses that we played don’t even have green keepers, it’s all voluntary. And some of them are as good as anywhere.

I fly back into Brisbane and only have about 10 hours at home before flying to the land of Stevie Wonder pins, Korea. I then head straight to Japan so I’m looking forward to taking my mining town form onto the bigger stage.