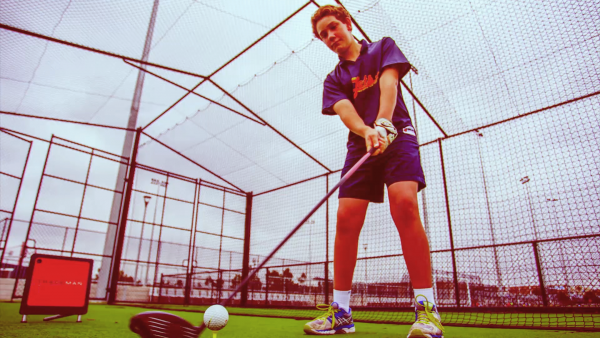 MELBOURNE’S Medway Golf Club is experiencing a spike in its junior ranks and it’s more by design than accident.

In the past year, the club has become a magnet for junior golfers keen on developing their golfing skills and it’s largely due to its close relationship with nearby Maribyrnong Sports Academy (MSA).

“That’s probably due to the fact that we have a strong group of juniors who play here regularly,” said the club’s general manager Brett Scothern.

“Kids want to play and interact with other kids and that’s why more are joining our club.

Of course, a junior program will only succeed if it has the support of the club’s board and its members.

Scothern was quick to point out the members and the board fully supported the junior program.

“In fact, many of the juniors play in regular weekend competitions,” he said.

“They represent the club in junior pennant and Golf Victoria pennant.

“This year we have two junior pennant teams in the under-18 pennant and hopefully an entire team of junior girls.

“We also offer a cadet program for 8-11-year olds as a feeder into club membership and promote Maribyrnong Sports Academy as a pathway for high school students to continue their golf.”
Junior golf clinics are also offered at Medway Golf Club during the school holidays.

Meanwhile, the Maribyrnong Sports Academy students spend one afternoon a week practising at Medway Golf Club under the watchful eyes of the academy’s expert coaches and a further two 90-minute sessions at Riverside Driving Range.

The college’s sport psychologists and dieticians also play a major role in their development.

In addition to a year’s 7-12 academic program students are involved in a Technical Golf Program (six hours week) and a comprehensive Athlete Development Program (ADP).

“The agreement between the school and the golf club has been hugely valuable,” he said.

“We have a great relationship with the golf club, which has a great golf course close to the school.”

For the record, the MSA is modelled on the college system in America.

“The students have to keep a minimum academic standard up to be in the program, but they do get support if it’s dropping because of their sport,” McAllion said.

Still, the students’ effort and behaviour is non-negotiable.

“That needs to be at a high level throughout their time at Maribyrnong.

“The students train before or after school, not during school time.

“During school time they do an athlete development subject, which includes strength and conditioning and working with our consultants (sports psychologists, dieticians and other mentors).

Each student’s progress is monitored closely.

Reporting, testing and technical information is placed online allowing coaches (home, state and national) access to view and include data or lesson overviews.

“The aim is to provide excellent structured training and provide students’ coaches the cutting edge information to help develop the athletes,” McAllion said.

“We have five Olympians on staff and other sports men and women who have played at the highest level.

“They are well-credentialed and mentor the students every day.”

“We have seen a significant improvement in all the kids that put the time in,” McAllion added.

In fact, Medway arguably has one of highest number of juniors representing the club in major junior tournaments.

In the recent Boys and Girls Championships of Victoria, 13 players represented the club including eight on single figure handicaps.

Lauren Goddard was a member of the School Sport Victoria team that competed at the School Sport Australia National Championship recently and young Harrison Gomez was selected in Victoria’s under-12 team.

And former student Stephanie Bunque represented Victoria and Australia at the US women’s amateur championship in August.