Eccentric Moe Norman one of the best

LONG John Daly is arguably the most colourful golfer playing the game today, but when it comes to eccentricity he’s a rank amateur compared to the late Murray Irwin “Moe” Norman.

Norman was an eccentric Canadian golfer, who, like Daly, wore mismatched outfits and played fast – sometimes never stopping to line up putts.

Australian golf fans would have loved Moe because he wasn’t off the American college production line and he loved a bet.

But he was renowned as one of the genuine characters of the game rather than a tournament winner.

He didn’t set out to win tournaments, preferring to play for enjoyment in an unconventional manner. 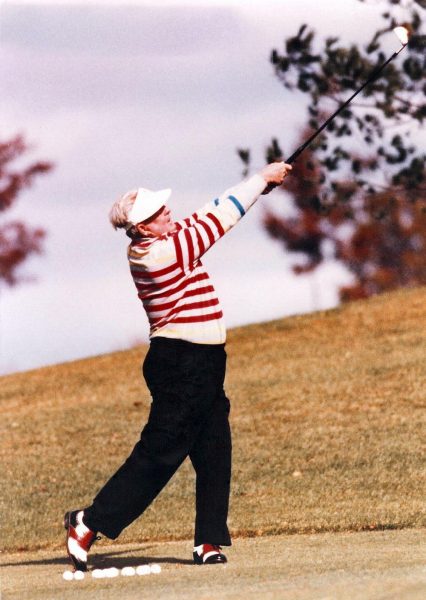 During his amateur days in Canada he came under fire from golfing authorities for picking the prize he wanted and then producing the score.

If the fifth prize took his fancy, he would leave others to fight it out for first place.

In one event, Norman had hit his approach shot to the final green and needed to get down from there in three to win.

To him this was boring, so he putted into the bunker and proceeded to get down from there in two strokes.

In another event a television set was first prize and Norman, so confident of winning, sold it to the highest bidder before he teed off.

He was always in trouble with the golfing hierarchy.

Once during the Canadian amateur matchplay final he got upset at his opponent’s slow play so he took off his shoes and socks and waded in the river to look for golf balls.

An unusually shy man, Norman often went missing during the presentation of trophies – especially if he won and had to make a speech.

He was far happier playing other golfers for money in Canada and along the golf resort strip in the US where he would often rather sleep in his car than a hotel.

In tournaments he would make side bets with spectators on the results of certain shots.

On one occasion, in the Los Angeles Open, he teed off with a Coca Cola bottle and hit the ball straight down the middle.

He was amazingly accurate and that’s why they called him Pipeline Moe.

“Mine is straight down the middle,” he would often say.

“I’m still waiting for a tournament at midnight,” he once joked, implying that he would be the only player to find his ball in the dark.

Considered one of the best shot-makers to play the game, Norman held more than 30 course records in Canada and the US.

He contested two US Masters as an amateur and is one of the few players to drop out of the event when in contention.

After receiving a tip from Byron Nelson he went out and hit hundreds of golf balls to try and master the shot and woke up the next day too stiff to swing a club.

Lee Trevino said Norman was a genius when he had a golf club in his hands.

He had an unorthodox short backswing and short follow-through – his signature swing breaking all the rules of conventional golf mechanics.

He never had a lesson in his life.

Asked why he had never taken a lesson from other pros, he says “because I haven’t found the guy who can beat me”.

Many of his peers believe he was the greatest ball-striker in the history of the game, but he only ever achieved a small fraction of what he deserved.

When he joined the US PGA Tour in 1959 it seemed he would clean up, but he was openly rejected by many fellow pros.

He quit the tour after two years, never to return. 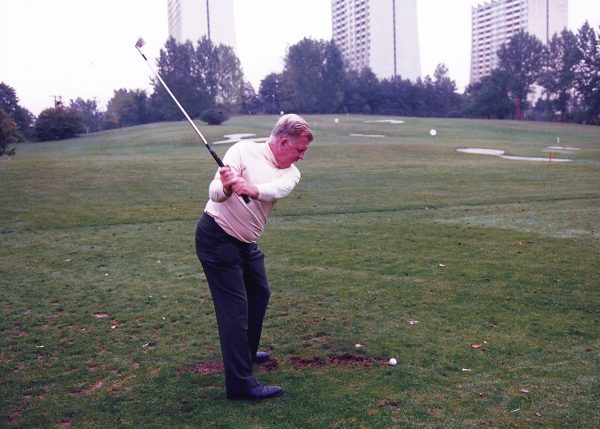 Norman’s inferiority complex meant that when he saw a big-name player on the tee he would often fall apart. A fourth place at the 1959 Greater New Orleans Open was his best finish.

In 1992, Jack Kuykendell developed what he considered to be the ideal golf swing by replicating Norman’s technique.

Inducted into the Canadian Hall of Fame in 1995, Norman won 13 Canadian Tour titles, represented Canada in the World Cup and won the Canadian Senior PGA seven times. He shot 59 three times and had 17 holes-in-one.

One of Norman’s eccentricities was wearing five wrist watches ensuring that he always had the correct time.

In 1995, a leading golf ball company provided him with 500 dozen golf balls a year, but that didn’t stop him searching for golf balls in the out-of-bounds area off the first tee at Royal Oaks Golf Club in Florida.

He would use the balls he found and sell the new ones.

The golf swing of legend Moe Norman is regarded as the simplest, most efficient and accurate in the game today.

Now golfers on the Gold Coast have an opportunity to learn Norman’s Single Plane Swing at a transformative golf school experience that has helped thousands of worldwide golfers to play better, hit the ball longer and more accurately.

Founded in 2000 in the U.S., Graves Golf Academy (GGA) schools have developed a fanatical following among golfers who have learned the unique Single Plane Swing and rediscovered that golf can be fun again and easier on their bodies.

At a GGA three-day school at the Palmer Colonial Golf Course in Robina, Queensland, you’ll learn the correct movements and feelings of the Single Plane Swing, and take advantage of proprietary GGA training devices that make it easy to master the Single Plane Swing and keep improving on your own.

GGA schools were founded by Todd Graves who met Norman in 1994 and spent 10 years learning the swing from his friend and mentor. Using 3-D-motion-capture research, Graves discovered that the Single Plane Swing is biomechanically easier on the body and simpler to repeat than the conventional swing.

GGA instructors teach the Single Plane Swing, but the needs of individual golfers are the primary focus of every school.

Upcoming school dates are Oct 21-23 and Oct 28-30. They are also offering other school programs at various dates each month