Aussie veterans ‘Soldier On’ in Scotland 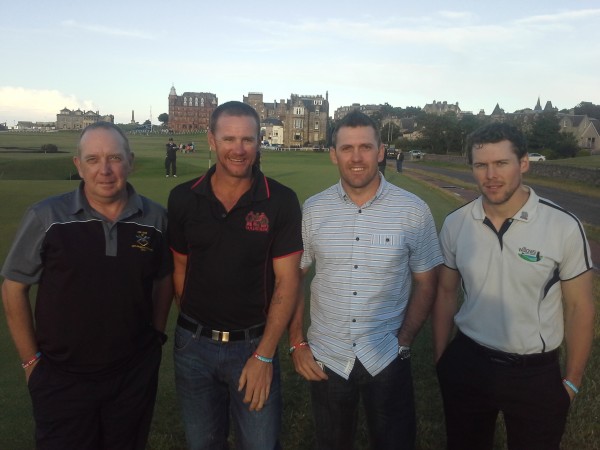 An Australian group of wounded war veterans are proving that golf can be their means for positive reintegration into the community. With the help of national charity Soldier On, a small band of Aussie veterans made the pilgrimage to the home of golf, St Andrews, in Scotland for a global veterans charity event in July to play alongside wounded soldiers from the UK, USA and Canada.

The St Andrews Legacy trip had both a profound and enlightening impact on some of them. Aaron McKinnon is a former leading Seaman and Boatswain’s Mate who spent 12 years serving the Australian Navy in South East Asia and Iraq. He was injured in 2006, discharged in 2010 and now coaches golf in Cairns.

“The feeling here in unbelievable, almost uncanny,” McKinnon said during his visit to St Andrews. “There’s an eerie feeling of peacefulness that really does clear your mind. To have this opportunity and experience, to play golf in Scotland, is the biggest part of my rehabilitation.”

A close friend of McKinnon’s told him about Soldier On and it prompted him to apply for the St Andrews Legacy trip. “I had so many emotions when I found out I was going, it was almost like I was standing beside myself. I have a passion for golf. It’s been keeping me together.”

Aaron joined fellow Aussies Sam Bush, Nick O’Brien and Matt Searle on the golfing adventure-of-a-lifetime and met up with a group of Canadians – Norm Proulx, Bruno Turcotte, Will Parkes and Vincent Mancini. First stop on the St Andrews Legacy trip was the Crail Golfing Society’s Balcomie Links but the journey also included a visit to Kingsbarns Golf Links and finally The Royal and Ancient Golf Club of St Andrews.

“I’ve seen certain people change in front of my eyes in a couple of days,” veteran Sam Bush said referring to the affirmative impact of the Scottish adventure. “Golf has more meaning now than it did before and if I can help someone else to be in the position I am, I’d love to do that,” said Bush, who served in countries including Afghanistan, Iraq, East Timor and Singapore.

Thirty-three-year-old Bush is an accomplished golfer, boasting a sound handicap of five and a vast appreciation for the intricacies of Scottish links golf. “I love the differences. There was the history at Crail, the beauty of Kingsbarns; the Duke’s was very, very tough, though it was amazing. My 75 on the New (Course at St Andrews) was the most complete round of golf I’ve ever played and the Old (Course) was a dream. St Andrews is so different to anywhere else. The first day I could do it, I went down to the Old Course at five-am and experienced the calm.”

According to Soldier On, of an estimated 60,000 veterans of recent conflicts, as many as 6,000 are expected to suffer debilitating effects of operational stress injuries or post traumatic stress disorder. “Soldier On is using Golf as a means of rehabilitation for wounded veterans,” says Soldier On Victoria’s Adam Evans. “We are establishing community golfing days as a means of building community, growing the sport and ensuring we have the best generation of reintegrated veterans we have known.”

The charity insists community networks built through events like the St Andrews Legacy trip can often mean the difference between life and death. “Suffering the debilitating effects of PTSD, some of these guys are lucky to be alive. The sad fact is that we are losing more veterans to suicide than to combat action,” Evans said. Soldier On also empowers veterans to re-enter meaningful employment and aims to inspire the wounded to realise their potential.

“Our golfing strategy does this on many levels,” Evans said. “At the community level, we are able to provide safe and supportive networks to keep our veterans engaged. We build on those networks in local partnerships to provide access to employment and mentoring opportunities in the golf profession and in the various business networks that it opens for our participants.”

Soldier On is currently seeking support from golf clubs and associations around Australia to provide more assistance in the reintegration of veterans. It conducts monthly business golf days in Sydney and is establishing extra events in Adelaide.