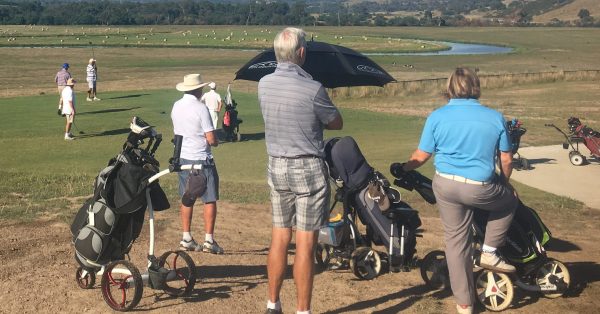 Anyone who has played golf with me knows that I’m a fan of playing quickly. My regular foursome, when unencumbered by slow groups ahead of us, can easily finish our round in roughly three hours and 45 minutes.  A quick round is a fun round.

So you’ll understand my frustration when, last month, I walked off the 18th hole following a round which had taken a staggering five and a quarter hours. Mind you, this was not a corporate golf day or pro-am (which as we know can often take all day).  No, this was a simple Wednesday round at a local club. And we were in an early group; the poor souls who drew the later tee times had it even worse as the delays were amplified throughout the day.

To clarify a bit, it was a stroke round (sigh), for the Mid-week Monthly Medal. As we all know, stroke is the slowest of golf’s many formats to play. And, being the Monthly Medal, the club had deemed it necessary to pull out all the stops in an attempt to crush the living soul out of every competitor: lightning-fast greens, crazy pin positions, blue markers pushed back, etc. To top it off, some fairly strong winds blew through the course, making life even more difficult.

To say that the day ‘wasn’t fun’ would be a gross understatement. It contributed to one of my worst rounds of golf in ages. From both a scoring perspective, and from an “enjoyment” perspective.

Now, before you dismiss this as sour grapes for a bad round, understand that I was far from alone in my opinion. Very few people enjoyed their golf on that very, very long day. (And keep in mind that I am—very slowly—getting to the point of all this.

One of the main culprits that severely contributed to the slow pace of play was the speed of the greens. From chips or pitches that slipped past the pin into back bunkers, or short putts that missed the cup and rolled…and rolled…and rolled well past the hole (sometimes off the green into a front bunker), many of the competitors of the day found themselves at wits’ end.

Indeed, there were many times during the round that I considered taking up lawn bowls.

Anyway (and now to the point) it came as no surprise to me that a recent research project by the USGA and the University of Minnesota has found a correlation between green speed, pace of play and overall round enjoyment.

The Science of the Green initiative— a five-year research partnership that focused on the long-term sustainability of the golf industry—concluded that faster greens led to not only a decrease in turf health, but, more importantly, slower rounds and an overall decrease in playing experience.

“Green speed was shown to be statistically significant in impacting pace of play,” the report states.

So for those of you out there who have long decried the super-slick greens that some maniacal committees/greenkeepers throw at us, the report will come as a bit of relief. Huzzah!

What many clubs continually forget is that we, as golfers, are there during our LEISURE time. For most of us, golf is meant as a LEISURE activity, where we can go out, get some exercise, enjoy some good company, relax and have a bit of a laugh while we challenge ourselves to hit a little white ball with a very crooked stick. By and large, we want delight. Not distress.

So to all the clubs and committees out there who still aim to trick up their courses and treat every week as if it were a US Open, keep in mind that it might be better to slow down (the greens) to speed up (play).  And it may even keep your members happier!

For more on the study, visit: http://scienceofthegreen.umn.edu.