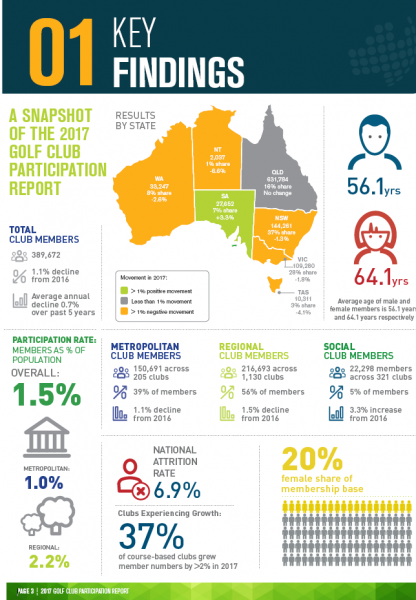 Sadly, the numbers show that golf in Australia is still on a downward trend.

National golf club membership saw a 1.1% decline versus 2016, with declines of greater than 1% in most districts around the country. Regional areas recorded an overall membership decline of 1.5%. Metropolitan areas fell by 1.1%. South Australia was the only state to record membership growth, with a 3.4% uptick. Overall, Australian golf saw a nett loss of 4,365 members, with a national attrition rate of 7%.

Golf competition rounds remain flat, but steady.  In 2017 10.3 million rounds were recorded, a slight increase on 2016 and an increase of 0.7% over five years. This suggests that, while fewer people are playing club golf, the ones who have stuck around are likely playing a bit more often.

Not surprisingly, Social Golf continues to rise, showing a 4.3% increase, and thus reaffirming the theory that the traditional membership model is falling out of favour. Social Golf now represents 5.7% of total club memberships.

The most worrying trend is that juniors and women are still under-represented in our sport. As a proportion of total members, juniors represent just 3.5% of total members. Reported junior members (under the age of 18) totalled 13,524 in 2017, representing a decline of 2.0% over 2016. A larger decline in percentage terms was evident for junior females (-2.5%) than junior males (-1.9%).

And overall, women still only make up about 20% of the total golfing population.

Every month in these pages, I implore club boards, GMs and the sport’s governing bodies to pull their heads out of the sand, and wake up and smell the coffee. As a collective group, golf is suffering from mis-management and misdirection at most levels, as well as the lack of real-world, modern, innovative solutions.  Excuses are rife. Solutions scarce.

So, what can be done? I’ve thrown plenty of ideas out there each month. But now it’s time for you, our loyal (and innovative) readers to come up with some real-world ideas to help save this great game in Australia. Don’t be shy. Golf has given us all so much, now it’s time to give back!

Drop me a line at ed@insidegolf.com.au with your ideas. Doesn’t matter how big, small, silly or wacky. I want to hear them all! Together we can make a difference…before it’s too late.