Tiger and team to decide if he plays at Presidents Cup 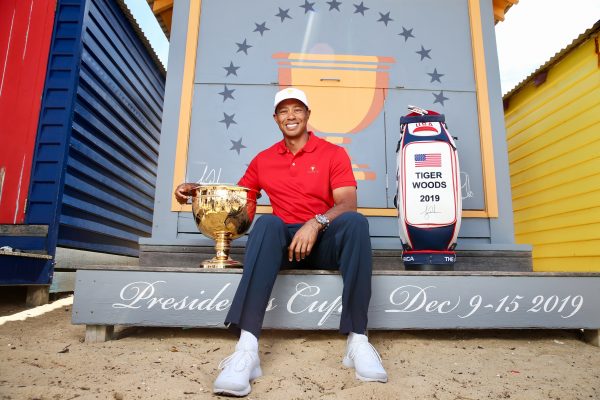 Tiger Woods says he will consult his assistants and players before any decision on whether he picks himself as a player for December’s Presidents Cup in Melbourne.

Despite his fairy tale comeback win in The Masters in April, Woods fell out of the top eight spots that would have earnt him automatic selection onto the U.S. Team for the event at The Royal Melbourne Golf Club this December.

The top eight qualifiers on both the U.S. and International teams are now locked in with the world’s best golfers headed to Melbourne for the 2019 Presidents Cup.

Woods, the U.S. Team captain will lead a stellar group headed by world No.1 Brooks Koepka with a team all inside the top 20 in the Official World Golf Ranking and a combined 11 PGA TOUR victories this season.

Meanwhile, Ernie Els will lead the International Team seeking to win the Presidents Cup for just the second time, led by Australians Marc Leishman and Adam Scott along with Cameron Smith, who will make his Presidents Cup debut and experienced South African Louis Oosthuizen.

However, each team has four captains picks still in their pocket, so the door is open for woods to return to Royal Melbourne for the third time as a player in the Presidents Cup and his first as playing captain. The only previous playing captain in Presidents Cup history was Hale Irwin in the inaugural event in 1994.

“That’s what I’m trying to do. We’ll be going through the whole process of having open communication with our top eight guys and my vice captains.”

“That is something that we will certainly talk about, whether I should play or not play. Ultimately, it’s going to be my call whether I do play or not as the captain. But I want to have all of their opinions before that decision is made.”

The 43-year-old’s season ended this week at the BMW Championship after he fell outside the top 30 players who qualified for the TOUR Championship, the tournament he famously won a year ago at East Lake Golf Club.

After winning the Masters in spectacular fashion in April, his 81st TOUR win and 15th major championship, Woods only played six more events this season.

Despite the lack of play, he has told his team that he expects himself, and everyone else, to stay sharp in the lead up.

“We talked about how important it is to be committed to the team and to the event and to each other, and that means playing and being prepared,” Woods said.

“The only time that we have ever lost a Cup was in Australia (1998), and quite frankly, some of the guys didn’t play or practice that much. It was our off-season, and we got beat pretty badly.

“It’s something that I try to reinforce to the guys, that it is important to be solid, be fresh, and to be sharp because we’re going overseas and we’re playing against an amazing team, and it’s on their soil. These guys are going to be tough to beat. So we’re looking forward to the challenge.”

With Woods scheduled to play only a handful of times between now and December, he will rely on practice at home in Florida and pick-up matches with teammates. He will play the ZOZO Championships in Japan from Oct. 24-27 before his picks are due the following week.

“It has to do with a lot of my competitions I’m going to have down here. I’ll be playing with a lot of the guys here. They’re going to be getting ready for some of the fall events, we’ll have some matches, and that’s always fun because we’re able to talk trash and have a great time and try and get in one another’s pockets.

“That will be something that I will definitely rely on, and obviously the event in Japan will be a big deal.”

The four selections will join Brooks Koepka, Justin Thomas, Dustin Johnson, Patrick Cantlay, Xander Schauffele, Webb Simpson, Matt Kuchar and Bryson DeChambeau in what is one of the most powerful U.S. teams in the event’s history.

Led by Ernie Els, and featuring Australians Marc Leishman, Adam Scott and Cameron Smith, the Internationals have vowed to use new tactics, based on analytics, to try to topple the U.S. juggernaut.

But Woods won’t allow complacency. He hopes most of his team will play in the Hero World Challenge he hosts in the Bahamas the week prior before heading to Melbourne to further secure camaraderie and form.

“We could be (beaten), yes, in theory. But you have to look at the fact that it’s played out there on the golf course, not on paper,” Woods said.

“I’ve been a part of some pretty amazing teams over the years. We had a pretty solid team going down to Australia in ’98. We’ve had some pretty solid teams in Ryder Cups, as well, and I’ve been on the losing end of those. It’s played out on the course. So that’s something that I’ve told my players.”

The Presidents Cup will return to Melbourne and The Royal Melbourne Golf Club for just the third time, from December 9-15, 2019.