Tiger Woods ended 2019 the same way he started it.

It started 245 days earlier at The Masters Tournament, when Woods’ unforgettable year began with his first major championship in 11 years and first green jacket in 14 years. It continued into late October, when he matched Sam Snead atop the PGA TOUR’s all-time wins list with his 82nd career victory at The ZOZO Championship.

And it ended at Royal Melbourne Golf Club, where Woods willed the United States team to a stirring 16-14 win at the Presidents Cup over a formidable International Team. The group did so behind the strength of their playing captain, who was the only player on either side to win each of his matches.

Woods went 3-0-0 on the week to reach 27 career wins in the biennial event, passing Phil Mickelson for most career victories in the event’s 25-year history.

It was a poetic ending to one of the best years in the sport’s storied history.

“It was pretty awesome to play for the greatest player ever,” said Matt Kuchar, who clinched the U.S. victory with a birdie at No. 17 on Sunday. “To have a chance to make a team captained by the greatest player ever that is also a player on the team. I can’t tell you how unique, how cool of a thing that is, to not only play for him but alongside him.

“For us to be in a hole and to come back and win this thing was such a thrill. One, to win it as a team, but to do it with Tiger Woods as our captain was just a huge thrill.”

Woods was overcome with emotion following his team’s comeback victory, and for good reason.

Since the moment he was officially named the U.S. captain at the 2018 Arnold Palmer Invitational, Woods has viewed his position with both responsibility and pride.  From the outset, Woods—ever the competitor that he is—made it his mission to once more beat his longtime rival Ernie Els, captain of this year’s International Team.

“I’ve cried in pretty much every Cup we’ve won,” Woods said. “I’ve been doing this a long time. Any time you have moment where you’re able to do something that is bigger than us as an individual is so much more meaningful and so much more special.”

Woods’ moment did not come easy, however. The United States trailed all three days before its stirring comeback in Sunday Singles, as the analytics-minded Els seemed to play every matchup correctly.

The Internationals put together a 4-1 advantage after Thursday Four-Balls, its first day-one lead since 2005 and largest advantage ever after the first session. And Friday Foursomes appeared on track to follow the same pattern, as the team led in all five matches on the back nine and was projected at one point to go up 9-1 on the scoreboard.

But Woods’ group managed to carve out some hope when it won a pair of matches 1 up on the 18th hole. Patrick Cantlay and Xander Schauffele got the rally underway when Cantlay sunk a 14-foot birdie to beat Joaquin Niemann and Adam Hadwin, and Woods and Justin Thomas did the same 30 minutes later against Hideki Matsuyama and Byeong Hun An despite not holding a lead since the sixth hole.

“I know one thing – if we don’t make those putts, this is a pretty deep deficit,” Thomas said.

But the U.S. saved its biggest triumph for the last, when Rickie Fowler and Gary Woodland erased a 2-up advantage for the Internationals with three holes to play. The Americans carded birdies on Nos. 16 and 17 after sticking their approach shots within 10 feet, then the teams halved the 18th to end in a tie.

“I wouldn’t say we totally lost momentum, but it was, to me, I felt it was a bit of a blow,” Els said later. “The team didn’t react in that way which I was really proud of, but me as captain, and I didn’t reveal it to them, but I felt we had them right in the headlock, and we didn’t quite finish it off on that particular time.”

Though the Internationals would begin Saturday’s double session with a 6.5-3.5 lead, only its third advantage after two sessions in the event’s history, Els knew the Friday stalemate was a massive blow to his team’s shot at an upset.

The U.S. had been headed for its first Foursomes loss in 14 years. Instead, the late rally provided a jolt of much-needed confidence into a team that began the Presidents Cup on shaky footing.

The heavyweight bout continued into the following day, when the Internationals opened up a 9-5 lead after winning the morning Four-Ball session 2.5-1.5. But the United States charged back once more in afternoon Foursomes, putting together a 3-1 session win and narrowly pulling off a clean sweep.

Marc Leishman and Abraham Ancer were five down through 10 holes against Thomas and Fowler, only to pull even and earn half-point for the Internationals. Niemann and An also did the same with a late two-hole deficit, though An missed a chance at a full point when his six-foot putt came up short at the last. Despite that, the late heroics were enough to salvage a 10-8 advantage for the Internationals heading into the final day, the first time it had taken a lead into Singles since 2003.

“Before the week started, we had a plan to get to 10 points by Saturday evening,” Els said. “So that’s why we were so excited (Saturday), losing 3-1, because we knew we got to 10 points. I could have made different choices in the singles. I can take it on my shoulders. It is what it is.”

A dominant display by the United States clinched its eighth consecutive win in the series, and it all started with Captain Woods setting the tone.

Woods went out first against the surprising Ancer, who led the International Team alongside fellow rookie Sungjae Im with 3.5 points. But the Reynosa, Mexico, product never led against one of the best to ever play, as Woods put together a 3&2 victory to begin the U.S. comeback.

“Tiger, the story of his resilience, coming back from what he has with injuries and everything that he’s been through, I think each of us believed in each other because we know we could do what we did today, and we really believed that we could win the Cup,” Tony Finau said. “We are very inspired to play for Tiger, with Tiger, and it’s so satisfying to win this Cup because of that,” he continued. “I think we all believe in each other and we were able to get the job done for our captain and playing captain.”

Finau delivered his own stirring moment, rallying from 4 down through 10 holes against Matsuyama to salvage a tie. He won four straight holes from Nos. 11 to 14 to square the match, then after Matsuyama regained the lead on the 16th, he promptly three-putted from 25 feet on the ensuing hole before ending in a tie. With Patrick Reed and Dustin Johnson dominating their matches with C.T. Pan and Haotong Li, respectively, it was a critical hit to a reeling International squad.

Matsuyama’s team eventually lost its shot at a win after Adam Hadwin missed a 14-foot putt at the last against Bryson DeChambeau to halve the match and leave only a chance at a tie in play for the Internationals. And that soon went by the wayside, too, as Louis Oosthuizen lost a 3-up advantage against Kuchar, who closed out the U.S. win with a vital half point.

“We were up early in a lot of matches and it came down to the very end,” Woods said. “We knew that was going to happen. We had some really strong guys at the end. Actually, strong guys from 1 through 12. We were excited about going into this session. I know we lost the two-team sessions after the four-team sessions, but we were excited about our chances going into singles and we did it as a team.”

It is Woods’ job to share credit for this win, which moved the U.S. to 11-1-1 all-time at the Presidents Cup. But his own players and captain’s assistants are quick to applaud their leader.

“I love seeing other people cry, especially Tiger Woods,” assistant Steve Stricker said. “Tiger did an unbelievable job. It was a privilege. And we’ll keep this on the forefront of our minds forever.”

Woods’ performance in Australia brought things full circle in 2019. After tying Sam Snead atop the all-time wins list two months ago, he did it once more when he became the first playing captain to go undefeated in his team’s victory since Snead at the 1959 Ryder Cup.

It was quite the year for Mr. Woods.

“All of us will look back and have these pictures hanging on our walls and say we played for and alongside Tiger Woods, the greatest player ever,” Kuchar said. “It was awesome.” 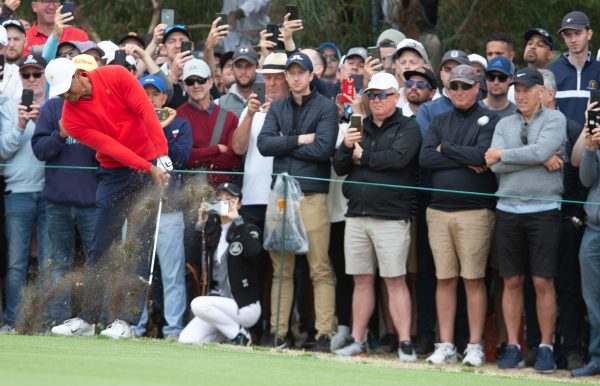