While 24 of the best players in the world prepare to deliver an inspiring and dramatic competition at The Royal Melbourne Golf Club, Presidents Cup officials today announced several unique and interactive fan experiences that will engage fans away from the competition and showcase the Presidents Cup as much more than a golf tournament.

The Presidents Cup will return to Melbourne, Australia and The Royal Melbourne Golf Club for the third time, 9-15 December 2019, when the International Team, led by Captain Ernie Els, will take on the U.S. Team led by Captain Tiger Woods.

The Presidents Cup Media Day, held on 18 November at The Royal Melbourne Golf Club, provided an early preview at how the course will look at Tournament time, with grandstands and corporate facilities nearing completion and ready to welcome more than 100,000 local, interstate and international visitors, with the world-famous composite course entering the final stages of its preparation for the 2019 event.

Amongst the exciting event-time offerings revealed include the official cocktails for each team along with further details of activities outside the ropes at event time both at Royal Melbourne and also at the Presidents Cup Fan Experience at Crown Riverwalk:

Signature Cocktails
The Presidents Cup team has created two signature cocktails for the event – one for the U.S. Team and one for the International Team – that will be found at key locations throughout the site. Thanks to Four Pillars Gin, fans will be able to enjoy two new creations that will only be available at the Presidents Cup. 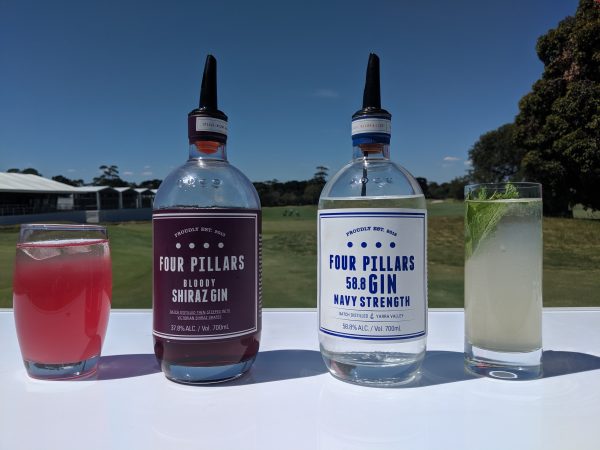 Fan Village at The Royal Melbourne Golf Club
The Fan Village will serve as the central hub of activity during the Presidents Cup. Fans will be able to find a variety of incredible and international food and beverage options for purchase, along with interactive zones and kids’ activities, live music and the event broadcast on super screens. The Fan Village will be located in Sandringham Golf Course and accessed through the Main Entrance Gate 1 accessed via Reserve Road or alternatively via Car Parks A, B, C or D.

World-famous chef and Michelin-starred restaurateur Curtis Stone is bringing his LA eatery ‘Gwen’ to the 2019 Presidents Cup, in collaboration with Dean & McPherson. Gwen is a European-style specialty butcher shop and ﬁne dining restaurant, described by the Hollywood Reporter as “the most ambitious and accomplished restaurant in Hollywood”.

In an Australian ﬁrst, experience a two-course lunch or three-course dinner of Curtis Stone’s curated menu, matched with premium wines carefully selected from the Yarra Valley and beer from local Victorian breweries. A reservation at Gwen at Presidents Cup will be available to any patron who has a general admission ticket and the 120-seat restaurant will be open from Saturday 7 December, to coincide with the Junior Presidents Cup player practice, through to the final day of competition on Sunday 15 December.

The Melbourne Lounge brings an eye-catching rooftop venue to the Presidents Cup Fan Village, celebrating the best of the Presidents Cup’s host destination and the state of Victoria. Fans can discover more about the golf regions of Victoria, including the iconic Melbourne Sandbelt, start the day with an iconic Melbourne coffee by Genovese or enjoy the sunshine alongside the local produced Furphy beer, a Four Pillars gin cocktail or wine from the surrounding vineyards.

Kids HQ – Kids HQ is a haven for youth attending the Presidents Cup, where they’re all invited to come in and have fun, be active and engage with a variety of exciting and educational activities. Kids can try their luck at the putt-putt course, catch appearances from the Junior Presidents Cup teams, and learn how to chip into nets and targets.

Citi Interactive Zone – Citi’s experiential location will offer engaging golf activities for all fans, who can track their scores and progress throughout the week with the use of a unique ID band and public leaderboards.

The Fan Shop – The Fan Shop is the go-to place for all official Presidents Cup merchandise. Fans can stock up on unique gear from top-tier brands such as LACOSTE and Greg Norman. Citi cardholders receive a 10% discount on all full priced merchandise when paying with their Citi card.

Genesis – Automotive luxury brand Genesis will have on display their latest G70 and G80 models.

The live site will be accessible by the public for free and will be the central entertainment hub in the Melbourne CBD, showcasing what’s on offer at the Presidents Cup. Player appearances, live music, limited-edition LACOSTE merchandise along with food and beverage offerings will all be available. Fans will also have the opportunity to purchase tickets for the Presidents Cup within the Fan Experience at Crown Riverwalk.

Some of the activations include:

Citi 44 Million Yard Challenge – As part of the Citi 44 Million Yard Challenge, fans and golf pros alike are working together to collectively drive a golf ball virtually around the world – 43,825,760 yards to be exact – by hitting golf balls in golf simulators and virtually. The online game can be accessed globally by users who go to www.PresidentsCup.com/Citi and Presidents Cup social channels. Fans can come out to help virtually drive a golf ball around the world in the simulator at the Fan Experience at Crown Riverwalk. Onsite at Royal Melbourne, an additional simulator will be in the Citi Interactive Zone at the Fan Village.

Floating Green – Open every evening for two hours, fans can engage in this unique experience by hitting a shot onto a floating green in the Yarra River.

Putting Green & Longest Putt – Fun for the whole family as fans can show off their short game on the putting green or try to sink the longest putt of the day.

Official Merchandise – The Fan Experience at Crown Riverwalk will be the only location where fans see and touch – and purchase – limited-edition merchandise, outside of The Royal Melbourne Golf Club. LACOSTE is the official apparel provider of the Presidents Cup working alongside official merchandise partner Drummond Golf in conjunction with Sporte Leisure.

Heineken Container Bar – Don’t miss the views of the Presidents Cup Fan Experience from the rooftop of the Heineken container bar! As well as a Heineken, enjoy wines from Treasury Wine Estates – a great place to enjoy a post-work beverage!

Gradi – Award winning Italian restaurant Gradi will be serving a range of pizzas, pasta, antipasti and gelato, available for purchase each day of the Fan Experience!

Stage Program and Entertainment – While the Presidents Cup competition is unfolding at Royal Melbourne, two LED screens will display the live tournament feed along with the commentary – so why not enjoy your lunch break over some golf? Outside of competition, the stage will feature local DJs and acoustic acts.

Official Launch Event
The official launch of the Presidents Cup will take place at the Fan Experience at Crown Riverwalk, on Monday 9 December starting at approximately 17.00. Team Captains Tiger Woods and Ernie Els, along with some of their team members will attend the event, take part in a Q&A on stage and kick off the competition with a chipping challenge . A barge in the Yarra River will be transformed into a floating green and the Captains will challenge one another in a closest-to-the-pin contest. There will also be special appearances from Junior Presidents Cup players, ISPS HANDA Disabled Golf Cup players and other high-profile guests of the event.

This is a free event and the public are encouraged to attend.

For more information about the 2019 Presidents Cup, please visit www.PresidentsCup.com .