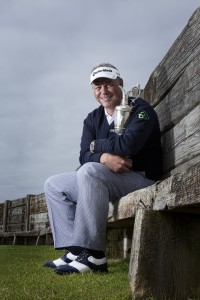 2011 Open Champion Darren Clarke has committed to play the PGA Championship presented by Coca-Cola at the Hyatt Regency Coolum from November 24-27 2011.

Clarke’s career high win at The Open stamped his dominance as one of the World’s best links players where he shot an impressive 5-under-par in extremely difficult conditions.

The Irishman will now look to bring his form to the Hyatt Regency Coolum; where he is sure to enjoy the warmer climate of Queensland’s beautiful Sunshine Coast.

Queensland Premier Anna Bligh said having The Open Champion come to Queensland is a real coup for golf in the state.

“This is shaping up to be the most impressive line-up of talent we’ve seen for the tournament,” Ms Bligh said today.
“To have a champion like Darren Clarke – in addition to recent confirmation of Greg Norman, Jason Day and Bubba Watson – really is a coup for Queensland.
“The PGA is a marquee event on Queensland’s dynamic and growing events calendar. And this will be a chance for local fans to get a first-hand look at the best golfing talent in the world as well as attract visitors and deliver a shot in the arm for the local tourism industry.

This will be Clarke’s first time teeing it up in the PGA Championship presented by Coca-Cola where he is looking forward to testing his game as well as showing his family the sights of the Sunshine Coast.

“I have heard great things about Queensland and the course at Coolum so I am looking forward to playing golf in more warm conditions than I am used to and also testing my game on a different style course to that of a links.”

“My family also cant wait to get to the Sunshine Coast.”

The Irish are dominating world golf with Clarke winning The Open and his younger compatriot, Rory McIlroy, winning the US Open however, an Irishman is yet to win the PGA Championship presented by Coca-Cola in Australia.

“Irish golfers are enjoying lots of success of late and hopefully I can continue this trend, my game is in great shape and I look forward to capping off a great year in Australia.”

Darren Clarke, renowned for setting records, says he is looking to add the PGA Championship presented by Coca-Cola to his 20 career victories.

“Knowing that I could be the first Irishman to win the Australian PGA will be in the back of my mind when I come to play and I hope that I have plenty of fellow Irishman there to cheer me on,” added Clarke.

Brian Thorburn, CEO of the PGA of Australia, looks forward to welcoming Clarke and is pleased to have him apart of what is shaping up to be the biggest year in golf for the PGA Tour of Australasia.

“With stellar fields for the Australian Open and PGA Championship presented by Coca-Cola, the world’s best here for The Presidents Cup and the PGA of Australia celebrating its Centenary in 2011 it’s a huge year for golf and I am very pleased that Darren Clarke is able to come and experience Australian golf at it’s finest.

“I am even more pleased for Queensland and Australian golf fans who will be able to see The Open Champion play in their own backyard, I am sure this is something that will excite them all.”

The PGA Championship presented by Coca-Cola will again be co-sanctioned by OneAsia, with the tournament to be the second-to-last event for the 2011 season on the burgeoning Tour’s Order of Merit.

The PGA Championship presented by Coca-Cola will be played at the Hyatt Regency Coolum on Queensland’s Sunshine Coast from November 24-27, 2011.

Tickets for the event will be on sale shortly – for ongoing updates please visit www.pga.org.au

Commercial opportunities for the PGA Championship are now available – see below commercial contact for further information.

Travel packages are available by contacting the PGA of Australia’s Official Travel Partner, Flight Centre on 1300 778 433

About PGA of Australia

The PGA and its members are the cornerstone of the sport of golf and the industry. The PGA has played a significant role in the popularity and promotion of the game from televised international events through to the local club or driving range where the PGA members introduce and service the 1.2 million golfers who play the game each year. www.pga.org.au

One Response to "The Open Champ Clarke heading to Queensland"