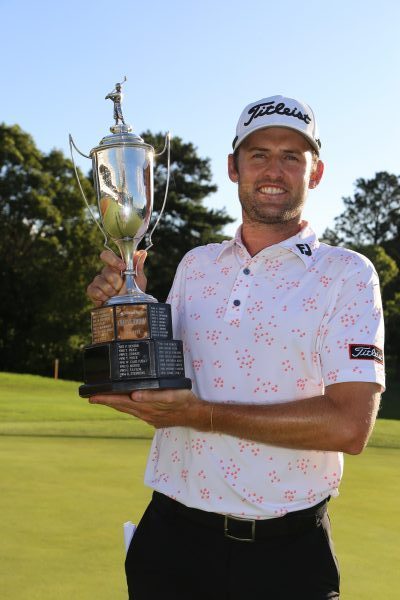 Brad Kennedy, who fired a course record nine-under-par 61 in round one, must still be shaking his head after he had one hand on the trophy coming down the stretch.

A double bogey at the 72nd hole saw him finished on 269 – one short of making the playoff.

“Walking off 15 I thought any chance of winning was almost gone,” Sim admitted after back-to-back bogeys.

“Everything just happened so fast.

“I actually asked Graeme Scott the tournament director whether Scott had finished at 13.

“He’s a mate of mine and I thought I was gone but he said he’d actually finished at 12-under.

“Brad (Kennedy) was over in the trees and I saw him lay-up and I thought, ‘I’ve got a chance here if I hit a good shot and birdie it’, which I did.

“I didn’t have my best stuff today – I don’t really think anyone near the top of the leaderboard did.

“Everyone kept falling away and it was nice to hit a great 8-iron into the last there in regulation and give myself a chance in the playoff.”
Sim won the playoff at the fourth extra hole.

Now he was the Queensland double after winning the 2017 Queensland Open.

Sim won the WA Open in October last year but faced an uncertain future in tournament golf that he is halfway through completing his PGA of Australia bridging course at Burleigh Golf Club.

It’s a far cry from the young man who went toe-to-toe with Tiger Woods in the final round of the 2009 US Open and his latest win ensures the tentacles of pro golf’s lure remain semi-attached.

“I might go to America and do some pre-qualifiers, I don’t know,” Sim said.