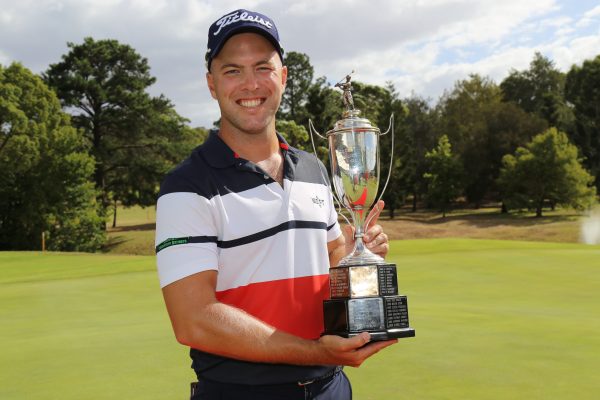 Daniel Nisbet has won the 2019 Coca-Cola Queensland PGA Championship presented by Toowoomba Regional Council in a dominant performance in his home state.

Starting the day with a two shot lead, Nisbet won the title by six shots from Deyen Lawson and Harrison Endycott with rounds of 66, 63, 63 and 64 for a tournament total 24-under 256.

“It’s a little bit surreal at the moment but today went pretty quick so it’s all starting to catch up now,” said Nisbet.

“I’ve been playing pretty well for the last few days so I was confident that I could shoot another good score today.”

“I thought I’d have to shoot another good score to fend off the chasers,” added Nisbet who shot three early birdies and an eagle on the 10th to further enhance his lead.

“I played with a couple of guys who hit the ball a mile so to keep up with them and stay on top of them as well was great.

“I putted well all week so it definitely helps when the putts roll in.”

A double bogey on the 12th did little to shake the Queenslander’s nerve, going on to fire birdies on holes 13, 14 and 17 to secure a dominant win.

The victory at the QLD PGA Championship is Nisbet’s first title in his home state of Queensland and becomes his third win on the ISPS HANDA PGA Tour of Australasia in the past 12 months.

“It’s good to finally get one in my home state,” said Nisbet.

“I’ve been trying for a while so it is great. Finally my family got to see me win an event.

“It’s been a long time for them as my wins have been out of state or overseas so it’s good to have a win with all of them here,” said Nisbet who won the Northern Territory PGA Championship and New Zealand Open last year.

In the event’s 10th staging at City Golf Club, Nisbet was not the only player to commend the club’s grounds staff for the impeccable greens on display across the tournament.

“The course was great,” continued Nisbet.

“This is the best I’ve seen the greens up here so it’s a privilege to play on greens this good especially in Queensland.

“We don’t always get blessed with greens this good up here so it’s been great.”

>From Toowoomba Nisbet heads to Queenstown to defend his New Zealand Open title in the tournament’s 100th staging.

“It’s a big confidence boost,” said Nisbet of the victory ahead of his title defence.

“I head to the New Zealand Open tomorrow and I’m defending there so I’ve got a big 10 days coming up.

“I’m hitting the ball well and I’m putting well so for me those are the two key aspects of my game.

“If they continue to roll in and if I find the fairway then it’s happy days.”

Nisbet becomes the third Daniel to win the QLD PGA Championship in as many years, following in the footsteps of 2017 winner Daniel Pearce and 2018 victor Daniel Fox.

Victorian Deyen Lawson takes a strong joint runner-up result overseas as he heads to the European Tour event in Oman next week.

Highlighting his round with an eagle on the 10th, Lawson’s fourth round score was hard earned with a number of shots hit from the rough salvaged for par.

A late charge of four birdies in a row on holes 10 to 13 propelled young-gun Harrison Endycott into a tie for second place, while an additional birdie on 17 closed in on Nisbet’s lead.

While unable to get close enough, Endycott will take positives from Queensland and strong form to the New Zealand Open where he will look to challenge the front-runners at the Asian Tour co-sanctioned event.

The ISPS HANDA PGA Tour of Australasia moves to New Zealand from 28 February to 3 March 2019 for the 100th New Zealand Open.