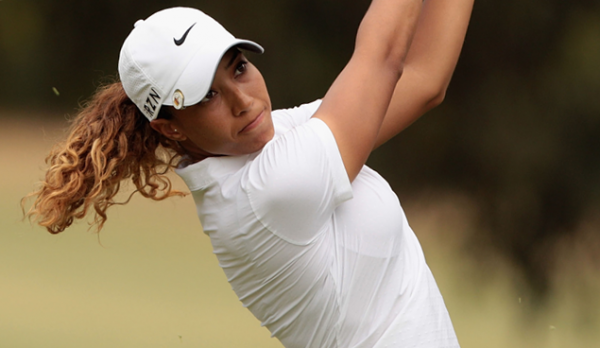 Cheyenne Woods’ new season will begin in Australia, with her first stop to be at the Oates Vic Open at 13th Beach Golf Links.

Woods, the niece of 14-time men’s major champion Tiger Woods, has signed on to tee it up in Barwon Heads for the first time for a share of $650,000 from February 1-4.

The Oates Vic Open’s unique appeal and the co-sanctioning agreement between the Ladies European Tour and the ALPG Tour will again deliver one of the strongest women’s fields seen on Australian shores in 2018.

“I’ve heard quite a bit about the Oates Vic Open from girls I know that have played and I’ve heard so many good things,” said Woods.

“Last year, I tuned into the live stream of the playoff between Sandra [Gal] and Mel [Reid] and I could just tell it’s a great event.

“I made sure to put it on my schedule and this year I’m so glad I’m able to play.”

The 2018 Oates Vic Open will be the first time the 27-year-old has played a professional event with alternating men’s and women’s groups, something she’s keen to experience.

“It’s something that has definitely stood out in the past when people have talked about it and how well that combination works,” said Woods.

“It’s a really interesting aspect to the event and I’m looking forward to playing alongside the men’s tour.”

Woods will be chasing her second crown on Australian soil after she trumped Australia’s current number one female golfer Minjee Lee at the 2014 RACV Ladies Masters.

The win was Woods’ first on the Ladies European Tour – and second as a professional – and has since helped her split her time between the world’s two biggest circuits.

“I’ve made sure to come down to Australia every year to start out my season, it’s a great start to the year with the weather and the golf courses,” said Woods.

“Any opportunity to play somewhere new is exciting. Every single golf course I’ve played in Australia has been amazing, from Royal Melbourne to Royal Pines.

“My first time in Australia was a few years ago and I didn’t realise how big it actually is! I’ve had the chance to see every bit of Australia in the years since so this year will be exciting.”

Woods enters her fourth full season on the LPGA Tour in 2018 with conditional status after finishing 107th on the money list last season.

After earning starts at the KPMG Women’s PGA Championship and the US Women’s Open, Woods produced her best golf late in the year when she finished in the top half of the leaderboard in each of her last five LPGA Tour events.

Her final start of 2017 yielded an outright fourth finish at the LET’s Fatima Bint Mubarak Ladies Open in November.

After some time away from the game, Woods will be one of a number of big names taking on defending English champs and Solheim Cup stars Mel Reid (2017) and Georgia Hall (2016) around 13th Beach next month.

“I had the longest break I’ve had in I don’t know how many years! It was nice to spend some time at home, rest and enjoy being with family before getting back into practising,” said Woods.

“I’ve been working with my coach here in Phoenix on a few swing tweaks that I think will help with consistency and a bit of distance.

“I’m planning out my schedule now so I don’t find myself too exhausted throughout the year and I’m always able to bring my A-game.”

Victorian Acting Minister for Sport Philip Dalidakis said the event will be a great showcase of the women’s game.

“Women’s sport is finally getting the attention it deserves, and to have players of the calibre of Cheyenne Woods and past winners Mel Reid and Georgia Hall here is a coup for Victoria and will inspire even more girls to play golf and other sports,” said Dalidakis.

“The Andrews Labor Government is working hard to maintain our status as Australia’s home of golf – we’ve already locked in the Presidents Cup in 2019 and the Australia Open in 2020 and 2022.”

City of Greater Geelong Mayor Bruce Harwood is also excited to welcome some of the game’s top talents to the Bellarine Peninsula.

“The City is proud to sponsor the 2018 Oates Vic Open and with high calibre players such as Cheyenne Woods, Mel Reid and Georgia Hall signed up, this will be an event not to be missed,” said Harwood.

“If you’re into golf, or just want to experience a world-class sporting event in one of our region’s most spectacular locations, make sure you get along to this year’s Oates Vic Open.”

The Oates Vic Open is the only golf tournament of its kind around the world, with the men’s and women’s fields competing on the same courses, at the same time, for an equal share in the prize money.

Those unable to make the trip to Barwon Heads in February will still be able to watch the weekend’s action with the return of the Oates Vic Open live stream.

Hosted on Facebook LIVE and YouTube, fans across Australia and around the world will be able to follow the final 36 holes of the tournament thanks to the Oates Vic Open’s professional broadcast team.

Find out more about the 2018 Oates Vic Open at www.vicopengolf.com