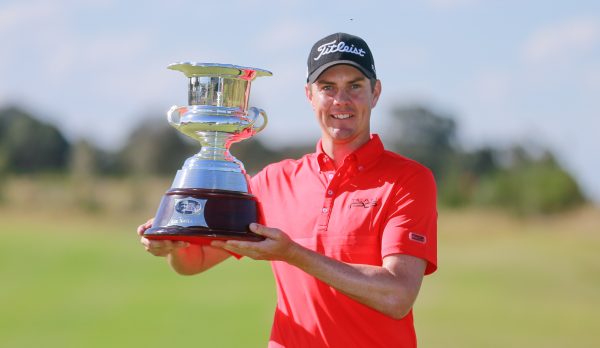 Adam Blyth captured the biggest title of his career with a gritty fourth round in the NSW Open at Stonecutters Ridge.

Battling winds above 40km/h, a bushfire burning in the distance, and the weight of expectation after taking a four-shot lead into the final round, Blyth composed himself on the back nine to win in front his family by three shots at -23.

He also picks up the biggest paycheque of his career ($72,000) with his second title of the year after taking out the South Pacific Open in September.

With birdies on his opening two holes, Blyth seemed destined to turn it into an afternoon stroll. But when he reached the windward holes of three, five, six, seven, eight and nine, his wedge game deserted him. He turned the front nine in 40, but his challengers failed to capitalise. Both Peter Wilson (1 over) and Rhein Gibson (even) in the final group had chances to pressure for the lead, but also struggled into the wind.

Leading amateur Brett Coletta’s attempt to break a 30-year-old record – winning both the Qld and NSW Open in the same year – was almost realised, as the Victorian turned the front nine three-under, and kept the birdies coming on the back nine. Unfortunately he ran out of holes and finished tied for second at -20 with Jarryd Felton.

Wonderful challenges came from Wade Ormsby and Brett Coletta. Ormsby came from nowhere on the final day, shooting an eight-under round only matched by veteran Stephen Leaney and Victorian Lucas Herbert who both shot 64. Ormsby’s round included an eagle and eight birdies, with two bogeys on the back nine the only blemishes on his round.

Penrith teenager Josh Gadd found the few birdies that eluded him the previous day with a three-under round to finish his first pro tournament at -12 and tied for 32nd.

Apart from Coletta, who challenged the leaders, other notable amateur performances came from Austin Bautista who shot his best round of the week, a six-under 66 that left him in a tie for 19th, with all four rounds under par.

Scottish, 21-year-old, Connor Syme was steady in an event he had a chance of winning, at even par throughout the final round to finish at -15 and in a share of 13th. He’ll be disappointed after playing himself into the final two groups this weekend, but has plenty of excellent opportunities ahead.