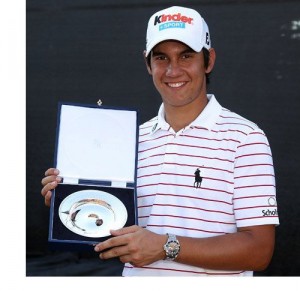 Manassero is currently ranked #30 in the World and has already established himself as an international star, breaking records at every turn. He became the youngest winner in European Tour history when he captured the Castello Masters in October 2010 at 17 years and 188 days.  He claimed his second European Tour win at the 2011 Malaysian Open shortly before his 18th birthday on 19th April.

“We are delighted that Matteo has included the JBWere Masters in his 2011 schedule and his achievements to date are remarkable.  We look forward to announcing further players in the weeks ahead but as in previous years, we have maintained an affordable and accessible ticketing policy with daily tickets to the JBWere Masters still under $50.

“Another important element of our ticket policy is to promote golf and we are pleased to continue our policy of providing complimentary access to children under 14 years of age accompanied by a paying adult ticket holder.”

Minister for Sport and Recreation, Hugh Delahunty said the Victorian Government was once again delighted to support the event and invited golf fans to secure their tickets now.

“The JBWere Masters is a fantastic golf event that has enjoyed unprecedented interest here in Melbourne in recent years,” Mr Delahunty said.

“Part of its appeal is its ability to keep giving fans a new experience, and this year we are delighted to welcome the World’s number one ranked player, Luke Donald, and teenage Italian superstar, Matteo Manassero, to Melbourne for the very first time.

“The JBWere Masters provides an inspiration to budding young sports stars around the world, and with this year continuing the complimentary ticket arrangement for children under 14, we hope to see many more young people get involved in this great event, and ultimately, the game of golf.

“As an extension of this I am delighted to announce that 9 year-old Karl Vilips will be this year’s number one ticket holder. Karl won the US Kids World Championship earlier this month at Pinehurst and has been invited to play in the Masters Pro-Am,” he said

Tickets to see world class players on a world class course are available for all four tournament days plus practice and Pro-Am day.

Tickets are available through Ticketek on 132 849,  www.ticketek.com.au or by visiting any Ticketek outlet.

For latest news and more information on the 2011 JBWere Masters go to www.australianmasters.com.au or join the Masters’ fanbase on Twitter @aussiemasters or Facebook at www.facebook.com/australianmasters

The 2011 JBWere Masters will be staged at The Victoria Golf Club from 15-18 December.

PLEASE NOTE: one child under 14 years of age will be permitted complimentary access for each paying adult ticket holder

One Response to "Matteo Manassero to join Donald, Poulter and Appleby at JBWere Masters"