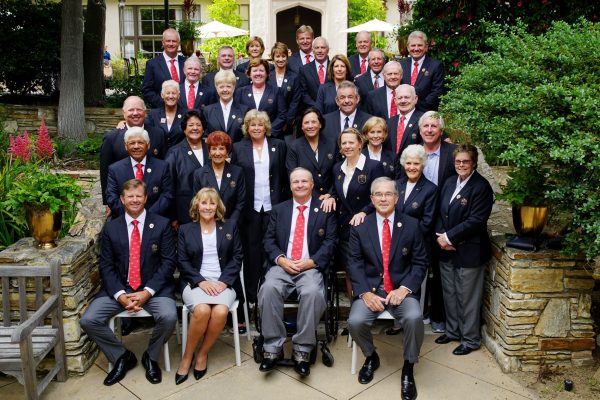 Australian golfing superstar Jan Stephenson has fulfilled a lifelong dream this morning, being inducted into the World Golf Hall of Fame at a ceremony in Carmel-By-The-Sea, California.

For Stephenson the honour was overwhelming, having twice been rejected the 67-year old had felt that her dream of becoming a member of the World Golf Hall of Fame would probably remain just that.

However, a telephone call from her colleague and good friend Nancy Lopez back in October last year changed all that.

Lopez had been the one to deliver the bad news the past two years that Stephenson had not been selected to the Hall and when Stephenson saw Lopez’s number come up on her phone she braced herself once again for more bad news.

However, this time the news was not bad, and an emotional Lopez finally blurted out the good news that Stephenson had waited what had seemed like a lifetime to hear, this time she had been voted in!

An emotional Stephenson took to the stage tonight in Carmel and paid tribute to those who had an impact on both her career and her life;

“Looking around the room I see so many people who have helped me and supported me over the years,” said Stephenson in her World Golf Hall of Fame acceptance speech.

“It is amazing to see friends from all walks of life and from all kinds of places, be here because of the incredible game of golf. To all my friends and family, thank you for your support.

“As I look back on my career, more than the wins and the fame, what stands out most to me is the remarkable women I’ve had the opportunity to compete with, get to know and call my friends. I consider myself lucky to have played in some of the most amazing times.

“I even got to witness the birth of career women’s golf  and got to play with fellow Aussie and friend Karrie Webb in her very first professional event in Australia.

“To be now counted amongst the stars as a World Golf Hall of Famer is not only an honour, but it’s so humbling.

“Golf has taken me on a wonderful journey, allowing me to travel around the world and make relationships that have lasted a lifetime and now it has taken me here to the World Golf Hall of Fame. It’s truly a dream come true.”

“I’m really excited for Jan to finally be recognized for her outstanding career and her contributions to golf in being inducted into the WGHOF,” said Webb.

“As an Australian woman, Jan was really the trailblazer for all Aussie girls to aspire to one day compete on the LPGA tour in the US. With her success on and off the course creating her notoriety, it inspired the generations behind her to believe that they too could be successful playing on the LPGA.”

“It’s really great to see Jan inducted, she is an icon of her time and has been a role model for many both in Australia and around the world,” said Rodger Davis.

“It was a pleasure to play in the same era as her, see her go from strength to strength throughout her career and become a legend of our game.”

“It is fantastic to see Jan join the World Golf Hall of Fame; it’s a position that she absolutely deserves,” said Ian Baker-Finch.

“The work Jan has done for golf both on and off the course has bettered our game and is a testament to who she is as a person and the love she has for our sport.

“She should be really proud, as we are, of her career, her achievements and her new position among elite company as a member of the World Golf Hall of Fame.”

There is absolutely no doubt that Stephenson, 67, had the golf resumé to warrant her selection — 16 LPGA Tour victories, plus wins on the Ladies European Tour, LPGA of Japan and Asian Tour as well as three LPGA major championships: the 1981 du Maurier Classic (then a major), 1982 Women’s PGA, and 1983 U.S. Women’s Open. She also was the 1974 LPGA Tour Rookie of the Year.

Since her playing days Stephenson has been a driving force behind the fast-growing LPGA Legends Tour and these days keeps herself busy as the owner of Tarpon Woods, a golf course in the Tampa area which she purchased in April 2017.

The club had seen better days when she purchased it, but Stephenson put her own distinct stamp on the property, making it a home for military veterans, first responders and the disabled.

Stephenson, an ambassador for blind and disabled golf through ISPS Handa, bought the club through her foundation, Jan Stephenson’s Crossroads where her mission is, “Giving to those that have given so much,” and “Every day is Military Appreciation Day at Tarpon Woods.”

In 2017 Stephenson was awarded the prestigious Military Order of the Purple Heart for her services to the military in the US.

Stephenson also has her Jan Stephenson line of wines and a new line of flavoured rums which she is extremely passionate about.

With her new business ventures Stephenson doesn’t get to play much golf these days and almost dreads when she does compete in a tournament.

“I’m so upset because I haven’t had a chance to play or practice and it makes it even worse, and then you don’t feel like you can compete, and then you have a high score and you feel miserable,” she said. “That part never goes away.”

Stephenson thought an induction into the World Golf Hall of Fame would never come her way after being passed over so many times, but there she was at Pebble Beach today with fellow inductees Retief Goosen, Billy Payne and Dennis Walters finally receiving the accolades and the recognition she deserves.

WORLD GOLF HALL OF FAME – CLASS OF 2019:
Peggy Kirk Bell, United States
Lifetime Achievement Category
Margaret Anne “Peggy” Kirk Bell took up the game as a teenager, making a name for herself as an amateur star. She went on to become a charter member of the Ladies Professional Golf Association in 1950 after winning the 1949 Titleholders Championship and participating on the winning 1950 Curtis Cup team. She received the PGA of America’s First Lady of Golf Award in 2007 and was an avid supporter of the game as a top 100 golf instructor, becoming the first woman selected into Golf Magazine’s World Golf Teachers Hall of Fame.

Retief Goosen, South Africa
Male Competitor Category
Known affectionately as “The Goose,” Retief Goosen sat within the Official World Golf Ranking’s top 10 for more than 250 weeks from 2001 through 2007. His 33 worldwide wins include two U.S. Open Championships in 2001 – the same year he was named European Tour Player of the Year – and 2004. Goosen led the European Tour Order of Merit in 2001 and 2002. He also played in six consecutive Presidents Cups from 2000 to 2011 as part of the International Team.

Billy Payne, United States
Lifetime Achievement Category
During his 11 years as Chairman of Augusta National Golf Club and the Masters Tournament from 2006 to 2017, William Porter “Billy” Payne oversaw a number of significant achievements. He originated Drive, Chip and Putt with the USGA and PGA of America in 2013 and established the Asia-Pacific Amateur and Latin America Amateur Championships, each offering guaranteed Masters’ invitations to the winners. Named the recipient of the GWAA’s William D. Richardson Award, Payne also received the Olympic Order of Gold after serving as president and CEO of the Atlanta Committee for the Olympic Games from 1992 to ’96. Continuing his legacy and involvement with the Olympics, Payne was a key figure in the successful return of golf to the 2016 Games.

Jan Stephenson, Australia
Female Competitor Category
In her first season on the LPGA Tour in 1974, Jan Stephenson was named LPGA’s Rookie of the Year. She went on to lead an impressive career with 20 professional victories, including 16 on the LPGA Tour. She is a three-time Major Champion with wins at the 1981 du Maurier, 1982 LPGA Championship and the 1983 U.S. Women’s Open. Her impact on the game extends outside of her play as one of the founders of the Women’s Senior Golf Tour. She is involved with golf course design and has made many charitable contributions including being an honorary chair of the National Multiple Sclerosis Society. Stephenson was also honored with the Order of Australia Medal in 2018 for her contributions to the game of golf.

Dennis Walters, United States
Lifetime Achievement Category
Dennis Walters is an elite golfer who was paralyzed from the waist-down at the age of 24 following a golf cart accident. He has since dedicated his career to sharing life lessons and inspiring fans and disabled golfers of all ages through golf clinics and special performances at more than 3,000 worldwide appearances. Former spokesperson and national ambassador for The First Tee, his message is to always continue hoping and dreaming. He is one of only 11 honorary lifetime members of the PGA of America. Walters was also honored with the 1978 Ben Hogan Award and was a 2018 recipient of the USGA’s Bob Jones Award.