Your votes are in, and Australia’s favourite 18 holes have been named 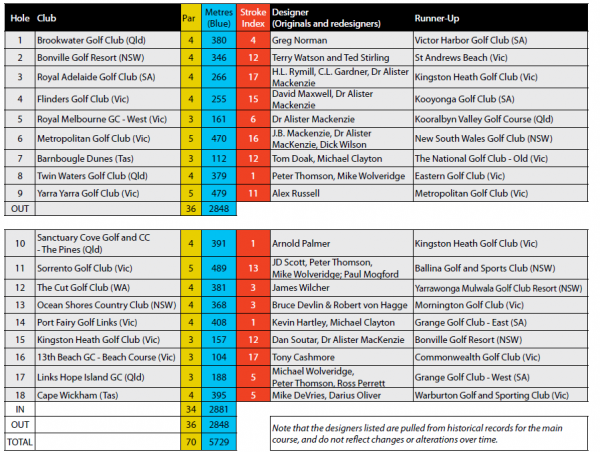 Earlier this year, Inside Golf put out a call to Australian golfers to identify your favourite 18 holes in the country. Our goal? To create a “Dream Course” that includes Australia’s very best 18 holes. But not just any 18 holes…we wanted your picks for the best 1st hole, the best 2nd hole, etc.

Now, after more than 20,000 individual votes, spanning many months of nominations and voting, the Australian golfing community has spoken!

Congratulations to the 18 winners below, as well as the runners-up, who beat out hundreds of nominees and finalists from across Australia. In truth, many of the races were extremely tight, with a few dozen votes separating some of the winners from the runners-up.

On a State/Territory basis, Victoria proved to be the big winner, with a total of eight holes making it to the scorecard. Queensland was next best with four, New South Wales and Tasmania grabbed two each, with Western Australia and South Australia nabbing one each. (It should be noted that the percentages of overall votes were of a similar geographic spread, thus Victorian golfers were slightly more active in their nominations and finalist voting, etc.)

Interestingly (perhaps amazingly) the 18 individual holes somehow managed to add up to a par of 70. To be honest, when we created this project, we had expectations that the course par could be anywhere from the mid-sixties to the mid-eighties, so for it to fall within a shot of the par-72 norm was quite exceptional.

In terms of course length, the “Dream Course” falls towards the shorter end of the spectrum, with a total measurement of just 5729m (Note: measurements/yardages were taken from the Blue tees, as listed on various club websites or GolfLink, so the numbers may vary from the course’s actual scorecards). The front and back nines are also, surprisingly, extremely balanced in total distance, with each nine tipping the scales at over 2800 metres.

The individual holes’ designers also revealed an interesting insight. Proving that he truly created some timeless designs, Dr Alister Mackenzie’s name tops the list of architects with the most individual wins, with no less than five holes attributed to the great course designer (in whole or in part via consulting/visits). This includes a four-hole stretch on the front nine.  The late Peter Thomson, with partner Mick Wolveridge, grabbed three gongs, while Michael Clayton received two awards.

Interestingly, the front nine is populated with holes that feature higher course/stroke indexes – with six of the nine holes indexed at 11 or above. This could mean that most golfers who voted enjoy courses/holes that are slightly easier (or more fun) as they begin their rounds. The back-nine of the Dream 18 shows more teeth, however, with six holes rated below nine, though the inclusion of three par-3s on the nine could offer a bit of relief to the club golfer.

There were also a few surprises/upsets that grabbed our attention. The devilishly short 112m par-3 7th at Barnbougle Dunes pipped the spectacular Par-3 7th at The National. The highly underrated/unsung Port Fairy Links nabbed a gong with their picturesque 408m Par-4 14th hole, which received more votes than the 14th at The Grange – West (SA). In the true nailbiter of the competition, the par-3 16th at 13th Beach pipped the 16th at Commonwealth by a single vote! We should also note the appearance of smaller courses like Victor Harbor (SA), Warburton (Vic) and Ballina (NSW) on the runner-up lists. Congratulations to these Aussie battlers!