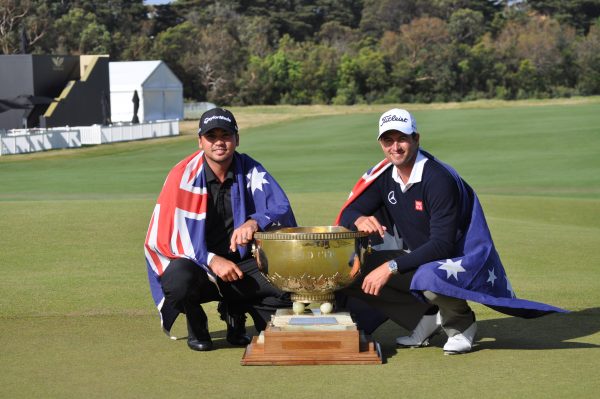 Commitments from a collection of golf’s biggest stars have arrived and the 58th playing of the World Cup of Golf will feature a world-class and diverse field of 28 two-man teams in a return to its previous format, with teams playing for national pride as they represent their countries at Kingston Heath Golf Club in Melbourne on November 23-27.

While the highest-ranked players from their respective countries have officially qualified and committed to the World Cup of Golf, players have until August 26th to choose their playing partner. Some players have opted to do so already, while others will take their time in deciding their teammate.

Headlining the field are Australians Jason Day and Adam Scott, who return to defend their title from the last playing of the World Cup of Golf in 2013. The World Cup of Golf returns to a strictly team format in 2016 after a combined individual and team competition in 2013. Day, after winning the individual competition in 2013 as well as the team title with Scott, has since taken his career to new levels with nine PGA TOUR victories including two World Golf Championships wins and his first major championship victory at the 2015 U.S. PGA Championship. During this remarkable run, Day has reached No. 1 in the Official World Golf Ranking, where he currently stands, as well as No. 1 in the PGA TOUR’s FedExCup standings.

“The victory at the 2013 World Cup of Golf was a kick-start to a phenomenal stretch of golf for me,” Day said. “I am truly looking forward to the new team format with Adam. I really can’t imagine a better scenario than to represent Australia in our home country, with one of my good mates at Kingston Heath, one of my all-time favorite courses.”

Scott returns to Kingston Heath as a player with a successful history at the world-renowned course, including a victory at the Australian Masters in 2012. A 13-time winner on the PGA TOUR, Scott is one of five players with multiple victories on TOUR this season with wins in back-to-back weeks at the Honda Classic and the World Golf Championships-Mexico Championship. Scott ranks No. 7 in the Official World Golf Ranking. Scott and Day have played on three International Teams (2011, 2013 and 2015) on the Presidents Cup including in 2011 in Melbourne.

“Since the announcement that the World Cup of Golf was returning to a true, team format and would be played at Kingston Heath, one of my favorite courses in the world, I have been looking forward to teaming up with Jason to defend our 2013 title,” Scott said. “I am excited to be representing my country alongside Jason, whose recent record shows why he is one of the most talented players in the game.“

“Anytime I can represent my country, I get excited. It is a great honor to put on the red, white and blue,” Watson said. “I’ve been wanting to make the World Cup of Golf team for a while. I love the team format, it is different to other events that we play and I know it will be a great experience.”

A member of the winning U.S. Presidents Cup team when the event was played in Melbourne in 2011, Watson also shared his love for the golf courses and the fans in Australia.

“I have visited Melbourne a couple of times. I love going to Australia the Sandbelt courses are awesome.  They normally play super fast and you have to be creative to play well which suits my game. The fans are great and very enthusiastic.  Australians are huge sport fans and that creates a special atmosphere.  I can’t wait to get down there.”

The No. 6 player in the Official World Golf Ranking, Watson’s most recent victory is the Northern Trust Open earlier this year at Riviera Country Club in Los Angeles.

England’s Danny Willett closed with a final-round, bogey-free 5-under 67 at The Masters this year to win his first career major championship by three strokes over fellow Englishman and World Cup of Golf teammate Lee Westwood, whom he was paired with during that final round, and defending Masters Champion Jordan Spieth. Willet’s win at Augusta was his second of the year, having won the European Tour’s Omega Dubai Desert Classic in February. Willett, who represented Great Britain in golf’s return to the Olympic Games in Rio, is one of 24 players to commit who also represented their country as an Olympian. This will be Willett’s second appearance at the World Cup of Golf, having played in 2013 with Chris Wood.

“It’s always great to represent your country. You don’t get the chance to do it too often so I’m excited about playing the World Cup. I was at Royal Melbourne in 2013, and although I didn’t play as well as I would’ve liked, it was a cracking course and I’ve heard Kingston Heath is just as good,” Willett said. “It’s a different format this time so I’m really looking forward to playing with Westy [Lee Westwood]. He’s played in nine Ryder Cups and has unbelievable experience of foursomes and fourballs, so I couldn’t have picked a better partner.”

Westwood has 41 worldwide victories between the PGA TOUR, European Tour, Asian Tour, Japan and Australasian Tour. Despite his success around the globe, this will be the first time that Westwood has played in the World Cup of Golf.

“I’ve never played the World Cup before so this will be a first for me. Over the past couple of years Danny has shown what he’s capable of and I’ve got no doubt he’s going to prove a great partner, so I’m looking forward to pairing up with him,” Westwood said. “I’ve always enjoyed team golf. It’s an exciting format and it adds to the occasion when you’re playing for your country, so hopefully we can bring the trophy home with us.”

Knox recently notched his second PGA TOUR win with his victory at the Travelers Championship to go along with his first TOUR victory in November at the World Golf Championships-HSBC Champions in Shanghai, China. His stellar play has moved the Scot inside the top 20 in the Official World Golf Ranking. As one of the five two-time winners on the PGA TOUR this season, Knox is currently No. 4 in the FedExCup standings. This will be his first time representing Scotland in the World Cup.

“I can’t wait. When I found out they were going to play the World Cup at Kingston Heath in Australia – I’ve never been to Australia – so it was super exciting to get the chance to go there,” Knox said. “I’ve heard the golf course is one of the best in the world so it will be fun. To represent Scotland is obviously a dream come true.”

Duncan Stewart claimed his first European Challenge Tour title in May at the Challenge de Madrid, as the experienced Scot battled tricky conditions on the final day in the Spanish capital to win by a single stroke. He has known team-mate Knox for most of his life, the pair having grown up together in the Scottish Highlands and attended the same University in America, Jacksonville. One of the highlights of his collegiate career came at the 2006 Atlantic Sun Conference Championship, where he retained his title – after beating Knox in a play-off.

Japan’s Hideki Matsuyama, a two-time winner on the PGA TOUR including his playoff victory over Rickie Fowler at this year’s Waste Management Phoenix Open. He is currently No. 20 in the Official World Golf Ranking thanks, in part, to 6 top-10 finishes on TOUR this year including a T4 at the U.S. PGA Championship. This is Matsuyama’s first-ever appearance at the World Cup of Golf.

Cabrera Bello has come awfully close to winning this year on the European Tour for the first time since 2012. Two runner-up finishes and a T3 at the World Golf Championships-Dell Match Play show how well he has played. While the two-time European Tour winner has yet to break into the winner’s circle, his consistency has him ranked inside the top 30 at No. 27 in the Official World Golf Ranking, and virtually guaranteed him a Ryder Cup debut at Hazeltine in September. The Spaniard has made the cut in each of his 14 stroke play events on the European Tour this season – indeed, his last missed cut was in October 2015. Represented Spain in the Olympic Games, and played in the 2013 World Cup of Golf, where he finished 53rd in the individual competition.

Victoria’s Minister for Tourism and Major Events John Eren said the World Cup of Golf shaped as one of the hottest dates on Victoria’s calendar of major sporting events.

“We’ll be welcoming golfing royalty back to Victoria when our two stars Adam Scott and Jason Day fly Australia’s flag against a star-studded field at one of Australia’s very best courses, Kingston Heath.

“It’s going to be a blockbuster tournament that will attract the attention of golf fans right around the globe. It’s a big boost to the Victorian economy, and another chance to show the world we have the best of everything,” Minister Eren said.

“The World Cup of Golf is one of the most historic events in global golf,” said Executive Director Matt Kamienski. “The field is comprised of many of the game’s best players. Fans in Australia can expect a thrilling and unique competition as we watch Jason Day and Adam Scott in their attempt to defend their title on home soil against the likes of players like Bubba Watson, Danny Willett and Lee Westwood and many of the other top players. But what excites me the most about the World Cup of Golf is watching all of the teams, those who are household names and those from areas where golf’s popularity is just beginning to form, play with true national pride on the line. Fans should get their tickets now and reserve their place in being a part of one of golf’s true crown jewels.”

PGA of Australia CEO, Brian Thorburn said, “Australia is a proud sporting nation and golf holds a special place on the sporting landscape each summer.

“Bringing the world’s best players to Australia is a coup for our country. We hope that by having these talented athletes, including our own World Number 1 Jason Day, on our shores will help inspire the next generation of Aussie golfers,” Mr Thorburn said.

The 2016 tournament will return to a 72-hole, stroke play, two-man team event format.  The first and third days of competition will be the foursomes (alternate shot) format and the second and final days are fourball (best ball) play.

Tickets and hospitality packages starting at $30 are now available by visiting the World Cup of Golf website at www.WorldCupofGolf.com.

The 2016 World Cup of Golf will mark the fifth time in the tournament’s history that it will be played in Australia and the first at any course other than Royal Melbourne.