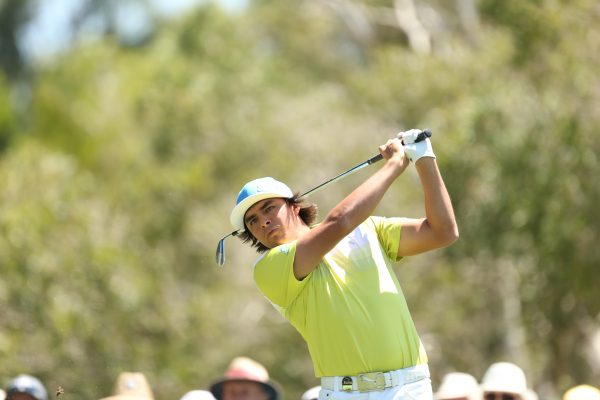 Tournament officials have announced that six-time international tournament champion and recent U.S. Olympian Rickie Fowler has replaced Bubba Watson as the top player to represent the United States at the World Cup of Golf in Melbourne, Australia, at Kingston Heath Golf Club on November 23-27. Fowler quickly chose six-time PGA TOUR champion Jimmy Walker, who won his first career major championship at the U.S. PGA Championship this year, to be his partner in the two-man team competition.

Argentina’s Emiliano Grillo also withdrew from the event and after Andres Romero chose not to commit, CT Pan of Chinese Taipei committed as the next player to qualify. In 1972, Hsieh Min-Nan and Lu Liang-Huan won the World Cup of Golf for Chinese Taipei in Australia.  Additionally, New Zealand’s Danny Lee confirmed his selection of his Olympic teammate Ryan Fox as his partner for the 58th edition of the event. Lee, a three-time winner internationally, finished T20 in his only previous appearance at the World Cup of Golf in 2009.

Watson had expressed his desire to play on the U.S. Team for some time and while he was excited to represent his country and play in Australia, he ultimately changed his mind due to scheduling and personal reasons.

“It was a very difficult choice not to play in the World Cup of Golf. I was extremely excited to have the opportunity to represent my country and to play in Australia, a place where I have always enjoyed playing golf,” Watson said. “Rickie and Jimmy will do a great job as a team and I wish them the best.”

Fowler and Walker will both be playing in the World Cup of Golf for the first time. Fowler, a three-time champion on the PGA TOUR has also won events on the European Tour and the Asian Tour. He begins the FedExCup Playoffs this week at No. 28 in the standings with 7 top-10 finishes. Fowler began the season coming off his most successful season of his career in 2014-2015 where he won twice on the PGA TOUR with a memorable and historic performance at THE PLAYERS Championship and later at the Deutsche Bank Championship — where he will defend his title next week. He also won the European Tour’s Aberdeen Asset Management Scottish Open in 2015.

Walker and Fowler were paired together twice at The Presidents Cup 2015, most notably winning over Anirban Lahiri and Thongchai Jaidee 5-and-4.

“Coming off the amazing experience that I had at the Olympics, it’s great to have the chance to put on the red, white and blue again and play for the United States in the World Cup of Golf,” Fowler said. “Jimmy is not only one of my favorite guys out here on TOUR, but he is clearly one of the most talented players on our TOUR as well. I think we’ll make a fantastic team and our strengths will work well together. I’ve heard great things about Kingston Heath and can’t wait to get to Australia.”

In his sixth start at the PGA Championship, Walker followed a holed bunker shot for birdie at the par-4 10th

with a 30’ 2” birdie at the par-4 11th to get to 13-under and two strokes clear of Jason Day. Walker would never lose the outright lead, post a 3-under 67 and claim a one-stroke victory. The win was Walker’s first major championship. All of Walker’s six PGA TOUR victories have come in the last three seasons after playing seven seasons on TOUR without a win.

The top players from the 28 qualifying countries committed to the event on August 16 and have until August 26 to officially choose their playing partners. Already, the field for the World Cup of Golf in 2016 has a number of golf’s biggest names joining Fowler and Walker including defending champions Jason Day and Adam Scott, England’s Danny Willett and Lee Westwood and Japan’s Hideki Matsuyama.

The 2016 tournament will return to a 72-hole, stroke play, two-man team event format.  The first and third days of competition will be the foursomes (alternate shot) format and the second and final days are fourball (best ball) play.

Tickets and hospitality packages starting at $30 are now available by visiting the World Cup of Golf website at www.WorldCupofGolf.com.

About the World Cup of Golf:  The 2016 World Cup of Golf will mark the fifth time in the tournament’s history that it will be played in Australia and the first at any course other than Royal Melbourne.

Voted the world’s most liveable city for the past six years, Melbourne is a leader in staging international sporting and cultural events, with its super-friendly people ready to welcome World Cup of Golf visitors. The city is famed for its laneways and cafe culture, known as Australia’s coffee capital, and is home to vibrant arts, music and fashion scenes. Melbourne’s food credentials are attracting global attention and the city is the gateway to Victoria, including 21 wine regions, the stunning Great Ocean Road scenic drive and abundant native Australian wildlife. Victoria’s landscapes offer everything from international surf beaches, islands and coastal experiences to Alpine mountain ranges and inland lakes. Victoria is also a popular destination for domestic and international golfing tourism, famed for its sandbelts and home to picturesque, challenging courses that suit every ability.

About the International Federation of PGA Tours

The International Federation of PGA Tours was formed in 1996 by golf’s five world governing bodies – the European Tour, Japan Golf Tour Organization, PGA TOUR, PGA Tour of Australasia and Sunshine Tour (South Africa PGA Tour) with the purpose of providing a forum for the world’s professional golf organizations to discuss issues of mutual importance and, together, develop and promote the game of golf on a global basis.  As part of its mission, the Federation initiated the World Golf Championships in 1999.  The Asian Tour joined the International Federation of PGA Tours in November 1999.

About the International Golf Association

The International Golf Association (IGA) is a not-for-profit corporation, chartered in the State of New York in 1956.  IGA is governed by its six-member Board of Directors.  Jonathan Linen is the IGA Board Chairman.  Through its association with the International Federation of PGA Tours, IGA continues its international goodwill through golf mission and looks forward to the 2016 return of the World Cup of Golf to Melbourne and a new Sandbelt region course in historic Kingston Heath Golf Club.