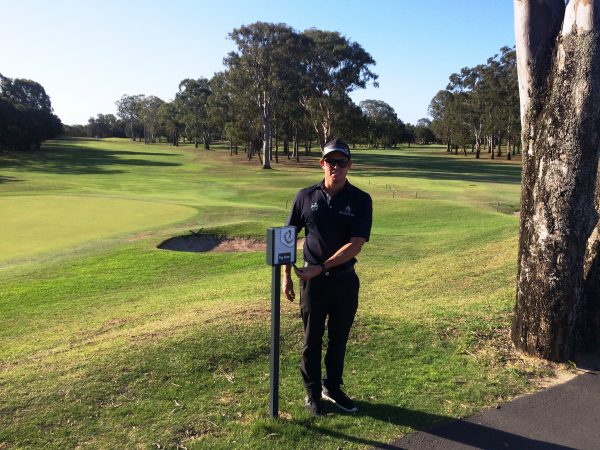 Redcliffe Golf Club, located within the Moreton Bay region 28 kilometres north-northeast of Brisbane’s CBD, has virtually solved its pace of play issue and it did it within a month of installing the GolfTag system – a pace-of-play monitoring device.

Since installing the Golf Tag system in July, Redcliffe GC, which attracts fields of up to 240 players, has shaved around 30 minutes from its Wednesday and Saturday competition rounds.

It’s certainly made club captain Glen Smith one of the happiest people in the club.

He’s delighted because he is no longer bombarded with the “what are you going to do about slow play” question from the members.

“We have now put the ‘what are you going to do about slow play’ question back on the members as they are responsible for pace of play for their group,” Smith said.

“In the first month of using this system our competition rounds came back to a more respectable last group time of 4:25 hours on stableford days and 4:40 hours for medal days.

“Previously this was 4:45 and five-plus hours.

“We believe there is room for improvement with early groups being expected to finish their round in less than four hours.

Redcliffe operates with six-minute start-time intervals and a one-tee start because the ninth hole doesn’t come back to the clubhouse.

There are four GolfTag stations on the golf course – at the first tee, the fifth green, the 12th tee and the 18th green.

It’s compulsory for all groups to carry a Radio Frequency Identification Tag in competitions rounds and it be swiped by a member of each group at each tag station.

Since the introduction of the GolfTag, it’s now easier for staff in the pro shop to keep tee times on track.

Players who take longer to play their round than expected receive a friendly warning letter reminding them to be conscious of the club’s pace-of-play policy.

“We have said that players cannot finish any more than five minutes behind the group in front,” Smith said.

“When we first introduced the system, we had one group finish nine minutes behind the group in front of them and another was 12 minutes behind.

“Even though they finished around the four-hour mark we still sent out a letter saying they had finished well behind the group in front.

“That’s because there were 24 groups in the field that were affected for the rest of the day because of their positioning in the field.

“If players can’t keep up with the expected pace of play we suggest they play later in the day.”

Still, it seems the introduction of the tag system has had a positive effect and changed members’ playing habits.

Now members are walking directly to their ball and playing ready golf.

“The feedback from members has been very supportive and positive,” Smith said.

“We are now looking to add more tee times to the field as it will generate additional revenue for the club.

“The tag system also guarantees players will finish their round with plenty of daylight left in the day.

“We are also hoping that we may pick up extra new members as it is much more enjoyable to play a quick round of golf in around the four-hour mark.”

Redcliffe’s aim is to have the final groups of the day finish their round in 4:20.

This can only be achieved if the early starting groups in the field keep up with the pace of play.

No one needs reminding that golf has always been about keeping up with the group in front, not staying in front of the group behind.

Smith says the tag system is saving the club paying a course marshal to monitor the field.

“Course marshalling was very expensive and proved ineffective,” he said. “This GolfTag system costs less than one year’s marshalling wages.

“And if we can get another two groups on the course on Wednesdays and Saturdays it will generate $10,000 to the bottom line,” he said.

The GolfTag system was first introduced at the Vines Resort Country Club in Perth in 2017.