How your putter influences your stroke mechanics 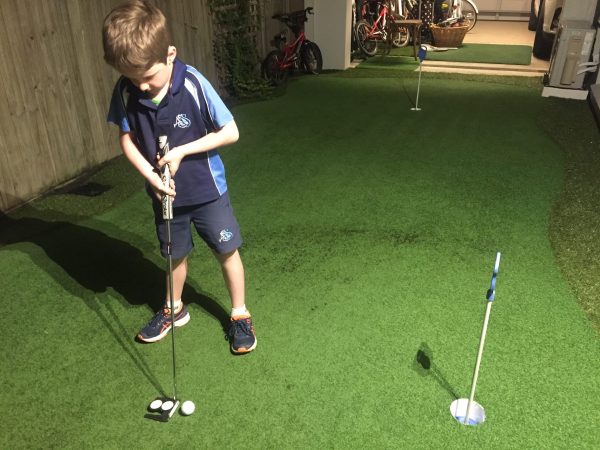 The characteristics of the putter that you use may have a strong influence on the type of putting stroke patterns that you develop. For example, if you took up the game as a kid and used hand-me-down clubs and a putter that was too long and too flat, that would lead to a set-up and posture that is built around the club. It should actually be the other way around, and clubs should be built to fit us. Imagine a child with a putter that is too long. They would stand a long way from the ball, with a posture that is probably too upright, with their eyes well inside the ball to target line.

These factors alone would probably lead to an overall stroke path that is very roundhouse with excessive rotation of the face. Add the head and eye position and it would probably be quite difficult to aim the putter accurately and consistently, making it hard to start the ball on line. The path being excessively arced with over-rotation of the face would mean a strong reliance on timing to square the face at impact.

Without a consistent ball location in the stance it would be very hard to get good results. Does this sound familiar? If a putter doesn’t fit for length, lie and loft then it doesn’t matter how old or experienced the player is, putting is going to be a constant challenge.

The thickness of the grip and the overall weight may also contribute to how successfully a player can use a putter. More head weight may mean that the ball comes off the putter face with a little more speed allowing the player to make a shorter and more efficient stroke which may increase consistency.
A thicker putter grip may lead to reduced hand and wrist action which can have a major effect on face rotation and control as well as improving the ball roll.  If a player’s wrist breaks down in the impact area more loft is effectively added to the face; if the loft angle is higher than the rise angle then backspin will be applied.  If the ball has backspin early in its movement there is more likelihood it will bounce off line. With topspin, the ball is more likely to roll better and stay online.

A golfer’s putting stroke can evolve, change slightly or stay the same according to the putter they use. The amount of toe hang or whether a putter is face-balanced or impact-balanced can have an effect on the player’s ability to have the face square to the arc throughout the stroke.  The line markings on the top of putters can be more prominent or longer than on others. For example, a mallet-style putter may have a number of alignment lines that make the putter look completely different to a classic blade or Anser-style putter.

The prominence of these line markings may make it much easier for a player to aim the putter face effectively at address compared to the no-line markings on a classic blade-style putter.

The Odyssey Two-Ball putter was a hugely successful product as it helped many players become more effective at aiming the face at address.

So if a player made a switch to a putter that suddenly improved their alignment at address, perhaps that would result in much improved putting results. However, what usually goes along with a mallet-style putter is a centre of gravity that is below the shaft axis point – called face balanced. This aspect could help or hurt the player.  A putter that is face balanced will have a tendency to rotate open less in the backstroke, and rotate closed less in the forward stroke. A heavy toe hang putter will almost do the opposite: it will tend to rotate open more in the backstroke and close more in the forward stroke.

This is where, as a player or an instructor advising a player, we should be trying to match up the face relative to the path. With the path of the putting stroke contributing just 17% to the starting direction it is far more important to have control of the face angle which has an 83% influence on start direction.

You may have heard that there are three types of putting stroke – straight, slight arc and strong arc. From my experience of using the SAM Puttlab, and the information sharing from the golf instruction community, I can safely say there are many more: the inside backswing, inside-out forward stroke, outside backswing, outside-in forward stroke, inside down-the-line, inside over-the-top, straight back, drop-under and inside-out forward swing. They can all be successful, it has to do with the relationship of the face to the path at the moment of impact. A player that has a face angle that is one degree to the right at impact and a path that is 4.5 degrees to the left will start the ball on line the same as the player who has the perfect stroke.

I do try to teach a technically perfect stroke, and I also try to minimise the amount of error in the face angle relative to the path during the entire stroke. This then helps to have the putter face return to the ball in a position that is perpendicular to the target line.

In my teaching, if I have done everything else technique-wise with a player to help them have good aim and alignment and good stroke mechanics and they still have a tendency to get the face closed to the path, I will certainly look at taking advantage of the type of balance the putter has. In this case I would trial a putter that has more toe hang.

With regard to the majority of handicap players who tend to have set up positions that promote an over rotating face with excessive arcing I would say that, in most cases, a face balanced putter would be suitable.

So back to the situation where a player has recently switched from a blade to a mallet-style, face-balanced putter with prominent alignment lines. This player would most likely immediately improve the alignment of the face at address purely because it is much easier to aim a tool like a putter with lines pointing directly at a target. Compare this to aiming a blade-style putter with no line markings or dots where you have to rely solely on aiming the face at right angles to the target, it’s no contest.

The player would probably start the ball on line much better due to aim at address and because of the face balancing which reduces rotation would probably also improve as the face would be closer to square to the path. However, over time, aspects of the stroke may start to change: the reduced face rotation in the forward swing may actually lead to an open face at impact and follow through. If the face is open at contact, the ball will be sent to the right (for a right-handed player). Once a player starts seeing the ball go to the right they will most likely compensate by having the path go to the left.

Alternatively the stroke characteristics could have changed the other way with the face becoming closed to the path in the backswing resulting in a face closed at impact. The stroke path would then start to go inside-out to compensate. So now the aim could start to change in order to fit the face on path and stroke path characteristics. If a player that has a tendency to get the face closed in the backstroke and return to the ball closed actually sets up square to their target the aim will look closed due to their mechanics. They will know that if they put their normal stroke on it with that face aim it will miss left (for a right-hander).  So players will also have their aim influenced by their stroke mechanics.

One lesson that long time players learn is don’t give or throw away your old putters, they can come   back into favouritism at any time.

There are a whole range of putters that can influence the face angle relative to the path. One of the best ways to get in-depth information on the suitability of certain putters and a player’s putting technique is to undergo a measurement on the SAM Puttlab. This system is recognised as the leading analysis technology for putting much the way Trackman is the undisputed leader in technical information on ball flight and the full swing. Puttlab uses ultrasound to accurately measure parameters such as aim at address and impact, stroke path, face rotation, face angle relative to path and also rhythm and timing. Measurements can be made comparing putters and it also has putter fitting software which can make recommendations on the ideal putter characteristics based on an individual’s stroke patterns. There are a number of facilities around Australia which use Puttlab for instruction and putter fitting purposes.

Mark Officer has been a PGA member for over 30 years and offers putting instruction services at www.perfectstroke.golf and at the Perfectstroke Golf Training Centre located on the Gold Coast, QLD.