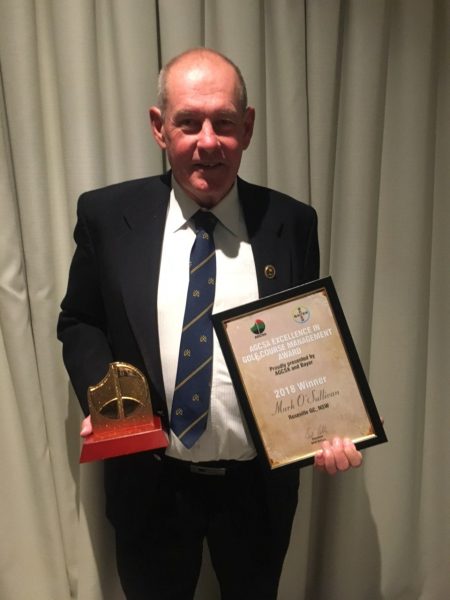 ANYONE who hasn’t played at Roseville Golf Club in Sydney’s north doesn’t know what they’re missing.

And long-serving course superintendent Mark O’Sullivan has been flat out keeping this private course to the standard that keeps members raving about it.

Actually not flat – but flat on his back.

O’Sullivan couldn’t attend an awards ceremony in New Zealand last month because he really was flat on his back…he had a knee replacement and couldn’t travel to the Shaky Isles to receive a well-deserved award for his efforts.

O’Sullivan was named the 2018 AGCSA Excellence in Golf Course Management Award, presented in partnership with Bayer.

He was one of four major AGCSA Award winners named on the opening night of the inaugural Australasian Turfgrass Conference held in Wellington, New Zealand.

The AGCSA Excellence in Golf Course Management Award is the association’s longest-running accolade dating back to 1990.

Since that first award, a veritable who’s who of the Australian superintendent profession have had their names etched onto the honour board, with O’Sullivan the 10th winner to hail from NSW. O’Sullivan was appointed course superintendent at Roseville in 1984 and since then has always strived to present the golf course at its very best for the members.

His lengthy tenure as superintendent at Roseville is a testament to the dedication and commitment he has made to the course during his career.

O’Sullivan’s commitment to excellence has been formally recognised over that period by his service as committee member on both the Greenkeepers Association and the NSW Golf Course Superintendents Association (NSWGCSA).

He has also been awarded the NSW Claude Crockford Environmental Award, the Pride in Workmanship from Rotary International and more recently the NSWGCSA Excellence in Turf Management Award.

He also recently hosted one of the NSWGCSA ‘walk and talk’ tours.

During his time as superintendent, O’Sullivan has trained and mentored many current superintendents nationally and has implemented many major projects which have consistently demonstrated excellence in golf course management.

These projects range from the installation of the first computerised irrigation system through to the construction of a 26-megalitre water storage dam.

He has also designed and reconstructed numerous greens, tees and bunkers and is a constant daily presence on the course, going out of his way to ensure the members are provided with the best possible playing conditions.

Ask anyone who has had the pleasure of playing his course and all will attest to the level of excellence that he aspires to on a daily basis.

‘Sully’ has even been known to rip off his shirt and jump into the dam to rescue members’ dogs.

No wonder he needed a new knee.