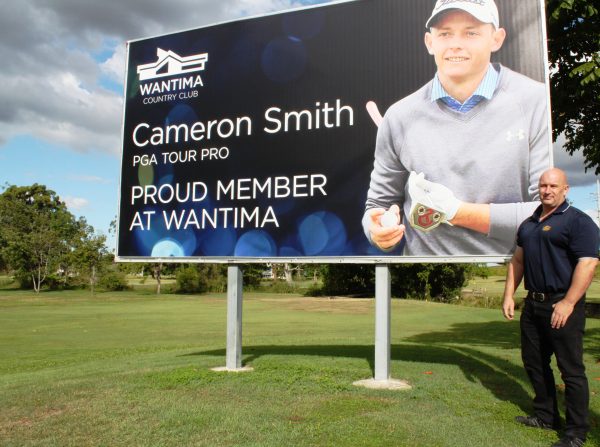 WANTIMA Country Club in Brisbane’s northern suburbs lives up to its reputation as being a family-friendly club and general manager Andy Lowen ensures his members and guests enjoy service with a smile.

As a three-year-old, Smith starting honing his skills around Wantima where his father Des still plays and is a former club champion.

“It’s great to have people like Cameron come through the system at Wantima,” Lowen said.

“Whenever he is back from playing the PGA Tour he comes out and plays in the comps and engages with the club’s juniors. It’s great for the club.”

Wantima is a vibrant, busy club and welcomes visitors with open arms.

Lowen, who has been at the helm for 15 months, is a former professional and a self-confessed golf fanatic.

Born in the UK, Lowen arrived in Australia in 2001 and ironically landed a job as a teaching professional at Wantima CC under then professional Chris Graham.

Unfortunately, back problems forced him to quit and he became interested in other areas of the golf industry.

“I went to work for Golf World and ran the golf operations at St Lucia Golf Links for seven years,” he said.

“It was a successful business and I was moved into head office as their national leader for buying and marketing.

“It was great experience, but I wanted to get back into the club environment and had a brief stint as golf operations manager at Pelican Waters before taking on the GM’s role at Nudgee College Golf Club for six years.”

A sea change took Lowen and his family to Bargara, a coastal town in the Bundaberg region.

“I was the general manager at the Bargara Golf Club for 13 months,” Lowen said.

“I think it was too early for a sea change because our hearts were in Brisbane so we came back and I got the job here at Wantima.”

Lowen says he has an undying passion for growing and building the game but, like all other sports, it is challenging at times.

“We have 1200 members, but we are currently on a membership drive to bring more families, women and juniors to the club,” he said.

“Wantima has always been a family-orientated club and I want to make sure that continues.

“We are a friendly and welcoming club. The atmosphere is great and new members don’t feel on the outer because there are plenty of opportunities to join the social groups within the club.”

Currently, Lowen is working closely with the club’s board and greenkeeping staff on a water management plan and on land tenure.

“We have challenges with water and land tenure, but that is being addressed,” Lowen said.

“The board is great about addressing the big ticket items rather than nit-picking on smaller issues.

“We also have strategies to continue course improvements for the benefit of the members and visitors,” he said.

“At the same time, we also want to make sure the members have other benefits like getting a good meal at the club rather than going to another venue,” he said.

“We are constantly required to provide the levels of services demanded by, and deserved by, our members and their guests.

“It’s important the club runs efficiently and for me to have a good relationship with the board, members and staff.

“For me, the best part of the job is the people at the club. I like seeing the members enjoying themselves.

“Of course, I’d like to be able to play more golf with the members, but due to my back issues it not always possible.”

So, how is Lowen’s game at the moment?

“I hardly play and definitely wouldn’t back myself,” he laughed.

“But it’s important to socialise with the members and I take every opportunity to do that.”

Away from the rigors of work, Lowen enjoys spending time with his wife Jo and young daughter Paige, watching soccer, particularly Arsenal, and rugby league.

“I also enjoy weight training and do it to keep myself strong, but my passion is golf and growing the game at Wantima,” Lowen said.

It’s a far cry from the cold nights he spent working 12-hour security shifts in England to supplement his income as a trainee pro at East Devon Golf Club.

“It was extremely cold and easily the worst job I’ve ever had.”