By Richard Fellner on December 3, 2013No Comments

Inside Golf was the first golf publication to review the new Big Bertha drivers, and we were absolutely blown away by the performance, feel and versatility of this sleek and powerful lady. Here’s what we found:

Like a feel-good love story where the forlorn hero—after years of pain and suffering—suddenly finds himself face-to-face with the lost-but-never-forgotten “love of his life”, so too will golfers around the world find themselves rekindling an old flame by the name of “Bertha”.

I remember it as if it were yesterday. It was 1991. Callaway had launched an innovative driver called “Big Bertha”.  This modern, sleek and highly radical golf club raised many an eyebrow when it was first launched.

Having played the relatively small, “old-school” persimmon drivers for most of my life, I was hesitant to “ask the new girl on a date”, but with a deep breath and a bit of wide-eyed curiosity, I summoned the courage and took her home.

That day changed my (golfing) life forever.  And I wasn’t alone, as golfers around the globe fell in love with Bertha. She proved to be the pin-up girl of a generation of golfers.

Callaway has been planning to bring the Big Bertha brand back for quite a while, but they have been patiently holding out…waiting for exactly the right technological breakthrough to do justice to this iconic brand.  To give the lady a homecoming that she richly deserves.

And it appears that they have done just that. With this morning’s announcement of the Big Bertha and Big Bertha Alpha, Callaway has introduced some amazing technology that is sure to be a game changer.

Inside Golf was the first golf publication to demo the new Big Bertha drivers, and we were absolutely blown away by the performance, feel and versatility of this sleek and powerful lady. Here’s what we found: 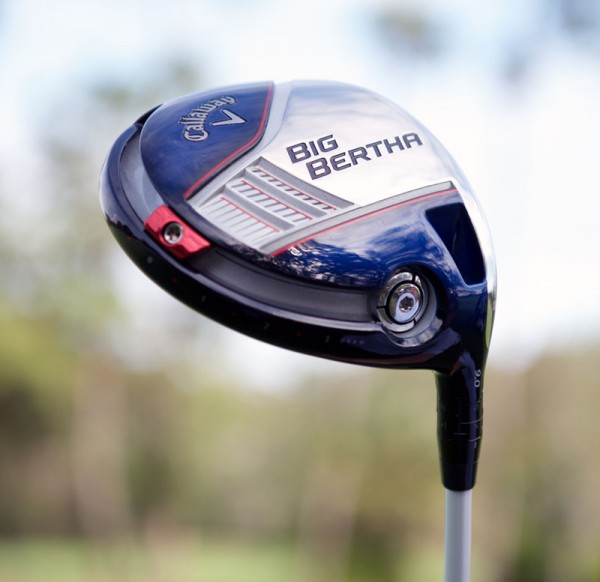 The Big Bertha Driver debuts the company’s Adjustable Perimeter Weighting technology, which features an 8g sliding weight that can be moved around the perimeter of the driver head to optimize shot shape and control dispersion. In addition, Big Bertha enables golfers to independently adjust loft and lie angle to help translate the added ball speed into more distance. Golfers can chose from four different lofts (from -1 to +2) to optimize launch angle and backspin and two different lies, denoted by ‘D’ for Draw and ‘N’ for Neutral, to optimize the directional bias. Together, these provide eight unique combinations that help golfers optimize their distance and dispersion.

The Big Bertha features a deep blue colour that was very pleasing at address. The overall balance and feel of the club was comfortable (and comforting), without any distractions or gimmicks.  The impact sound was a satisfying “Thwack”; not a trace of any tinny or ringing sound that has become common among some metal woods. 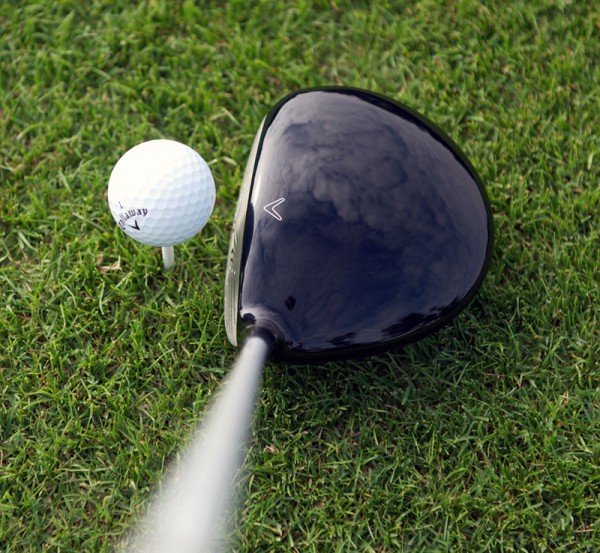 Impact with the ball felt solid, with just enough “spring” off the face.  In flight, our shots had a very consistent trajectory, and even our off-centre hits still managed to eke out plenty of control and distance. It is a very forgiving club, yet still has heaps of workability. And this is what will make it appealing to most golfers, as it gives the experienced player the ability to carefully shape their shots (without sacrificing distance), while the higher handicapper will benefit from plenty of distance and control, even when the impact is off centre.

The new Big Bertha is a brilliant, exciting club that will appeal to golfers of almost any level.  Be prepared to fall in love all over again. 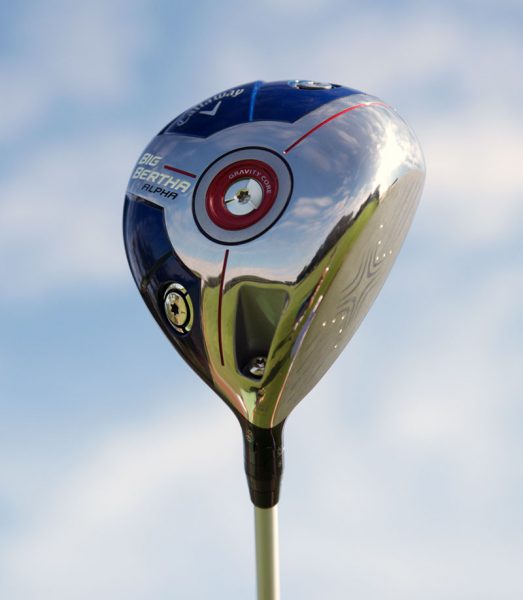 The Big Bertha Alpha features a revolutionary “Gravity Core” weight, which sits within the clubhead in a carbon tube that connects the crown and sole. Made of Tungsten, the Gravity Core insert is heavier on one end (10.5g) allowing the user to change the vertical CG and thus alter the spin rates. When the heavy end is closest to the sole, it will create a lower CG and lower backspin (for a flatter, more penetrating trajectory accompanied by more roll out.) When the heavy end is inserted first (closer to the crown), it creates more of a mid-CG position (for a more controlled and workable ball flight and less roll out.) Player testing has shown as much as a 600rpm spin differential between the two Gravity Core settings without a change in loft.

Big Bertha Alpha also enables golfers to make adjustments to CG bias, which helps influence the shot shape. Big Bertha Alpha has a screw port in the heel and toe of the body and comes with four interchangeable weights: 1g, 3g, 5g, and 7g.

This club felt a bit heavier than the Big Bertha standard driver, but this did not detract from the overall balance or feel. In truth, it felt great at address, and the added weight actually promoted a slightly slower takeaway, and more relaxed tempo.

Off the face, this driver really performed, launching the ball like a cannon. The low, penetrating ball flight ripped through the sky, and produced some amazing distance and roll. Like its sister driver, the “Thwack” sound was pleasing to the ear, while the springlike effect off the face was equally satisfying. As expected, our off-centre hits didn’t give us the same forgiveness of the sister club, but for those golfers who consistently smash it off the screws, this isn’t an issue.

With all of the weighting and adjustment options available on this club, it’s almost like the “Swiss Army Knife” of drivers.  For the golfer that likes to tinker with the technology, and customise every tiny aspect of their driver in order to maximise the performance, then Big Bertha Alpha is just the ticket.

A truly exceptional, innovative (and even a little bit sexy) driver that is sure to take its place in history among the game-changers of golf.

The new Big Bertha line also features a new fairway wood. With a thinner, lighter, more robust 455 carpenter steel face, the club offers more distance and playability. The New Advanced Adjustable Hosel Technology allows you to increase or decrease your loft (up to +2° or down -1°) and adjust Draw or Neutral bias, optimizing your launch, backspin and dialling in your preferred shot shape.  The Premium Mitsubishi Fubuki High Performance Shaft increases energy transfer, resulting in more ball speed while delivering higher launch for low spin, with a smooth, consistent feel

Both the Big Bertha and Big Bertha Alpha will be available on February 14, 2014 (Valentine’s Day, how appropriate for rekindling a love affair!)