KNOWN as the “monsters links”, Royal Lytham and St Annes, host of the 141st Open Championship from July 19-22, has provided plenty of drama down the years.

In 1958, a gatekeeper at Royal Lytham and St Annes failed to recognise Australian Peter Thomson, who already had three Open titles under his belt.

Wondering if Thomson was a player, official or spectator, the gateman asked: “What are you?”

The late Seve Ballesteros, the only man to win twice at Royal Lytham, excited the fans with his brilliance.

In 1979, he famously hit his tee shot into a car park on the 16th hole, but he still made a birdie and went on to win.

Nine years later (1988), Seve was back at Royal Lytham and he produced an Oscar-winning performance when he out-duelled two Nicks – Price and Faldo.

Seve, the matador, hit some booming drives, flashy iron shots and putts that just kept finding the bottom of the cup.

The roar that went up when Seve played a magical greenside chip to edge out Nick Price reverberated for miles.

Of course, Royal Lytham and St Annes has provided plenty of other great moments from the history of golf’s oldest championship.

In 1974, Gary Player’s ball came to rest up against the Victorian clubhouse wall forcing the South African to putt left-handed, which he did brilliantly to win the title.

And who will ever forget when, in 2001, Welshman Ian Woosman, who was in a share of the lead received a two-stroke penalty for having too many clubs in his bag. The mistake cost Woosie £225,000 and possibly the Open title. It also cost his caddie £20,000 and his job.

He still managed to shoot a final round 71, but laid-back American David Duval lifted the claret jug.

As an amateur in 1926, Bobby Jones captured the first Open at Royal Lytham and St Annes.

There’s a plaque close to the spot on the 17th where he hit his second shot onto the green from a rough, sandy lie in the final round. The mashie he used to hit the shot is displayed in the clubhouse.

Bob Charles put New Zealand on the golfing map when he won at Royal Lytham and St Annes in 1963.

Brit Tony Jacklin won there in 1969 and South African Bobby Locke was successful in 1952.

The golf course is extremely tough – only Carnoustie on the Open rota is thought to be tougher.

In fact, Bernard Darwin describes the challenges in his book, The Golf Courses of the British Isles: “The trouble, besides the rough grass and pot bunkers, consists of sand-hills, both natural and artificial.

“To build an artificial sand-hill is no light task and it is characteristic of the whole-hearted enthusiasm of the golfers of St Anne’s that they have raised several of these terrifying monuments of industry.” Darwin penned that in 1910.

The greens are firm and fast, or as Darwin once said when playing a match there against a competent putter: “The truly-struck putt comes on and on over that wonderfully smooth turf and flops into the hole with a sickening little thud and there we are left gasping and robbed of our prey.”

Royal Lytham and St Annes is unique because it starts with a par-3 – the only venue on the Open Championship circuit to do so.

In 2001, Woosnam hit a magnificent tee shot at the 206-yard hole and drained the putt for birdie – or so he thought. That’s when he discovered he had 15 clubs in the bag and was penalised.

The only holes that have not been changed are the par-4 fourth and par-3 12th.

The other challenge for the players is there are more than 200 bunkers to negotiate.

Another major change is spectators can bring their mobile phones to the course.

The Royal and Ancient first banned mobile phones in 2007, but this year will adopt more relaxed rules with designated sites where fans can use them.

This year, 13 Australians (as of press time) will attempt to dial in a win – Robert Allenby, Aaron Baddeley, Nick Cullen, Greg Chalmers, Marcus Fraser, Marc Leishman, Ashley Hall, Brendan Jones, Brad Kennedy, Geoff Ogilvy, Adam Scott, John Senden and Aaron Townsend. Will one of them become just the fifth Aussie in history to grab Open Championship glory? As usual, it is anyone’s guess who will lift the Claret Jug in the end, but one thing is for certain, they will need to play their absolute best to conquer the Monster Links of Royal Lytham and St Annes. 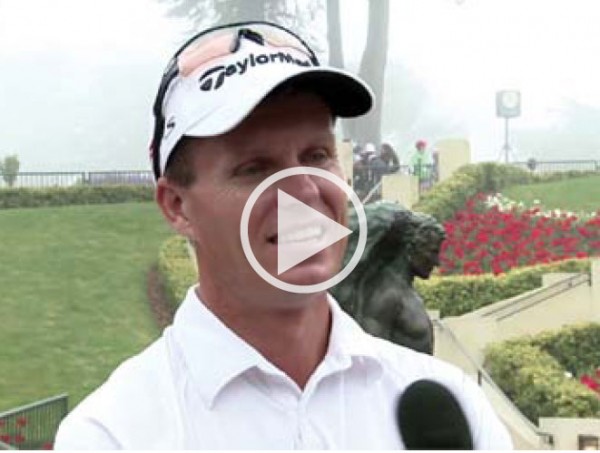 WE recently caught up with top Aussie ballstriker John Senden and discussed his chances at the upcoming Open Championship to be played this month at Royal Lytham and St Annes.

“My game is in good shape,” Senden says. “The British Open golf suits me: good ballstriking and the bouncy courses helps me out. I’ve never played Royal Lytham before, so I’m looking forward to going there and challenging the best players in the world. If I play really well, keep playing my own game, keep on believing in myself, I’m hopefully a chance.”

Senden, who finished as the top Australian(T10) at the recent US Open, is one of the best ballstrikers on tour, and has been rocketing up the leaderboards lately, as well as the World Golf rankings, due to solid, consistent play.

“I’m really enjoying the game of golf right now, and I’m playing my best. I feel like I need to keep believing, keep building the belief and I feel like there is still fire in the belly to go out there and win these golf tournaments.” •

View the video here of JohnSenden

FOOTNOTE 1: Peter Thomson had to survive a 36-hole playoff to win the Open Championship at Royal Lytham and St Annes in 1958. Thomson and Welshman Dave Thomas finished the 72 holes regulation tied on 278. Next day, they played off and Thomson triumphed after carding 68-71 – 139 to Thomas’ 69-74 – 143.

FOOTNOTE 2: Going into the final round of The Open at Royal Lytham and St Annes in 1969, Briton Tony Jacklin found a note from friend and fellow professional Bert Yancey on his locker. The note contained one word – “tempo”. Jacklin held his nerve – and tempo – to become the first Englishman to win The Open in 18 years.

THE OPEN – BY THE NUMBERS

1 left-hander has won The Open Championship – Kiwi Bob Charles in 1963.

4 is the number of successive victories by Tom Morris Jr (1868-1872). There was no championship in 1871. Four Aussies have won the Open – Peter Thomson, Kel Nagle, Greg Norman and Ian Baker-Finch.

13 countries can claim at least one of their players has won an Open – the US, Scotland, England, Australia, South Africa, Jersey, Spain, Ireland, Northern Ireland, Argentina, France, New Zealand and Zimbabwe.

14 years old was The Open’s youngest competitor, Tom Morris Jr, in 1865.
30 pounds ($48) is the price of a ticket to enter Royal Lytham and St Annes on Wednesday’s practice day.

34 Americans, more than any other country, will make it to the first tee for this year’s Open Championship. South Africa is next with 11. Australia has 10.

41 – Scotland and the United States share the most number of Open victories, 41 by each country. The US has had 26 different winners and Scotland 22.

46 is the record number of times Gary Player has contested The Open.

79 is the number of days Royal Lytham and St Annes is closed to the public prior to The Open.

123 yards (112m) is the shortest hole in Open history – the eighth hole at Royal Troon.

250 pounds ($400) is the cost of a reserved grandstand seat at the 18th green. This does not include the entry fee.

267 is the record winning total in The Open’s history set by Greg Norman in 1993.

1860 was the year The Open Championship was first played.