While the Australian Golf Handicapping system has undergone many changes recently, the announced delay of introducing the Slope system until 2013 has caused much distress among our readers, especially those who believe that Slope will be the “unifying” cure-all factor to fix the remaining issues surrounding handicaps.

Many of the letters we receive each week argue (nay, demand) that Slope should be introduced as a priority because it will “have a significant impact on Australian golf.”

But will Slope truly have a marked effect on your handicap? In many cases, the answer is no.

To put it simply, Slope is merely an adjustment factor to make your handicap ‘portable’ from one course to another. It adds or subtracts strokes to your handicap, based upon the Course Rating at each course.

For example, if your handicap is 15, then under the old system you would play at a 15 at any course, regardless of its level of difficulty. In the Slope system, however, your 15 would be converted to a “course handicap” based on the difficulty of the course. Slope ratings can range from 55 (easiest) to 155 (most difficult), with 113 being the neutral rating where your handicap won’t change at all. So on a local/easy track, your 15 handicap for the day may be, say, a 12, while on a monster it could be a 20 or higher.

So, for golfers/club members who play all their golf on the same course, Slope will have no effect on your regular rounds – but it may come into effect if you play a comp or casual round at another course which has a different course rating than your home course.

Social golfers who play at a different course each day/week/month, on the other hand, may have a different handicap each time they play (depending on the difficulty of the courses they play – if all the courses are of a similar course rating, then there will be little or no change in handicap.)

“The new GA Handicap System will be made up of a whole series of components of which Slope will be just one,” says Golf Australia’s rules and handicapping manager Simon Magdulski. “It is also worth making the point that whilst Slope will not have a significant impact on the regular experience of most Australian handicap golfers, it will still be a terrific addition to our handicap system.  Our statistics suggest that approximately 90% of the rounds that are processed through GOLF Link, are played at the home course.  Of the remaining 10%, a reasonable proportion will be on away courses with like-Slope ratings.

“Slope wouldn’t have solved the high-marker bias we were encountering with the previous ‘10 of 20, 0.96’ settings. What Slope will do is, where you’ve got people from low Slope-rated course going to play on high Slope-rated courses, it will give them a fairer handicap. That’s not something across the golfing population that happens a huge amount, but it certainly does happen, and it is very important to those affected.  In some cases currently, players end up with a handicap they find to be largely irrelevant to their standard of play on difficult courses, and that’s not a great outcome.  So it will be a very useful addition to handicap golf in Australia.”

So how will Slope work?

Under Slope, every set of tees on every golf course will have both a Scratch Rating and a Slope Rating. The Scratch Rating is the number of strokes a Scratch marker (ie a player with a handicap of 0) is expected to have. The Slope Rating indicates how much harder or easier the course will play for a player who is not a Scratch Marker.  GOLF Link will calculate a central handicap for every player. This will be called the GA Handicap. Golfers will be able to directly compare their GA Handicaps with one another, no matter where they play their golf.

Golfers will be given access to charts (Slope Tables) that they can use to quickly convert their handicap for each Course.  Upon arriving at a new course, a golfer would simply consult the chart/table to find their course handicap for the day.

The charts below are a very basic example of how a Slope Conversion Chart may look.

(Note: These numbers are an approximation only, and do NOT represent the actual numbers once the system is rolled out.) 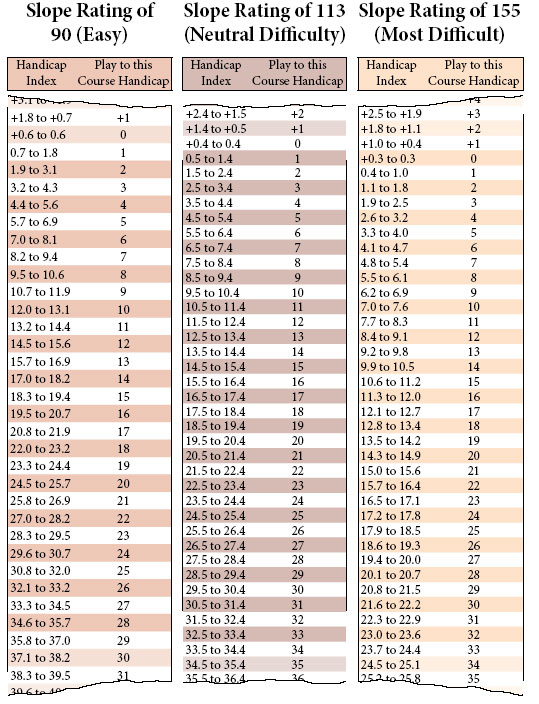 As you can see from the three scenario charts, there is a huge variance in course handicaps depending on the difficulty of the courses.  (Note that these charts are just three examples from around 100 ratings possibilities.)

So while Slope will certainly add tremendous value to Australian golf – and will be a ray of sunshine for social/travelling/wandering golfers — it does not represent the cure-all solution that many club golfers are expecting it to be.  Either way, it is an extremely fair and solid factor that will go a long way to improving our enjoyment of golf.

17 Responses to "A Slippery Slope: How will the Slope System affect your handicap?"