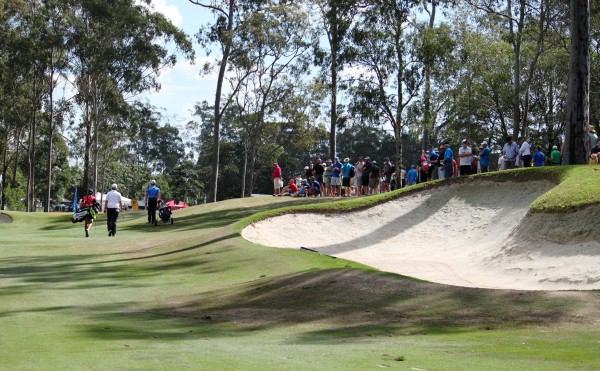 GEEZ, there were a lot of positives to come out of the Isuzu Queensland Open at Brookwater Golf Club, according to Golf Queensland manager golf operations Luke Bates.

He told Inside Golf crowds were up 40 per cent on last year and more than 2000 schoolchildren were introduced to the game.

“We doubled the numbers,” he said. “Last year we had about 1000 kids and this year 2000 kids from the Ipswich community.

“Then we had 300 kids come to our activity centre on the weekend of the tournament, which is three times more than last year.

“We achieved many of our KPIs (key performance indicators) we set as far as spectators, media coverage and things like that were concerned.

“It’s certainly been a success for us with growth across many of these areas.”

With crowd number up, particularly on the weekend, more volunteers had to be “roped in” to provide safe passage for the players.

“We did have to get some extra marshals out around the leading groups to help the players get through tunnels and things like that,” Bates said.

For the record, 50 volunteers were needed – 36 from the public and 14 rules officials.

That wasn’t enough and is something Golf Queensland will look to grow next year.

“We had plans to do hole-by-hole scoring for each group, but we just didn’t have the volunteers,” Bates said.

“We will have a chat with those who did volunteer and look at ways we can entice others to get involved.

“Is it that the club members aren’t aware of it?” he asked. “Do we have to change our communication strategy or are they aware of it, but need better enticements?

“I ran to Charlie Earp at the 19th hole and he suggested golf clubs could play a bigger part in promoting the tournament.

“A couple of months before the Queensland Open, club captains should be mentioning it at club presentations and urging members to attend,” he said.

Anyway, this year there was a buzz on the fairways and around the greens, especially with Cameron Smith’s fan base.

Every time Smith, who tied for third, saved par or made a birdie a loud cheer went up.

“He has brought all his mates along,” Smith’s father Des told me as we approached the ninth green on the final day.

One of the nice things about the Qld Open is officials allow the gallery to walk the fairways. That allows them to listen in to players and caddies discussing an approach shot.

“We had some concerns about noise and how the players would react especially with kids around,” Bates said. “But we spoke to the players afterwards and there wasn’t a negative comment. It’s all very positive with that type of interaction.”

If Dodt, who hails from Gatton, provided the theatre on Sunday, Michael Wright provided it on the Friday.

Needing a couple of birdies to make the cut, Wright pulled a six-iron from his bag on the 169m 16th and watched his ball land 5cm from the cup and drop in.

He walked away with $10,000 he didn’t have when he teed it up on the hole. The eagle certainly landed for Wright. It was his ninth career ace.

Kiwi Michael Long aced the fifth hole during the pro-am while South Australia’s Tom Bond went within a whisker of snaring $50,000 on Saturday when his tee shot on the seventh landed inches from the cup.

FOOTNOTE: It took Luke Bakes four days to find his way back to Golf Queensland’s office.

“I just got back to the office on Thursday,” he said. “We had to clean up on Monday and Tuesday and on Wednesday we took the 70 pull buggies we borrowed from Indooroopilly, Keperra, Nudgee, Royal Queensland and Arundel Hills back to those clubs in the Isuzu trucks.”

Planning has already started for next year’s Isuzu Queensland Open.