NSW Senior Open set to stay at Thurgoona until 2022 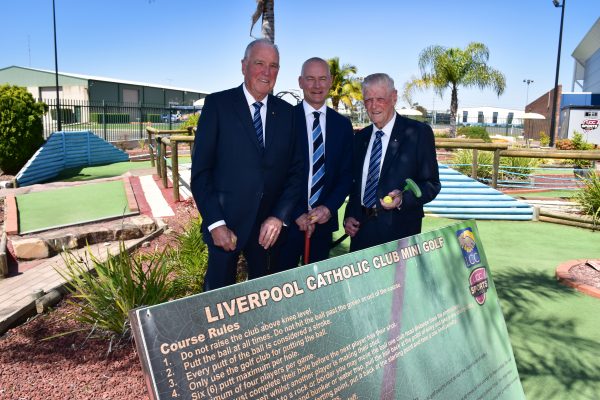 With a purse of $120,000 this year, an increase of $20,000 on last year’s prize fund, the NSW Senior Open Golf Championship is the richest event of its type in Australia and New Zealand.

“It’s just fantastic to have the event for six years at the one venue in regional NSW,” Mr Fraser said. “The support we get from Liverpool Catholic Club and Albury City Council is fantastic from a financial perspective, but there is also support from the general community who want to see the greats of the game all in one spot.”

Albury locals, visitors and club members alike will get to see some great golf action during this year’s three-day tournament, from October 25-27, which attracts many of the legends of Australian Professional golf.

Some of the stars set to compete at Thurgoona this year include Peter Senior, Peter Lonard, Craig Parry Rodger Davis. Also returning to Thurgoona to defend his 2018 title is Perth-based Kiwi, Michael Long.

“The Seniors Tour is growing in Australia. This is the largest event prizemoney-wise on the Ladbrokes Legends Tour by quite some way, and we look forward to working with the Liverpool Catholic Club to continue to grow the event,” Mr Fraser said.

Thurgoona Country Club Resort amalgamated with Liverpool Catholic Club in 2002 and now boasts about 10,000 members. Acknowledged as one of the best courses in regional Australia, with the efforts of the club’s wonderful greenskeepers, the course will be at its best when tournament week rolls around.

In addition to the work of the fantastic Thurgoona Country Club staff, around 90 club members volunteer each year, manning the fairways and rubbing shoulders with the stars for the duration of the championship.

Continued sponsorship of the NSW Senior Open is a boon for the Thurgoona club, which will host up to a thousand or more spectators throughout the event.

“We’ve got the only three-day tournament for Seniors,” Mr Coffey said. “Everything else they play is a Pro-Am. I think that’s a massive attraction.”

The benefits do not end at boosting regional tourism and watching golfing greats either. There will be pro-hosted Masterclasses, and also a juniors clinic. Golf NSW High-Performance Manager Khan Pullen will be attending, and the region’s rising teenage stars can come along to discuss their game and get advice about the sport’s elite player pathways on the first afternoon of the event.

“This is critical for getting golf clubs in kids’ hands, and the more kids are playing the game, the better we’re going to do as a sport on the international stage,” Mr Fraser said.

A highlight of the week is also the tournament-opening An Evening with the Pros, on the Wednesday evening before the first day’s play on Friday. This year’s big night will be hosted by former cricketer Merv Hughes and feature Rodger Davis, Peter Lonard, Mike Harwood and more. Tickets always sell fast.

“It’s a fantastic opportunity for people in the local area and our local members to watch some of our golfing greats play their home course.

“Our members queue up to volunteer excited by the opportunity to rub shoulders with some of the world’s best and see players of this calibre on their home course.

“It is the richest tournament on the calendar, and the pros are always asking, ‘Are we coming back again next year,” says Mr Fraser.