Inside Golf Australia’s popular golf course reviews by golf writers, golf professionals and the average Australian golfer. We travel all around Australia to review your favourite public golf courses and private golf clubs.

By Richard Fellner on May 12, 2015 Comments Off on Club of the month: Rossdale Golf Club rossdale

Widely regarded as “Melbourne’s Friendliest Golf Club”, Rossdale Golf Club is located in the south-eastern suburb of Aspendale.  The course sits firmly within the hearts of its members, who adore its open and friendly atmosphere. The bayside course weaves through corridors of pines, eucalyptus and coastal banksias that make finding the fairway more difficult than […]

Castle Hill Country Club in Sydney’s population-booming north-west region in recent years has been surfing a surge of success which has provided it with a winning profile that few golf clubs in Australia currently could boast. However once you meet Castle Hill’s General Manager Melissa Ellis—enjoying her third year at the club despite coming […]

By Richard Fellner on February 24, 2015 Comments Off on Club of the month: Flinders Golf Club flinders

Just a short drive to the east side of the famed Mornington Peninsula is the lovely and picturesque Flinders Golf Club, an 18-hole seaside beauty built along an amazing stretch of land overlooking Bass Strait. While I’ve played heaps of golf on the Peninsula, Flinders has always held a special place in my heart. Though […]

By David Newbery on December 20, 2014 Comments Off on Club of the Month: McLeod Country Golf Club

LOCALS boast that McLeod Country Golf Club is in the peak of condition and the best it has been for years. In fact, all areas of the club have been greatly improved in its recovery from the 2011 floods and 2012 storms. Members and guests are so impressed with the conditions at McLeod that they […]

The beauty of Peregian Springs

PACIFIC Golf Club in Brisbane’s southeast is one of those feel-good stories. “Things have been on the up-and-up ever since we put in place better processes,” said the club’s general manager Cameron Harvey. A new course superintendent, course improvements and renovations, a beautification program and changes to the catering department have given the popular club […]

Inside Golf’s DAVID NEWBERY ventured off-the-beaten-track and discovered a nine-hole golf course where serenity rules even at Death Valley, Pinball Alley and the Bermuda Triangle IT’S 8.25 on a heavenly Wednesday morning when I drive into Tabulam Golf Club’s car park and pull into a parking spot just metres from the “clubhouse”. Well, truth be […]

By Inside Golf on February 24, 2014 Comments Off on Golf on the Murray: Albury Commercial Golf Resort albury

With a charming mix of country life and a modern city, Albury‘s Commercial Golf Resort offers visitors superb golf courses featuring wonderful greens that are regarded as the best in country NSW. Championship and casual golfers will be challenged along the picturesque tree-lined fairways and well-placed bunkers. The panoramic views and immaculate courses will ensure […]

Eastern Golf Club on the rise

By Richard Fellner on September 9, 2013 No Comment Eastern Golf Club

With origins dating back to 1896, The Eastern Golf Club in Melbourne has a rich and treasured history.  From their early days in Mont Albert (with a railway station as their original clubhouse) through their transitional periods that saw their history intertwine with both the Box Hill and Huntingdale Golf Clubs, the club has grown […]

Golf on the Murray: Barham

By Inside Golf on July 5, 2013 No Comment golf courses, murray river

A great place for that well earned vacation or just a weekend away, Barham is an idyllic paradise located on the Banks of the Mighty Murray River. Situated between Swan Hill & Echuca, Barham is a leisurely three-hour drive north of Melbourne.

By Inside Golf on June 25, 2013 No Comment golf travel, murray river

By Inside Golf on February 2, 2013 No Comment mid-north coast, nsw

In terms of scenic beauty, the Mid-North Coast and the Northern Rivers of New South Wales are unsurpassed. And when it comes to golf, this stretch of NSW manages to combine the attraction of a resort golf destination with the charm of friendly local clubs.

New Zealand’s Kauri Cliffs and Cape Kidnappers golf courses are hugely popular with golfers the world over, but there are a number of other must-play gems in the land of the Long White Cloud, writes DAVID NEWBERY

With 196 years of history, and friendly locals, Toowoomba is a destination golf fanatics and non-golfers alike should explore, writes DAVID NEWBERY

A world away from the hustle and bustle of Australia, a visit to Norfolk Island is like stepping back in time. A journey to the quintessential ‘Small Town Australia’ and the simple, honest and organic way of life. Plus, there is some fantastic island golf!

For golfers travelling to New Zealand’s rugged North Island, the beautiful and ultra-playable Kauri Cliffs should be top of the list. This month, we review this magnificent course — including a hole-by-hole photo gallery.

Your guide to Corporate Golf venues in Australia

By Richard Fellner on April 26, 2012 No Comment corporate, featured, reviews

Corporate Golf events are still one of the best ways to reward loyal clients, engage with potential clients, or simply have a fun day out with employees and colleagues. As golf is one of Australia’s highest participant sports, it’s a good bet that the majority of your business contacts will include some golf lovers. And […]

Rated by many as among the top golf layouts in the world, the Cape Kidnappers golf course offers a combination of breathtaking scenery and world-class golf like no other.  Inside Golf ventured to this unique kiwi destination to experience this beauty for ourselves. “Is it normally this windy here?” I asked, holding onto my cap, […]

Back to Tassie and loving Launceston

From the magnificent Country Club Tasmania in Launceston, a facility that also features a well-groomed championship golf course and a boutique casino amongst other special features, to the highly rated Barnbougle Dunes and Lost Farm, my three-day tour has me wanting to book my next visit – and it’s certain it won’t take another 25 years for that to happen.

Just a short drive north of Melbourne, The Craigieburn Sporting Club is a great place for a bit of golfing fun.

Be a Course Reviewer

Announcing: The Inside Golf “Carpark to the 19th” Course Experience Ratings Historically, golf course rankings have been written by golf pros, journalists, course architects and industry professionals. The ratings have been based on features like design, condition, length, number of hazards, etc, with sometimes a hint at the “Wow Factor”. And while these rankings are […]

On a recent trip to the ACT, we were fortunate enough to have a quick play on this enjoyable track. This 6300-metre par-72 championship layout is certainly one of the more enjoyable inland courses in the area, and requires solid ballstriking if you want to do well. Designed by James Herd Scott in 1954, the […] 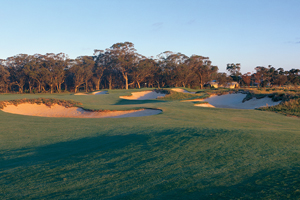 While Victoria’s best golf courses are generally found in Melbourne’s Sandbelt or along the Mornington Peninsula, a new course in Melbourne’s outer west, Eynesbury, is beginning to turn some heads in the social golfing community. The recent host of the Victorian Social Golf Club Championships (VSGCC), Eynesbury’s course and homestead offer an endearing combination of […]

Great golf in Victoria isn’t limited to the Mornington Peninsula or the Sandbelt. A short trip down the famed Surf Coast offers a variety of challenging and picturesque seaside courses that offer a true test of golf. The Stuart Appleby-designed Sands Torquay is one of these courses. Though still a relatively young course, it has […]

In June 2009, the Croydon Golf Club packed up and moved from their long-time residence at Dorset Road to their shiny new home in the Yarra Valley. Featuring an impressive 27-hole Ross Watson-designed course, a 15 hectare walnut grove and a modern clubhouse with all the amenities, the new facility is certain to grow into one of Melbourne’s premier courses.