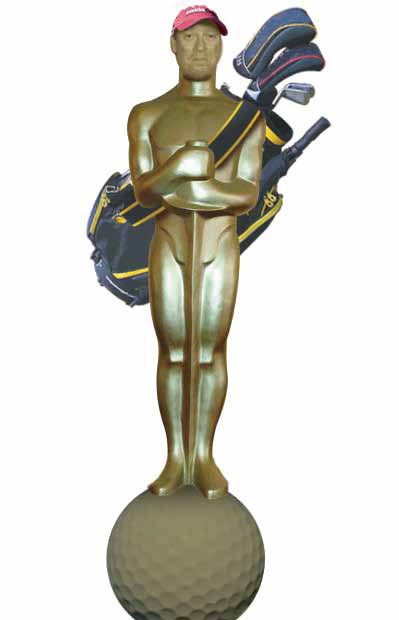 As you are probably aware, “The Larrys” have been awarded to some seriously significant golfing luminaries since they were created all those years ago. “Just how long ago?” I hear you ask.

“Damn fine question”, I hear me say. They actually date back to 1497 when my ancestor “Prince Larry the Impaler” used to cut the heads off his vanquished enemies and belt them around the castle with a branch from a tree. Although the facts are a little sketchy, some historians believe the big guy created the first weekly competitions between all the local conquerors.

As you can imagine, unless you wanted to have your melon belted across the field in the following Saturday’s Monthly Medal, you would let the Prince win. For the rest of the field, there was, of course, the “head run-down” allocated at the presentations. (… “And the last head on a countback goes to Ivan the Slicer with 35 points”). The Impaler ended the season with his annual awards, which he again dominated, so from such humble beginnings, arose one of Golf’s most respected awards ….. “The Larrys”.

First award for 2016 goes to the Player with the biggest display of Asthma coming down the stretch. Nominees are:  Lee Westwood, picked as a “Wild Card” for the Ryder Cup by his good mate Darren Clarke but,unfortunately, took the term “Wild” literally. There are 50 states in the USA and Lee’s golf ball landed in at least 30 of them that week.

Another crowd favourite, Ernie Els, has made some clutch putts over his career but the clutch pedal had worn out as he nudged his 6th putt into the edge of the hole on the first green at Augusta.

Both worthy nominees, but the winner of “The Larry” is Jordan Spieth! Usually Spiethy has nerves of titanium but on Sunday at Augusta he was seen unexpectedly reaching for the Ventolin. With a two- shot lead Spiethy pushed his iron shot into the water on the 12th. OK, that’s not the first time this evil little hole has done that to a leader but it was the resulting chunked pitch shot, which removed most of the drop zone that stunned the world. Apparently the divot, with the ball still sitting on top, remains floating in Rae’s Creek today.

A conversation I had down at Mittagong Green Grocery with the owner, Russell Sprout, reminded me of one my favourite award categories – The “Larrys” for the funkiest name.

If it hadn’t been for some extraordinarily bad breaks over the entire season, Ireland’s Daniel Rawluk could have easily won on the European Challenge Tour this year.

One player on the Korean LPGA tour had a simple answer as to why she had such a disappointing year. “I was trying to play more aggressive golf but when I attempted to put the foot down nothing happened” explained Ka In Park.

This year’s winner was India’s Shankar Das who recently he had a good finish in the New Delhi Open. It could have been a lot better had it not been for a bad finish. Shankar left himself with a wedge shot to the final green off a side hill lie. He had to take an unplayable.

I’ve created a new “Larry” for 2016, (my wife Sandra will be beside herself with excitement). It’s awarded to the person whom I most enjoyed watching win a major.

There were some serious contenders for this puppy including Jimmy Walker whose ball striking totally deserves to be endowed with his first major. The tall Yank has been easily the most underrated and for that matter, understated competitor on the U.S. PGA Tour for the past 3 or 4 years. He’s quiet, unassuming and is completely void of any angry spurts. This makes him about as interesting as me taking a drop out of GUR.

Henrik Stenson has had an extraordinary career but up until July 2016, didn’t have a major trophy on his Swedish mantelpiece. That all changed at Royal Troon, in style!

Dustin Johnson apparently has more talent than Bolt, Bradman, Jordan, Ali and my Dad, Arthur Canning. I’m basing Arthur’s inclusion on this list on what he tells us every Christmas when he has his largest and most receptive audience. Dusty’s U.S. Open win has been coming since he burst onto the scene in the same event at Pebble Beach in 2010.

The winner of “The Larry” goes to Danny Willett for showing some extremely large Srixon Z Stars by defeating the best in the game over four long days at Augusta. The most disrespective and ignorant pieces of journalism I’ve read was by a jerk named Evan Hilbert and it was published by CBS Sports. This wanker came up with “The worst Golfers to win a major”. I’m not going to acknowledge this bloke’s work by naming any of the champions on his list but I suspect Danny may become fodder for his next piece of…. “poo”. As a proud Aussie I love an underdog and anyone who can survive 72 holes of gut-wrenching, life-changing pressure, while being watched by around 50 million TV viewers has deserved his Major!

Finally, I mentioned my Dad earlier…. Well, behind every great Arthur there is a Madge and this special pair are about to celebrate their 70th wedding anniversary!

That’s worth a “Larry” don’t you think?