By Richard Fellner on January 11, 2011No Comments 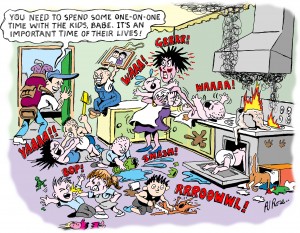 No great Boys Weekend would be possible without wrangling a leave pass from the better half. Here are a selection of stories, compromises and “little white lies” that have been submitted to us at Inside Golf. The names have been changed to protect the truly guilty.

The “Slight distortion of the truth” strategy:

The Pitch: “tee off is around 8am, honey, so with 4 hrs for the round I should be home early enough that we can still spend most of the day shopping together.”
The Reality: tee off 8:57am, 5hr round due to typical slow play, 1 hr for the 19th hole & presentations, 45 min drive = home in time for dinner and the footy replay.
Submitted by “Sergio”

The old “Say nothing and it will be ok” ploy:
Some years back while in California, 4 of us drove several hours to play golf in the Sacramento area. This was supposedly a “one day” golf outing. Upon arriving at the course, a terrible rainstorm forced the course to close. What were we to do? As we were only minutes from a large airport, we decided to fly to Las Vegas, as we heard that it was sunny there. On the third day, I finally had to call my soon to be ex-wife to tell her not to worry, that I was still alive, but didn’t have enough money for a plane trip home. Exactly 6 days later, I returned home to find my suitcases packed and sitting by the front door. The good news was that everything that happened in Vegas stayed there.
Submitted by “Ernie”

The “I’m SURE we discussed this” gambit
Last year I inadvertently agreed to attending a 4-day golf trip with the boys. Little did I realise at the time that it clashed with my 10-year wedding anniversary (ouch). Not knowing how to broach the subject with the wife, I left it as late as possible and then tried the old “I’m sure we discussed this and you agreed it was OK, it was booked 8 months ago” etc. but there was more chance of me shooting 59 than getting this past her. Being possibly the most accommodating female on the entire planet she begrudgingly agreed (seeing as I’d already forked out the cash) but said that I’d have to make it up to her in a big way. Luckily one of the boys on the trip was the publican at our local who also happened to know the local florist quite well, so I organised through him to get a bottle of French champers and a huge bunch of flowers delivered to her by horse & carriage drawn by 6 white stallions (OK, via the pub delivery boy but what’s the difference?) – and do you think that got me out of the sh#t??? NO CHANCE. I was punished for the next week and the credit card copped a pounding as she elected for some “retail therapy”. Suffice to say I will be checking my calendar more carefully next time!

The “Yes, I would almost go that far for a round” manoeuvre
I once double booked a golf weekend on the same night as a night out with the wife and friends to see a show (which I had booked myself). The wife was digging her heels in hard. Knowing that she wants another child more than anything, I came dangerously close to saying “yes” to her wish. Thank God she came to her senses (she saw how much the golf weekend meant to me) and granted the leave pass before I had to go that far.
Submitted by “Lee”

The all-time classics:
I’ll have the kids next weekend…
I really need to catch up with the boys to see how they are handling fatherhood…
I’ll make it up to you babe in more ways than one…if you know what I mean…
This is a serious golf event, babe, with very little drinking going on…I’ll behave for sure….
You won’t believe it but a client of mine is going on the trip so we can talk heaps of business…my boss wants me to go
You need to spend some one-on-one time with the kids, babe, it’s’ an important time of their lives…
I’m going for a prostate check, it could take a while, I’ll probably need a second opinion…

Your Say
What was the best excuse, biggest compromise or craziest little white lie you’ve ever used to get a game of golf? What was the result? Email us at ed@insidegolf.com.au and share your story